Recep Tayyip Erdogan and US Secretary of State Rex Tillerson kept mum after meeting at the presidential palace in Ankara. The talk between the top US diplomat and Turkey's president was said to address regional tension. 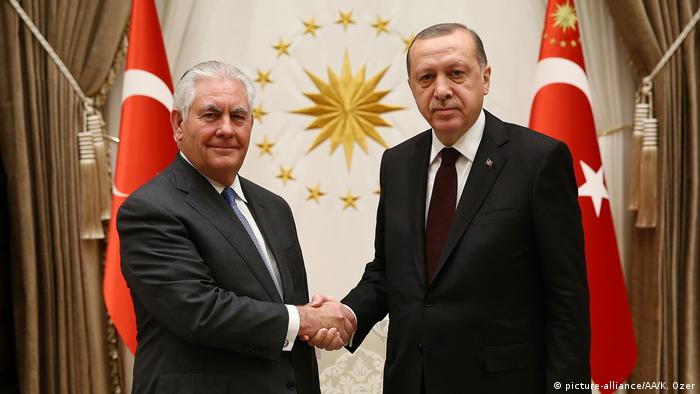 On his first day of a two-day stopover in the Turkish capital of Ankara, US Secretary of State Rex Tillerson met with Turkey's president, Recep Tayyip Erdogan, on Thursday evening to address opposing positions and demands over Turkey's incursion into the Afrin region in Syria.

Though the tension between the two NATO allies had been aired even before Tillerson arrived at the presidential palace, few details were available as both sides declined to comment on the more than three-hour-long, closed-door session.

"Not tonight, we're still working," Tillerson told inquiring reporters as he arrived at his hotel, The Associated Press reported. 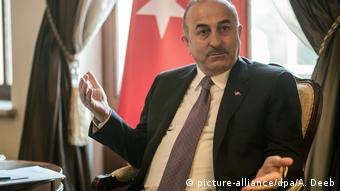 Foreign Minister Mevlut Cavusoglu, the only other person present at the discussion, translated

Erdogan also refused to comment, though a presidential source said the discussion with Tillerson encompassed Iraq, regional developments and the fight against terror, in addition to the situation in war-torn Syria.

The source also said the Turkish president clearly conveyed priorities and expectations to Tillerson on these issues.

A US State Department spokesperson said Erdogan and Tillerson had a "productive, open conversation" about improving relations between the US and Turkey.

Read more: US and Turkey at odds in Syria ahead of Rex Tillerson's visit

Take back arms, or no arms given?

On Thursday morning, Turkish Defense Minister Nurettin Canikli had demanded after a meeting in Brussels that the US "completely end its relationship with the YPG." The YPG, or the People's Protection Units, is a Kurdish militia group that Turkey is fighting in the Afrin region over its border with Syria. Turkey considers the YPG to be a terrorist organization because of its ties to Kurdish militants within Turkey, who are waging an insurgency against the government.

Turkey has accused the US of providing massive amounts of heavy arms to the YPG, which is a US ally in the fight against the "Islamic State" (IS) in Syria, and called on Washington to take them back.

However, speaking in Lebanon earlier on Thursday, Tillerson denied the allegations.

"We have never given heavy arms to the YPG so there [are] none to take back," he said from Beirut. 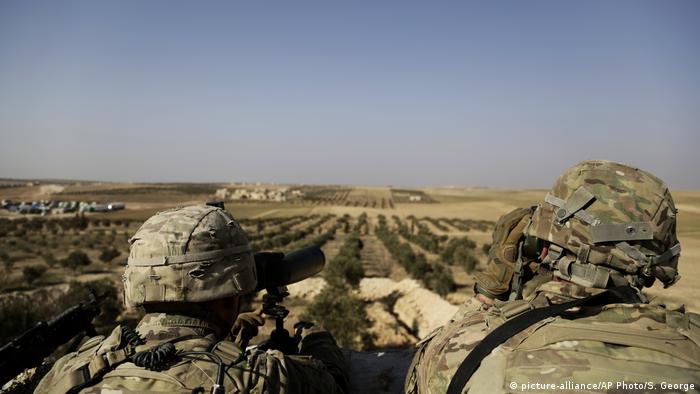 US troops maintain bases near the town of Manbij, near the Syrian border with Turkey

Analysts have described the tension between Turkey and the US to be at its highest point since 2003, when Turkey denied permission for American troops to operate on its territory during the Iraq war.

Other points of conflict between Washington and Ankara include the presence of US troops in Manbij, a Syrian town held by the US-backed Syrian Democratic Forces, a group dominated by the YPG.

On Friday, Tillerson will meet with Turkish Foreign Minister Mevlut Cavusoglu, who was also present at Thursday's bilateral talks. A news conference is planned afterward.

The secretary of state's trip to Turkey is part of a five-day tour of the Middle East.

Before departing Beirut for Ankara, Tillerson used his meeting with Lebanese Prime Minister Saad Hariri to warn that Iran-backed Hezbollah's involvement in Lebanon threatened its security.

"Hezbollah is not just a concern for the United States," Tillerson said alongside Hariri. "The people of Lebanon should also be concerned about how Hezbollah's actions and its growing arsenal bring unwanted and unhelpful scrutiny on Lebanon."

He added that Hezbollah's regional involvement, such as its fighting presence in Syria, "has destabilizing effects in the region."

The US regards the armed Shiite group, part of Hariri's coalition government, as a terrorist organization and has sanctioned associated individuals. The administration under Donald Trump also has taken a hard-line position toward Hezbollah's backer, Iran.

Tillerson also said the US was engaging with Lebanon and Israel to prevent border conflicts.

Thursday's meeting in Beirut was the first visit of a US secretary of state to Lebanon since 2014.