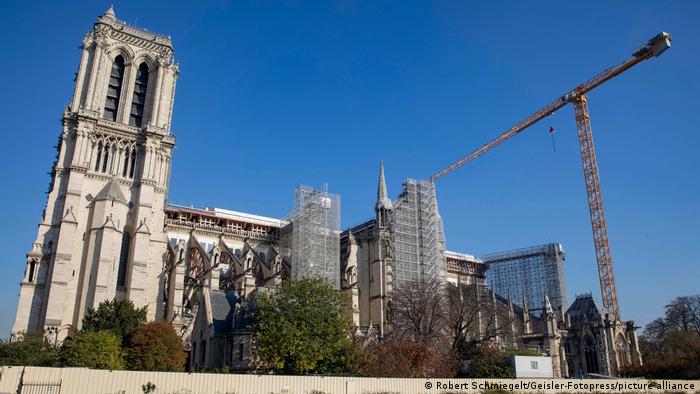 The reconstruction work on the Paris Cathedral is in full swing

Barbara Schock-Werner, the former master builder of Cologne Cathedral, can still  remember her dismay when she heard Notre Dame de Paris had caught fire: "I sat in front of the television and watched the cathedral burn, completely terrified."

When the top of the tower over the crossing broke off and fell through the vault into the Gothic nave, it was "a shock" for the art historian. She immediately knew that she had to offer to help with the church's reconstruction.

A symbol of European culture

The Paris cathedral is known worldwide, and the landmark has an enormous cultural importance.

French novelist Victor Hugo (1802-1885) immortalized the magnificent church in his 1831 novel, "The Hunchback of Notre Dame." The Austrian composer Franz Schmidt (1874-1939) wrote the romantic opera "Notre Dame" based on Hugo's novel, and the book has been adapted for film several times since.

Rising majestically above the historic center of Paris, the cathedral built from 1163 to 1345 remains one of the most important symbols of French cultural identity.

When the images of the burning cathedral spread around the world three years ago, they triggered a worldwide outpouring of sympathy — and a wave of willingness to help.

Several Germans also donated to the cause, collecting around €700,000.

Three days after the Paris fire, Barbara Schock-Werner was appointed coordinator of German aid by Monika Grütters, then Minister of State for Culture.

This Man Saved Notre Dame Cathedral Without Knowing It

The world watched the blaze live

At the time of the fire, the roof truss and crossing tower were being renovated, and part of Notre Dame was under scaffolding.

A guard had checked the church following a first fire alarm on April 15, 2019, without finding anything. But a few minutes later, the error was discovered.

By the time the church was evacuated, the flames had already ripped through the entire roof structure above the nave. Hundreds of firefighters were already on site when the crossing tower, the highest part of Notre Dame, collapsed at 7:56 p.m. TV cameras captured the entire disaster. 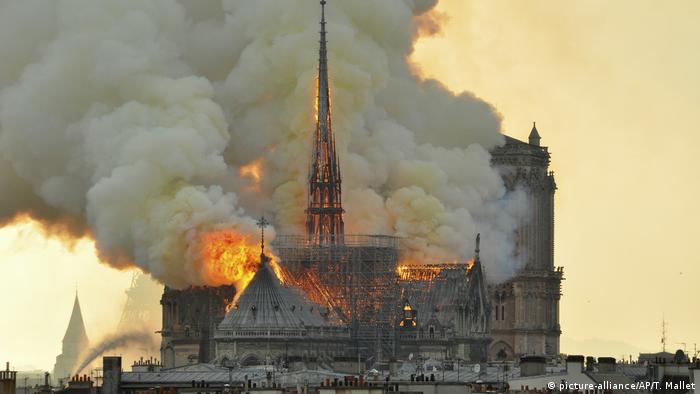 The Notre Dame blaze in April 2019 shocked the world

The blaze lit up the evening sky over Paris; people in the city's streets watched in shock. Could "Our Lady of Paris" still be saved?

The next morning at 9.50 a.m., more than 12 hours after the fire had started, the fire brigade reported that the flames had been completely extinguished.

'The miracle of Notre Dame'

Was it a short circuit? Or did a construction worker's cigarette trigger the catastrophic fire?

To this day, investigators have not managed to clarify the cause of the accident. 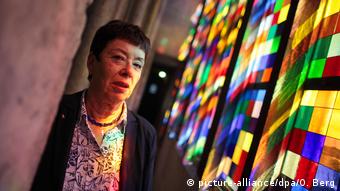 Immediately after the fire, Barbara Schock-Werner made an initial assessment of the damage. The destruction could have been worse: "Thank God not all the vaults collapsed," she says. Only three of them came down.

At first she believed that the Gothic Virgin Mary statue was definitely destroyed: "But although the crossing tower collapsed next to the statue, nothing happened to it," says the Cologne expert. "That's the miracle of Notre Dame."

One problem ensued from extinguishing it: "The building is still very, very wet today," says Schock-Werner. It could take up to 10 years for everything to dry up. 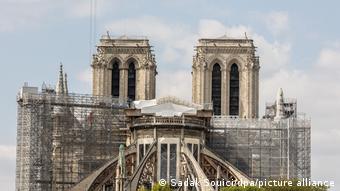 Scaffolding around the church in 2021

This doesn't bode well for the restoration work: "What's being painted, chiseled and whitewashed there won't last long," says Barbara Schock-Werner, "because the moisture in the masonry will eventually loosen it again."

The restoration of Notre Dame quickly turned out to be a huge project — on a logistic, financial and political level.

The first step was to secure what was left after the fire: All the windows had to be removed, the window structures were reinforced. Pillars were added to reduce the pressure on the walls' buttresses.

The scaffolding for the crossing tower, bent by the heat, had ended up resting on the vaults and had to be taken down carefully. "It took the whole first year, because there was always the danger that the other vaults would collapse." 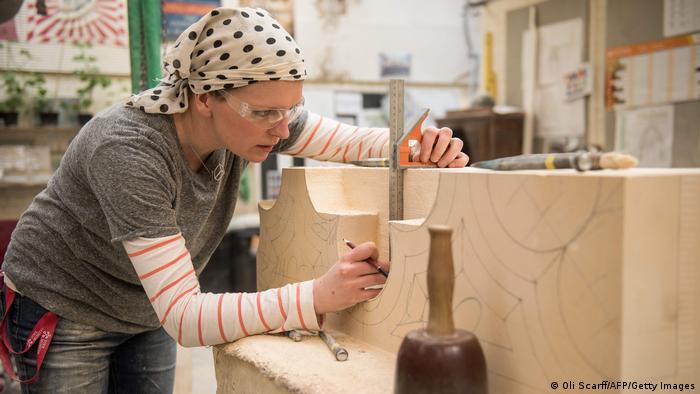 A stonemason working on the restoration of the Gothic cathedral

When Germany's Cologne cathedral experts announced that they were restoring stained-glass windows of Notre Dame, it caused outrage among their French colleagues, who thought their jobs were being stolen, reports Schock-Werner. But she was able to calm them down down by insisting that she and the German team were simply participating in the restoration project.

To this day, the four windows made of 300 individual panes by the glass painter Jacques Le Chevallier (1896-1987) have not yet arrived in Cologne. Barbara Schock-Werner points out that the process requires "more diplomatic caution."

Working on the main organ

Three years after the devastating fire, the restoration of the main organ has now begun. It was largely spared from the flames, as well as from the extinguishing work. But it was covered by a poisonous lead dust.

Its 19 windchests are currently being restored in a workshop. Another workshop is freeing the 8,000 pipes of the instrument from toxins. More parts of the organ will gradually be restored. The four big organ bellows will be worked on during the summer. 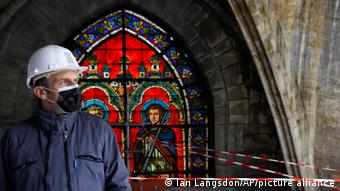 Emmanuel Macron's promise to make the cathedral accessible again by the start of the Olympic Games in spring 2024 adds to the pressure of an already complicated process, points out Barbara Schock-Werner.

It is unclear whether the roof truss will be ready by then. The windows are to be installed again by spring 2023. The scaffolding then has to be removed in order to be able to install and tune the restored organ.

So it may take a while before Notre Dame shines in its former glory. But, according to the current plan, the cathedral will be accessible in 2024.

Two years ago, Notre Dame Cathedral in Paris was in flames. What has happened since then and how long will the reconstruction take?

Notre-Dame: A Virtual Tour of the Ruined Cathedral