Germany's "bling bishop" might get off without paying damages to his diocese if a report in the mass-circulation "Bild" is to be believed. Franz-Peter Tebartz-van Elst had lived large in a 31.3 million-euro residence. 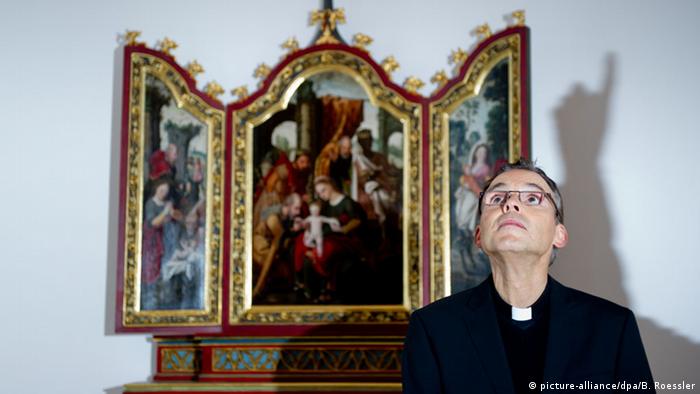 On Thursday, the mass-circulation newspaper "Bild" reported that the disgraced bishop would not have to pay damages for going about 25 million euros ($28 million) over budget. Quoting a Vatican insider, the Thursday edition of the newspaper, Germany's biggest by circulation, reported that Pope Francis had made the decision back in July.

The professed papal confidant reportedly told the newspaper that Francis made the decision "out of sympathy and not out of a sense of justice."

According to the newspaper, German officials of the Catholic Church have already been informed. Limburg Diocese administrator Manfred Grothe is expected to formally announce the decision in December, "Bild" reported.

In a German-language tweet, however, the diocese announced that it had heard no report from the Vatican on any decision regarding Tebartz-van Elst.

The Limburg Diocese had asked the Vatican to make Tebartz-van Elst, who became known as the "bling bishop" for his love of the good life on the church's tab, responsible for his extravagance - paying millions of euros in damages. Assigning outstanding debts to individual bishops would have set a new precedent. Debts generally go to dioceses, as in the cases of damage awards to victims of Catholic sexual abuse that had been hidden by church officials.

As bishop, Tebartz-van Elst was no stranger to scandal: In 2012, he lied to a German court about the travel class in which he had flown to India while on official church business and paid a 20,000-euro fine for perjury. In Germany, the Catholic Church receives some of its funding through taxes withheld by the state from declared believers, leading to an intertwining of civilian law and ecclesiastical affairs.

The 31 million-euro residence was the nail in Tebartz-van Elst's coffin during his career as bishop, however. He offered his resignation in the fall of 2013, and Pope Francis accepted the offer in March 2014.

Tebartz-van Elst remains active in the church and on its payroll, receiving about 10,300 euros a month - 7,296 euros of which is his pension from Limburg - and is currently serving on a papal evangelization council at the Vatican proper. He had no immediate comment on the pope's decision, the newspaper reported on Thursday. The diocese has also not commented on the pension payments; the average monthly pension amounts to just over 2,500 euros in Germany.

Earlier this year, it emerged that the Cologne archdiocese held over 3 billion euros in assets.