A German public broadcaster reports that North Korea used its Berlin embassy to acquire high-tech equipment. The domestic intelligence agency believes that the technology was used for missile and nuclear programs.

North Korea procured equipment and technology for its ballistics missiles program using its embassy in Berlin, the head of Germany's domestic intelligence agency, the BfV, told the public broadcaster NDR in a documentary aired late Monday. 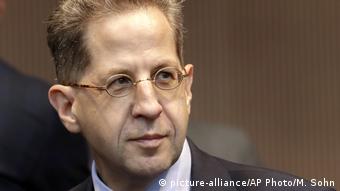 'We can't guarantee that we will be able to detect and thwart all cases': BfV head Hans-Georg Maassen

"We determined that procurement activities were taking place there, from our perspective with an eye on the missile program, as well as the nuclear program to some extent," BfV head Hans-Georg Maassen told NDR.

Although he did not say exactly what kind of technology and equipment was procured, Maassen said they were dual-use goods that could be used for civilian as well as military purposes.

"When we detect something of this sort, we prevent it," he said. "But we can't guarantee that we will be able to detect and thwart all cases."

Read more: US calls on Germany to cut diplomatic ties with North Korea

Maassen also noted that the parts for Pyongyang's programs "were acquired via other markets, or that shadow firms had acquired them in Germany."

The BfV obtained information on North Korea's procurements in 2016 and 2017, according to an investigation by NDR. These items were reportedly used for the country's missile program.

In 2014, a North Korean diplomat reportedly tried to obtain a "multigas monitor," which is used in the development of chemical weapons.

The BfV's accusations follow a UN report a UN report that North Korea had been flouting sanctions.

The United Nations found that the country had continued to export coal, iron, steel and other banned commodities — earning $200 million (€160 million) in revenue in 2017.

North Korea sold a ballistic missile system to Myanmar and may be helping Syria with a chemical weapons program, according to the report.

Over the past year, the United Nations has repeatedly tightened sanctions on North Korea in response to leader Kim Jong Un's continued ballistic missile and nuclear tests.

Berlin hostel over N. Korea link will be closed

The German government will shut down a Berlin hostel after it emerged that the site is North Korean embassy property and had been leased in violation of UN rules. (11.05.2017)