Two entrepeneurs are renting thousands of living Christmas trees to homes across Germany - in a bid to reduce the number of wasted firs after the festive season. Environmental groups are skeptical. 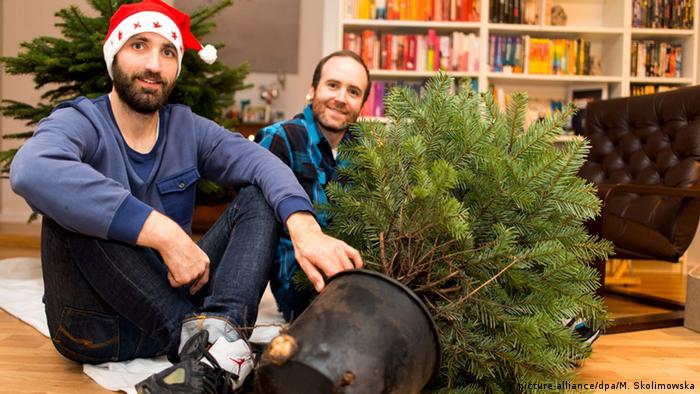 Nat King Cole sang about it and Brenda Lee rocked around it - for most people, Christmas without a tree would be no Christmas at all. Possibly dating as far back as the 15th century in Germany, the tree tradition became a fixture in many Christmas celebrations when its popularity began to spread in the 19th century.

According to the German Federal Association of Christmas Tree Growers, 2014 saw the sale of between 23 and 25 million real Christmas trees, generating profits for the German Wood Association (HDH) of around 700 million euros ($760 million).

In Germany, the tradition for many families is to not decorate the tree until Christmas Eve. By January 6, however, Christmas is over for another year and millions of trees are discarded along with piles of wrapping paper and left over lebkuchen.

'Trees should be happy at Christmas' 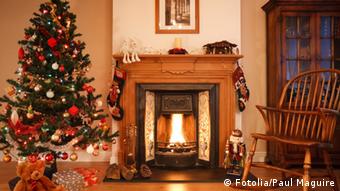 But now a start-up in the western German city of Düsseldorf has broken with tradition with its Christmas tree rental service. "Happy Tree" last year rented 400 trees to the people of Düsseldorf and nearby Cologne, and is this year set to deliver around 3,000 firs to living rooms across 12 German cities.

Behind the project are Jan Weymeyer and the aptly-named Sebastian Schönfeld, ("pretty field" in German). Walking through Düsseldorf city center shortly after Christmas last year, the two entrepeneurs said they were left feeling wistful at the sight of all of the abandoned Christmas trees on the roadside.

They decided that something had to be done to reduce the number of trees left out so "unromantically" on the sidewalk, "Happy Tree" spokesman Sebastian Rabe told DW. "At Christmas, the trees should be just as happy as the people," Rabe said.

The rented Nordmann trees are grown in huge pots in the Netherlands from where they're transported to homes in northern and western Germany. 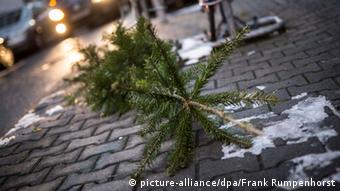 The earliest delivery is December 18 and all of the trees are re-collected no later than the Christian Epiphany - on January 6. After being returned to the outdoors, the trees are re-rooted and are left to recover from the festive season.

"We don't leave the trees with our customers for too long," Raube said. "Then they can get outside again in the fresh air as it's stressful for the trees at Christmas."

Around three-quarters of the trees survived the experience last year, "Happy Tree" told DW, but the firm hopes to boost that to 90 or even 95 percent in the future.

Rabe said the company also wants to increase the survival quota by fine-tuning potting methods in the coming year.

One of biggest stress factors the trees face before they are re-rooted is the sudden change in temperature when they are moved inside or outside. But with temperatures in western Germany currently at an unseasonably warm 13 degrees Celsius (55.4 Fahrenheit) Rabe said that won't be such a problem this year.

But any Happy Trees that don't make it through the Christmas season are shredded in the same way as other Christmas trees, he added.

Some environmental groups are skeptical of whether renting a living Christmas trees is really much more beneficial for the environment.

"I'm not sure how profitable it is for the consumer or the environment," Hans-Georg Dressler, spokesman for the German Christmas Tree Growers Association, told DW. 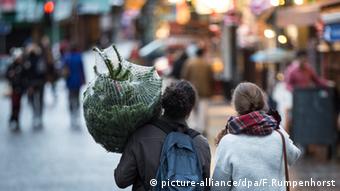 At 60 to 85 euros, Dressler said the trees were "very expensive" and the delivery and collection process "adds to emissions."

Michael Bilharz - who works for Germany's Federal Environment Agency researching sustainable consumer structures - shared Dressler's concerns. He told DW that using a car to buy a tree from a local gardener or having a Christmas tree delivered were likely to have the same environmental effects.

Hoping to continue to expand their start-up to other corners of Germany, including Munich and Berlin, Happy Tree said however that they will work in partnership with regional tree nurseries to "uphold their principles of sustainability" and minimize the distance traveled by their delivery vehicles.

Despite the reservations of German environmental experts, similar projects in the US, the UK and Switzerland have been growing trees for temporary festive use for a long time. As the world's fourth greenest country - according to the 2014 Global Green Economy index - it's now Germany's turn to test out the "sustainable Christmas" trend.

Word of the Week: Tannenbaum