Renowned imam calls on Muslims to engage with France | Europe | News and current affairs from around the continent | DW | 05.12.2020

Prominent Islamic scholar Muhammed Abu Zaid has urged Muslims in France to cooperate with the government. But he told DW that the authorities should also foster dialogue with the Muslim community. 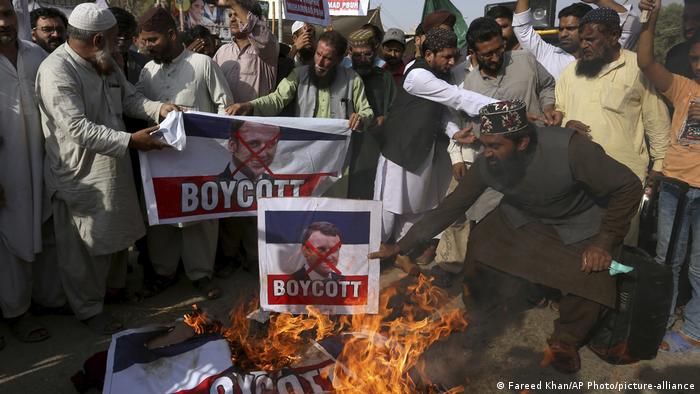 Emmanuel Macron's measures to fight Islamist extremism have led to protests like the ones in Pakistan shown here.

France's latest steps in combating Islamist extremism at home have been closely monitored in Arab countries. The brutal killing of French teacher Samuel Paty, who had shown his pupils cartoons of the prophet Muhammad in class, prompted French President Emmanuel Macron to defend the use of the cartoons and France's secularism, which in turn triggered anti-French protests in many Muslim countries.

Macron's statements that he saw "Islam as a religion in crisis" fanned the flames further, as did his interior minister's recent announcement on the potential closure of nearly 80 mosques in France. 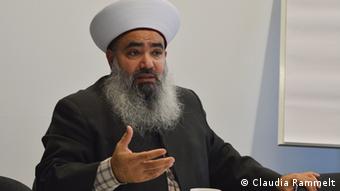 Mohammed Abu Zaid, imam and judge in Lebanon, urges dialogue on both sides

Voice of peaceful dialogue in Lebanon

Sheikh Mohammed Abu Zaid, Chairman of the Sunni Court and imam of the largest mosque in Saida, near Beirut, however, believes that only peaceful collaboration will improve relations. "Using the state's power and authority will do the opposite," he told DW.

Abu Zaid is widely known as an Islamic scholar focused on dialogue. He is the author of 18 books advocating for a moderate, peaceful Islam and dialogue with non-Muslim or minority-Muslim countries. He has also taught at Stanford University in the US, and was among the first imams to travel to Denmark after protests erupted over the publication of cartoons of the prophet Muhammad in 2005.

"Muslims and the French government need to focus on three aspects," the prominent imam believes. Firstly, he sees the necessity for the French government to be open to the Muslim community of around six million people in France — Europe's largest — by collaborating with their leadership. "Otherwise, people will feel over-ruled," he said. Secondly, he recommends that imams be trained and qualified in the country they live in.

Thirdly, he says, it's crucial to raise awareness that closing mosques will only lead to new problems. "People will not stop praying or listening to imams, they will just do this secretly."

Mohammed Abu Zaid's opinion is rare in the Islamic world. "Fanatics will accuse me of being weak and of giving in to the French authorities," he says.

In the history of strictly secular France none of the around 2,600 mosques and prayer rooms, including their privately employed imams, have been inspected by the state, but Abu Zaid believes the state should take on that task. "As a man of responsibility and long experience I think this is the right way," the 45-year-old imam says.

'You are French citizens'

Abu Zaid sends a clear message to Muslim immigrants to "see themselves as part of the country they live in and not just as visitors." From Abu Zaid's point of view, the religious Muslim community needs "to defend the country that welcomed you and gave you citizenship."

He also deliberately addresses French Muslims, telling them that "you are French citizens, you should not bring your Turkish, Indian, Pakistani or Lebanese customs but you should live according to the new country."

Abu Zaid says he is in favor of a charter that the French Council of Muslim Worship (CFCM) has been working on since mid-November. It is meant to reflect and "recognize the values of the Republic" and is expected to be submitted to the government on December 7.

While the charter, which Macron had urged the CFCM to hammer out in cooperation with the interior ministry, is seen critically in many Muslim countries, Abu Zaid welcomes its message. "Imams need training, this is not about control but about awareness what is legal and what is illegal in a country," he said.

"I come from a family of poor carpenters," Abu Zaid explains. While his parents insisted that he and his three sisters study, he is the only one who chose a religious life. After his bachelor's degree in Islamic Sharia law at the Beirut Islamic University, he did a postgraduate degree in Comparative Religions at the University of Saint Joseph, a Catholic university in Lebanon.

"I understood that Christian-Muslim dialogue is the basis for a peaceful understanding," he says. Although he is the head of the largest mosque in Saida, he doesn't put pressure on his own four children to pray at the mosque.

"Sometimes they go, but much more often they don't go," he says, adding that he is "very open-minded" and that he gives his children "the same chance that I had." For him it means to "give them a choice" and "not push them to be religious."