A large blaze has ripped through an iconic building at the Glasgow School of Art for the second time in four years. The premises were due to reopen next year following a major restoration project. Fire engulfed one of the world's top arts schools in the Scottish city of Glasgow early on Saturday, and then spread to other nearby buildings, emergency services said.

Smoke and flames billowed from the Glasgow School of Art's Mackintosh building before extending to the O2 Academy concert venue and a nearby nightclub.

The Scottish Fire and Rescue Service said no casualties had been reported, but dozens of nearby residents were evacuated from their homes.

The service said on Twitter that more than 120 firefighters were tackling the blaze, which it described as an "extremely challenging and complex incident."

The blaze was the second to strike the Mackintosh building after fire broke out four years ago, which led to a multimillion pound project to return it to its former glory.

Eyewitnesses told the BBC that the fire looked "much worse" than the last one.

Local resident Connor Neil said a "big orange light" coming from the school could be seen from streets away.

The cause of the blaze was not immediately clear. 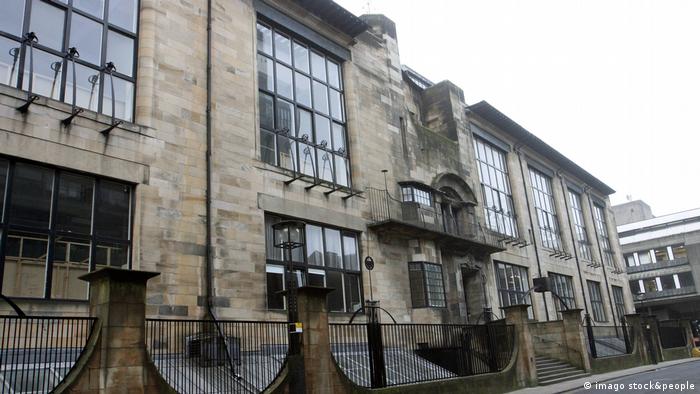 Scotland's Daily Record newspaper reported that the blaze appeared to engulf the entire building, leading to concerns it may never be able to be fully restored.

The building, one of the most famous in Glasgow, was built at the turn of the 19th century, and is often considered the masterpiece of architect and designer Charles Rennie Mackintosh.

Paul Sweeney, a local MP for the opposition Labour party, tweeted that the structure was the most architecturally important building in the city. "We cannot lose this building," he wrote.

Local resident John McInnes told the UK's Press Association: "I can't believe that this has happened again to such an iconic building. It's unbelievable.

"Questions need to be asked, they spent so much on renovation, but this seems so much worse than the last one."

Read more: Is the Scottish National Party 'on the sidelines' of politics?

Scotland's economy minister has warned London against failing to safeguard the country's iconic beverage after Brexit. Roughly one-third of all exported Scotch arrives in EU countries, making the bloc its largest market. (30.07.2017)

After trips to France, Russia, the Netherlands and others, DW's Fanny Facsar encountered a very different modern form of nationalism in Scotland. What's driving the SNP's success, and will Brexit break up the UK? (08.06.2017)

Queen Elizabeth II has died at Balmoral in Scotland aged 96. Her death has plunged the United Kingdom into mourning: They loved their long-serving monarch. For many, she was the embodiment of the country.

Shootout in Seville: Europa League glory for Eintracht Frankfurt after victory over Rangers 18.05.2022

Ukrainian supporters at home and abroad celebrate their team's victory over Scotland 02.06.2022

Ukraine supporters in Kyiv, Glasgow, and even in the trenches on the frontline in Kharkvi watched with glee as their country celebrated a vital qualifying victory over Scotland. Their dream of a place at the 2022 World Cup in Qatar is still alive, with one final match still left to play against Wales on Sunday.