#NewNationalism - what sets Scottish nationalism apart? | World| Breaking news and perspectives from around the globe | DW | 08.06.2017

After trips to France, Russia, the Netherlands and others, DW's Fanny Facsar encountered a very different modern form of nationalism in Scotland. What's driving the SNP's success, and will Brexit break up the UK? 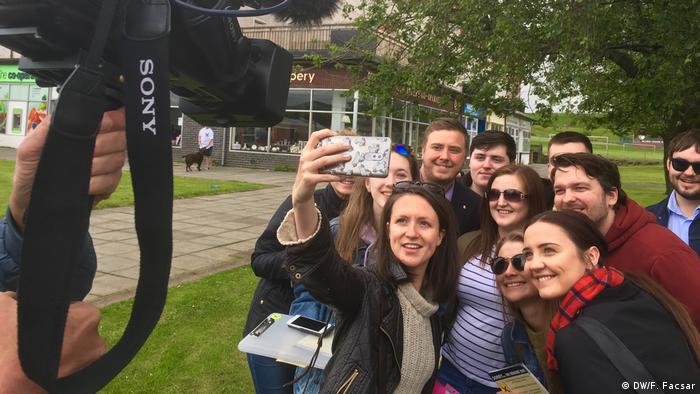 What does "nation" mean in Scotland. I wanted to find out in Glasgow, Scotland's most populous city. For more than 300 years Scotland has been a part of the UK, and voted 55-45 to stay that way in 2014. But with Brexit looming, the Scottish National Party (SNP) is pushing for another vote, saying the situation has now changed. It wants to leave the UK before the UK leaves the EU. Ahead of the national elections, Britain's Prime Minister Theresa May rejected the SNP leader Nicola Sturgeon's calls for a second independence referendum.

And this is just one of the reasons why Rhiannon Spear, a young SNP campaigner, is fed up with Westminster and what she calls "system UK."

"England makes decisions on our behalf. We want to represent Scotland and the needs of the Scottish people”, she tells me. Rhiannon was only 12 when she became interested in the SNP. That was in 2003. Back then hundreds of thousands, especially young people, took to the streets across the UK to protest Britain's decision to invade Iraq.

"That was the first time when I noticed that the English parliament in London is making the decisions regardless of what we vote for in Scotland." And once again, with Brexit, Rhiannon feels hijacked by a decision made in large part by England (and Wales) to leave the EU. In Scotland (and Northern Ireland), a majority voted to remain.

Listening to her, her pro-EU stance, her reference to the SNP's form of nationalism as "progressive, because we want to put everyone in Scotland first, regardless where they are from," I am reminded that nationalism can take many guises. 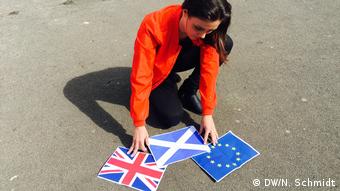 I accompanied Rhiannon to Kelloholm, a small town south of Glasgow, that belongs to the only constituency in Scotland which voted for the Conservatives during the 2015 national elections. So I was expecting doors to be slammed in her face. But that didn't prove to be her biggest challenge. With five different referendums or elections in Scotland since 2014, including Thursday's general election, people are simply getting tired of voting.

And another challenge has presented itself in recent weeks: "We have to tone our campaign down due to the terrorist attacks in Manchester and London," Rhiannon says. So unlike previously when she and her colleagues walked from door to door, wearing yellow jackets (the color of the SNP) to share the message "Scotland first," this time they are not asking the question about independence. Is there in times of terror a need to pull the UK together regardless of party lines? If nothing else, Rhiannon handles the issue with care on the doorsteps.

On my return to Glasgow, I met Callum Baird, the 30-year-old editor-in-chief of "the National." That is a newspaper in Glasgow which was founded in 2014 to push for independence. Callum says that in terms of terror, Scotland will be standing with the rest of the UK, "our closest ally." But when it comes to Brexit, he says, "I would argue independence is the stable option, it means retaining our links with Europe, with a huge trading market."

At least according to the polls Scotland remains divided over the issue of independence. When it comes to "stability” and what that means for the future of Scotland, opinions differ widely.

Certainly not everyone who is young and patriotic would vote for the SNP. I learned this over a lunch with Aidan Coulter, a student in Glasgow. When asked what Scottish nationalism means to him, Coulter simply took a swig from his can of Irn Bru soda - the Scottish-made beverage often nicknamed "Scotland's other national drink," besides whisky. He wants Scotland to stay in the UK.  He is disappointed in the SNP. "They say they want to put Scotland first, but it is all about power, about putting the SNP first."

I left Scotland with the impression that there is a difference between its nationalism and other forms I encountered on previous stops.  In France for example - where the Front National wants to close borders, leave the EU and reduce the number of migrants - nationalism is more aggressive and divisive. When it comes to the agenda of the SNP, it appears to be more tolerant, EU-friendly, and open to migrants to boost their economy. But it will be important to see how the SNP's agenda develops. Critics already say that pushing for a second referendum on independence is at least questionable, given that the decision was made in a democratic process just three years ago. Although Nicola Sturgeon's party would argue that the other recent referendum, on Brexit, changed the rules of the game.