Refugee crisis puts Athens on the brink | Europe | News and current affairs from around the continent | DW | 02.10.2015

The flow of refugees through Greece is greater than ever, but bad weather and border closures threaten to strand thousands and stretch coping mechanisms beyond control. Pavlos Zafiropoulos reports from Athens. 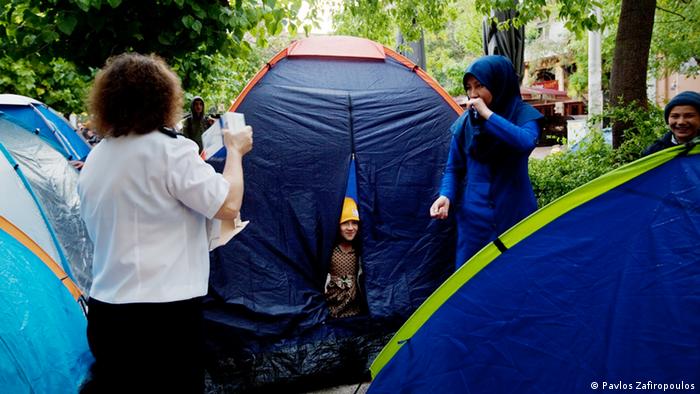 "The road was like a river. I saw babies ready to be swept away," Maria Galinou of the Greek branch of the Salvation Army told DW, recalling how hundreds of refugees had gotten caught in a sudden downpour soaking men, women and children to the bone.

"What was most difficult to see was people just sitting in the rain, in the water," added Suzanne van der Veldt, a young volunteer from Holland with the newly formed Boat Refugee Foundation. "It was like they had given up. It was very sad."

Syrian and other refugees making the long trek through Turkey to northern Europe face many obstacles: hazardous sea journeys; uncertain border crossings and miles of trudging through mud and fields. But the scenes described by the NGO workers did not occur in some remote border region, but in Victoria Square in downtown Athens.

The sudden arrival of heavy rains in Greece after months of dry weather was a stark reminder that as winter approaches, it will only amplify the difficulties facing the refugees pouring into the country, as well as those seeking to manage the crisis.

While the flow of refugees and irregular migrants into Europe is by no means a new phenomenon, 2015 marked a step up in the scale and nature of the problem - and particularly so for Greece.

According to the International Organization for Migration (IOM), from January to September 29, an estimated 526,577 people had entered Europe by sea. That is more than double the number that made similar crossings in the entirety of 2014. 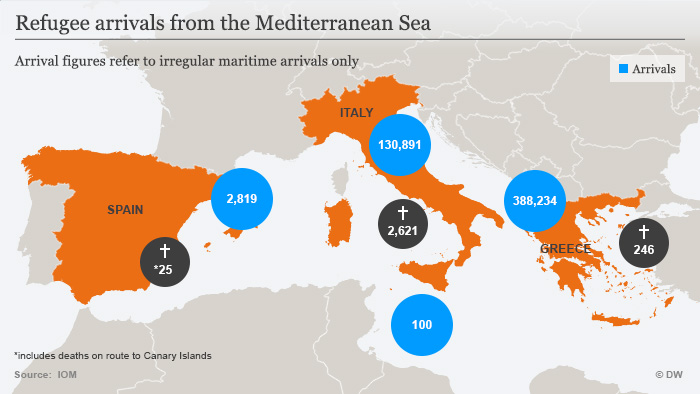 And by far the largest increase has been seen in the flow of people entering Greece via the islands in the Eastern Aegean, such as Lesbos, Samos, Kos and Chios. To date in 2015 over 338,000 refugees and migrants are estimated to have entered Greece by sea, compared to Italy's 131,000.

According to Daniel Esdras, the Chief of Mission of IOM Greece, the upward trend in arrivals shows no sign of abating. "By the end of July, the average number of arrivals was 2,000 per day," he told DW. "By the end of August it was over 5,000 and now it is close to 6,000. So we have seen an enormous increase. By the end of the year we will surely have received over half a million."

That the unprecedented number of refugees arriving in the Greece - among whom are many women, children and disabled individuals - has not led to an even more dramatic humanitarian crisis is due in no small part to the efforts of numerous NGOs and thousands of volunteers who have fed, clothed and attended to the needs of tens of thousands of desperate individuals.

Yet equally important is that the majority of migrants and refugees entering Greece have sought to leave the country as soon as possible to continue their journeys. While there are fewer concrete statistics, some experts believe that as many as 70-80 percent of those who have arrived in Greece have already left. The main route currently being used by migrants is through the former Yugoslav Republic of Macedonia into Serbia and then on to northern Europe.

In Athens, the sense of a population on the move is present wherever refugees and migrants congregate. In Victoria Square the number of people sleeping rough has ebbed and swelled in recent weeks as ferries chartered by the government bring in migrants in from the islands, while a constant stream continues to head northwards. As well as a makeshift camp, the square has been an informal hub where migrants meet with people smugglers. 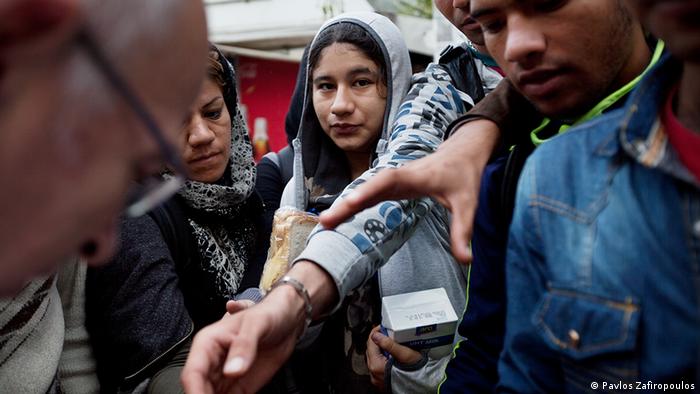 The constant presence of large numbers of people in a small city square with no basic facilities has resulted in squalid conditions, and raised tensions with the local community - problems compounded by the recent rain. The Interior Ministry has in recent days sought to move people out of the square into hastily created temporary shelters, chiefly in unused stadiums.

On Wednesday afternoon in the Hellinikon Olympic Hockey Center, originally built for the 2004 Athens Games, several hundred refugees queued for a free hot meal at the concession stand-turned impromptu soup kitchen. Here the refugees could sleep indoors (albeit on the floor) and have access to doctors, showers and toilets.

Among those in the shelter was Farhad, 22. Like many of the poorer asylum seekers in Athens unable to rent accommodation, he is Afghani. He says he is waiting for money to be sent from his brother so he can continue his journey to Germany. But without a passport he must rely on intermediaries to make the transaction for him and for that there is a waiting list. "Athens is very busy," he said. "There are many people from Iraq, Iran, Afghanistan in Victoria and they all wait for money from their families."

According to ministry sources, the government hopes to open 4-5 temporary shelters in Attica. Yet even the largest of these centers can only currently offer shelter to 1,000 individuals; the Hockey Center itself can only host 500 and is due to close in a month. That means that the planned temporary shelters in Athens will, at best, be able to house fewer than 5,000 people at a time, or only about one day's worth of current migrant arrivals.

The major fear now is that if the main northern migration routes are cut due to bad weather or border closures, Athens will find itself swamped with tens of thousands of impoverished refugees in the middle of winter.

Aside from a dire humanitarian situation, that would also likely cause an increase in abuses such as sex trafficking, according to Heracles Moskoff, the National Coordinator to Combat Trafficking in Human Beings. "Such a situation would undoubtedly create a vulnerable population of refugees and migrants and we know that such vulnerable people are often exploited by criminal elements," he told DW. Organized crime has already made untold millions from the refugee crisis, with people smugglers charging over 1,000 euros ($1,117) per person just to make the crossing from Turkey to Greece. 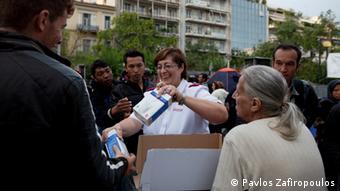 The Greek government only has limited accommodation for the refugees

The crisis also looks set to dwarf the emergency relocation plan agreed last month by a fractious EU to resettle 120,000 refugees from Italy and Greece over the next two years. EU funds promised to assist frontline countries have also yet to materialize.

"There is no plan B, there isn't even a plan A," Daniel Esdras said, referring to the impact of possible border closures in Greece. "It's impossible [for Greece] to cope, there are too many. We are talking about 5,000-6,000 per day. No one has seen those numbers. Only Greece."

Meanwhile an estimated 2 million largely Syrian refugees remain in perpetual limbo in Turkey, while tensions between the US and Russia over the war in Syria make a lasting solution to the refugee crisis seem more distant than ever. And despite the Mediterranean Sea being by far the deadliest border to cross in the world, the rubber dinghies keep coming.

"To all journalists I say one thing," Esdras told DW. "If you want to help, write one thing: Stop the war. Write it in big letters. Because that's the solution."