′Ready for change′: Pirate Party is the real winner in Berlin state election | Germany | News and in-depth reporting from Berlin and beyond | DW | 19.09.2011

'Ready for change': Pirate Party is the real winner in Berlin state election

With 8,9 percent of the vote, the Pirate Party has successfully cleared the five-percent hurdle to win seats in Berlin's state parliament. It's the party's chance to make its debut in Germany - but what is its platform? 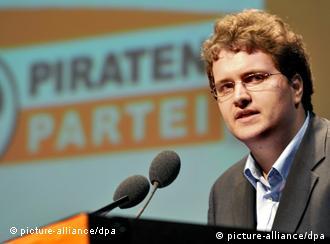 Just a few weeks ago, election observers would have hardly thought the Pirate Party, which stands for free wireless Internet service for all, unlimited access to public transportation funded by taxes and better data protection, stood a chance to clear the Berlin state parliament's five-percent hurdle. But the party took that hurdle with ease, winning 8,9 percent of the vote. Party leader Sebastian Nerz told Deutschlandfunk radio that his party is prepared to prove that it is up to serious politics.

Deutschlandfunk: Transparency, that is making all data public and granting a free internet are your party's favorite issues - what else do the Pirates have to offer?

Sebastian Nerz: First and foremost, the Pirate Party is a party of basic rights. We try to focus on civil rights because that is an area that politics has neglected.

That seems a bit vague - all democratic parties are committed to protecting basic rights. Where do you think they have been negligent?

Everywhere! Over the past few years, there has been new security legislation, tightened surveillance and cutbacks of basic rights; some of the laws were passed without real discussion or debate. The question is, are existing laws being applied in a reasonable manner. The current debate is about data retention, with a majority of Bundestag parliamentarians in agreement that data retention is a great idea - but they never checked out whether such measures are really necessary.

But the Pirate Party also advocates weakening copyright laws to make more content freely accessible in the internet. Many scientists, artists and writers see that as a difficult issue. Aren't you curtailing basic rights if you limit the protection of copyright?

Most of the scientists I have talked to are very open-minded where open access is concerned. And we don't want to do away with copyright; we just want to make sure it is reformed. Neither the artists nor consumers are being treated fairly.

Those are some of the issues your party plans to make public nationwide. Then, there are demands that aren't necessarily part of the national party program, for instance free public transportation in Berlin, granting an unconditional basic income and liberalizing cannabis consumption. How is that supposed to suit the Pirates on a national level?

It's a very good match. On a national level, for instance, we have agreed on ReSET, that is an unconditional basic income for everyone. Free-of-charge public transportation could be part of that. Being able to move around freely in Germany is really a basic right, even if it is limited by relatively high fees. If you look at how much money is spent on ticket controls, free public transportation doesn't sound that bad.

It doesn't sound bad, but in view of Berlin's budget deficit, it is quite naive.

Of course free public transportation would be relatively costly at the beginning. But look at how much money the state pumps into individual transportation, for instance by building roads, and if you take into consideration that citizens are already footing the bill for public transportation - by buying tickets or paying taxes - I don't think that's really out of touch with reality.

Many protest parties were a disappointment when confronted with reality. How are you going to avoid that?

We'll try to continue what we've been doing all along. We try to make our structures transparent and open, we talk to people and within the party we're involved in intense discussions about what we do. Right now, we're trying not to get carried away. And if we manage that, I believe we won't have a problem being successful.

Over the past few years, the party has been beset by internal bickering and fighting, chaotic party conventions and a change in leadership. Is that what the Pirate Party can look forward to over the next few years?

Changes in leadership are not at all dramatic in the Pirate Party. National and state party executive boards do not determine the directives like they do in other parties, they are agreed upon at party conferences. So a change in leadership is merely organizational and not really relevant. And bickering with a party? I would say if a party really is set up as a democracy, if people can introduce their ideas and discuss issues, it is normal to have arguments, too.

On Sunday, you compared your election victory with that of the Green Party 30 years ago. They also used to encourage party members to debate openly and freely. But that also meant it took them decades before they were ready to join a national government. Does that discourage you?

No. If you're trying to fundamentally change a political system - and after all, we're not merely trying to push political issues, we want to change the way politics are shaped in Germany - then you have to realize that it will take a long, long time. And we know that.

There is that risk. But so far, we don't have factions like they did. We have intense and lively discussions but we are aware of the fact that apart from individual discrepancies, we have a lot in common. That keeps us together and that distinguishes us from the Greens.

On Sunday, some members of your party indicated that the party was now headed toward the Bundestag. Are you not underestimating the challenge of federal elections with regional ones?

We're aware of that and we also know that, if national polls were held tomorrow, we probably wouldn't win 8.9 percent of the vote. We were told so many times that we wouldn't be able to clear the five-percent hurdle in Berlin. But yesterday, we spectacularly proved that we could. Now we can prove that we are capable of serious, long-term politics in parliament, that we are trustworthy. And if we can prove that, I believe we will manage the five-percent hurdle in national polls, too.

The Social Democrats in Berlin have held on to power in the regional government, while the Free Democrats failed to gain representation at all. Instead, Berlin welcomes the Pirate Party to parliament. (19.09.2011)

Voters in Berlin are heading to the polls on Sunday in a state election expected to deal another blow to Chancellor Merkel's ruling coalition and return the city's colorful Social Democrat mayor for the last decade. (18.09.2011)