Reading your partner's emotions well: A boon or a bane?

Empathy is important. Being able to read a partner's emotions accurately can benefit relationships. A new study shows, however, that it is sometimes even harmful to recognize correctly what your partner is feeling. 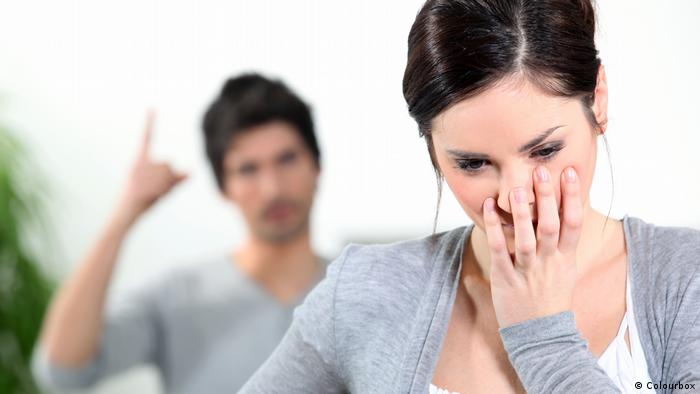 A satisfied smile and a gentle touch, or crossed arms and a mouth twisted in mockery — facial expressions and body language often say more about a person's emotional state than words can.

The correct recognition of emotions is an important basic building block in human communication — especially in a partnership. A new study by psychologists from the University of Rochester and the University of Toronto shows just how important.

The aim of the study was to find out under which circumstances a relationship benefits from partners recognizing each other's emotions, and when it suffers instead.

It concluded that relationships in which so-called appeasement emotions are correctly recognized by the partners are generally happier.

The term appeasement emotions is applied to feelings such as shame or guilt. These are two self-reflective emotions that humans develop during the first two years of life.

Read more: Scared of getting attached ⁠— Why we run away from relationships

"If you are appeasing with your partner — or feel embarrassed or bashful — and your partner accurately picks up on this, it can signal to your partner that you care about their feelings," says Bonnie Le, the study's lead author and assistant professor in the Department of Psychology at the University of Rochester.

Even the happiest relationship is not without conflict. And there are two possible paths for you to take in a dispute with your partner: claiming high social status or low status.

Claiming high status means you signal to your partner through anger and contempt that you feel you are in the right.

If, on the other hand, you show shame or a sense of guilt, you take on a low status and thus start what Dirk Eilert, a Berlin-based expert for facial expression and body language, calls a "non-verbal attempt at repair."

And that, in turn, is an indication of a functioning relationship. "Empathy is very important. If I interpret my partner's emotions correctly, then I can choose my words carefully," says Eilert. However, it's not just a matter of the right words, but also of the right moment.

"Emotionally oriented communication works so well because the partner can then follow our words more easily and digest information better. And the partner also has the feeling of being seen as a human being," says Eilert.

After all, he says, communication is not just about sending a message, but about receiving and perceiving the other person's reaction.

Another result of the study surprised the psychologists: Even the mere perception of negative feelings such as anger or contempt is destructive for the relationship.

"f you accurately perceive threatening displays from your partner, it can shake your confidence in a relationship," says Bonnie Le. Couples in which one partner feels such emotions are therefore generally unhappier. And it doesn't matter whether or not these emotions have been correctly recognized by the other.

"Disgust and contempt serve as boundaries in conflicts. They are our psychological immune system," says Eilert. If they establish themselves as a pattern in communication, this can be an indication that the relationship is heading toward its end, he says.

Honey, could you please not do that?

The psychologists also wanted to find out more about whether the correct perception of emotions had a positive effect on the desire of one partner to meet the wishes of the other.

To do this, the researchers had each member of a couple formulate a wish, in a controlled environment, for something they wanted their sweetheart to change — for example, for them to give up certain behaviors or to curb their tempers.

Why we are creatures of habit

Why we are creatures of habit

The participants then had to describe their own perception of their partner's emotions, as well as the quality of their relationship, and say whether they were motivated to fulfill the wish of the other.

Being embarrassed is worth it

The result: If you can interpret your partner's emotions well, you are still not necessarily more motivated to change your behavior at his or her wish. However, those who garnish their requests for change with a touch of embarrassment are at an advantage.

Read more: Sexual arousal disorder: No sex doesn't have to be a problem

"It's not bad to feel a little bashful or embarrassed when raising these issues because it signals to the partner that you care and it's valuable for your partner to see that. You acknowledge that what you raise may hurt their feelings. It shows that you are invested, that you are committed to having this conversation, and committed to not hurting them," says Le.

Recognizing emotions is not so easy

According to Eilert, only just under 60% of people are capable of recognizing emotions correctly on a consistent basis. This was demonstrated by an experiment in which 2,000 test persons were shown 49 pictures of culturally overlapping facial expressions and emotions. "More than every second facial expression was misinterpreted," says Eilert.

The reasons for the relatively low result are manifold. On the one hand, ever-increasing media consumption has a negative effect on people's ability to read emotions. "It is now normal for people in company to look more at their cell phones than at the faces of the other people," says Eilert.

The problem here is that the brain works less and less on correctly interpreting facial expressions and emotions and in the end forgets how to do it — a case of "use it or lose it."

How people are brought up as children is also a factor. "Our upbringing damages our perception in a certain way. As children, humans have a particularly good grasp of emotions expressed through facial expressions and body language," says Eilert.

A classic example of how things go wrong, he says, is when parents argue and the child asks why. "Instead of giving an honest answer, parents often say, 'We're not arguing, we're just having a discussion,'" says Eilert. So children come away confused at being told that the right interpretation they had made is wrong.

The third reason is the high value accorded to language by society. "As our language skills improve, we forget that we are actually non-verbal beings. As toddlers, humans are very much fixed on body language. That passes and they start trusting words more," Eilert says.

So the next time you meet with a friend or have a rendezvous with your partner, it's well worth leaving your cell phone in your pocket and looking the other person attentively in the face.

We make a lot of decisions every day. Some are difficult, others we don't even notice, and all of them influence us. Ever heard of nudging? (13.12.2019)

One-night-stands and affairs happen in all kinds of relationships. Some people say that's a sign of the failure of monogamy. Here's why sexual fidelity is hard to stick to — and why it still makes sense. (29.06.2018)