Reactor escapes damage after explosion at Fukushima nuclear plant | World| Breaking news and perspectives from around the globe | DW | 12.03.2011

Japan confirmed there was an explosion at one of its nuclear plants on Saturday following a major earthquake. But the reactor itself appears undamaged, government officials said, and radiation levels have not risen. 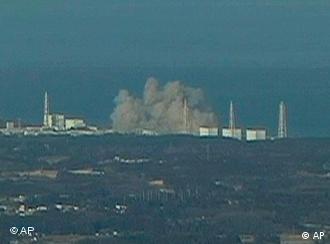 Japanese Chief Cabinet Secretary Yukio Edano confirmed on Saturday there was an explosion at the Tokyo Electric Power Co's (TEPCO) Fukushima Daiichi nuclear power plant that caused the roof of one of the plant's reactors to collapse.

Edano also said the explosion was caused by hydrogen gas and that radiation levels have not risen significantly in the area.

"At this point, there has been no major change to the level of radiation leakage outside [from before and after the explosion], so we'd like everyone to respond calmly," Edano said.

Energy officials in Japan rated Saturday's nuclear accident a 4 on the International Nuclear and Radiological Event Scale. The rating denotes a "nuclear accident with local consequences" on the scale, which goes from 0 to 7.

The 1979 Three-Mile Island accident in the United States was given a 5 rating, and the 1986 Chernoybl meltdown was given the worst rating of 7.

Officials also told the IAEA, the UN's atomic energy watchdog, that they were preparing to distribute iodine to inhabitants living near the reactor. Iodine helps protect the body from exposure to radioactive material.

Officials are now planning to fill the reactor at Fukushima with sea water to cool it down and reduce pressure in the unit. 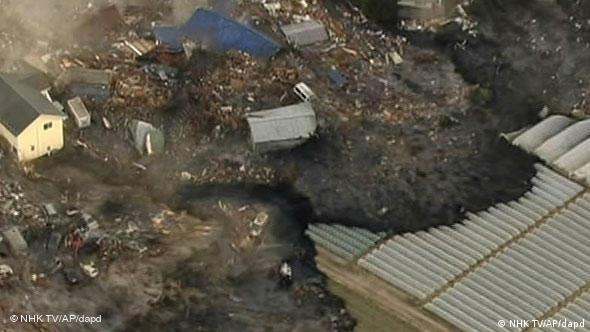 Whole houses were washed away by the tsunami

Edano said it would take about five to 10 hours to fill the reactor core with sea water and around 10 days to complete the process.

Several workers are believed to have been injured, while radiation levels near the plants have fallen after a spike following the explosion.

The Japanese government extended the evacuation radius around the quake-damaged Fukushima I and II power plants to 20 kilometers (12 miles), a news report said. The plants are located about 150 kilometers north of Tokyo.

Reactor cooling systems failed at the two plants after Friday's record 8.9-magnitude earthquake hit, unleashing a terrifying 10-meter (33-foot) high wave that tore through coastal towns and cities, destroying all in its path. 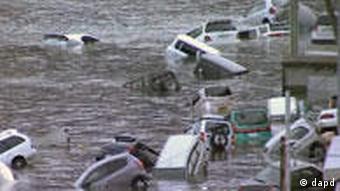 Over 700 people have already been confirmed dead in Japan

The estimated death toll rose from several hundred to more than 1,000 as the tsunami swallowed cars, homes, farms and boats. Thousands of people, including some 10,000 in the Miyagi prefecture, remain unaccounted for, according to Japanese public broadcaster NHK.

Japan's Prime Minister Naoto Kan said the quake and the tsunami that followed were an "unprecedented national disaster."

The epicenter was located about 130 kilometers east of the northeastern city of Sendai, on the main island of Honshu.

The earthquake also shook subway lines and buildings in Tokyo, Japan's capital and one of the most densely populated cities in the world.

A statement from leaders of the 27 European Union states meeting in Brussels expressed "condolences and support to the governments and people affected" and pledged support for quake-hit Japan. 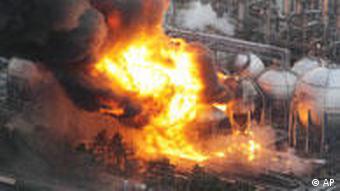 An oil refinery in Ichihara caught fire after the quake

"In addition to national responses, we have asked the High Representative [Catherine Ashton] and the [European] Commission to mobilize all appropriate assistance," the statement said.

"I would like to tell the Japanese people that Germany is standing by their side in this difficult hour," Chancellor Angela Merkel said. "Germany will help with the reconstruction efforts, not just in the coming days, but also in the long term."

"Our experts are in close contact with the disaster management in Japan, and, so far, Japan's national resources are fully engaged in the response," said Elisabeth Byrs, a spokeswoman for the UN Office for the Coordination of Humanitarian Affairs.

United States President Barack Obama said his country was monitoring the tsunami threat on US soil and "stands ready to help the Japanese people in this time of great trial. The friendship and alliance between our two nations is unshakable."

Japan is one of the world's most seismically active areas. The island nation accounts for 20 percent the world's earthquakes of magnitude 6 or greater.

Beyond Twitter traffic, many media organizations are live-blogging information as it comes in. Government agencies are also providing valuable information on their sites as well. (11.03.2011)

The earthquake that hit Japan on Friday has dealt a blow to the world's biggest reinsurance companies Munich Re, Swiss Re and Hannover Rück. It is still unclear how big the costs will be. (11.03.2011)

Japan is particularly vulnerable to earthquakes (11.03.2011)