While the Ukrainian leadership tries to implement the Minsk agreement, opposition to a re-integration of separatist-controlled areas is growing. Experts warn of a new internal political crisis. 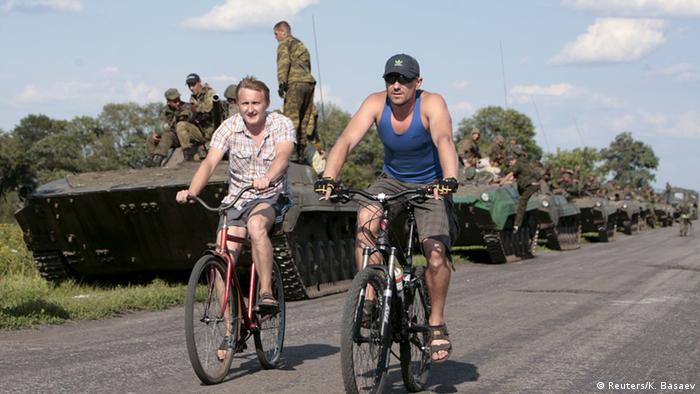 In October, the conflict in eastern Ukraine saw more signs of easing tensions than there'd been in a long time: both the Ukrainian army and pro-Russian separatists pulled back more tanks and heavy weapons from the dividing line. The separatists postponed local elections until 2016, while Ukraine presented a draft bill which is to make those elections possible. The Minsk agreement (Minsk II )is being implemented slowly, and not without setbacks. It stipulates that the Donetsk and Luhansk areas located in the Donbass coal-mining region should be granted more rights and eventually become Ukrainian territory again. 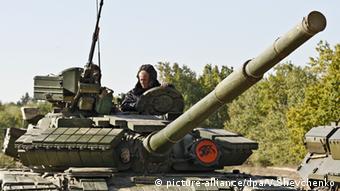 What appears to be the greatest challenge on that path to re-integration still lies ahead for Ukraine. In Minsk, Kyiv pledged to enshrine special rights for the separatist areas in its constitution before the end of 2015. The vote on the first reading at the end of August was overshadowed by heavy rioting in front of the Kyiv parliament. Four policemen died when a protester launched a grenade. Right-wing populist party "Svoboda" (Freedom) was one of the driving forces behind the protests. In parliament, the "Radical Party" under right-wing populist Oleh Lyashko tried to block the vote. After the ballot, Lyashko's party resigned from the coalition government. Observers predict that the vote on the second reading - scheduled for December - will see a similarly fraught situation.

As early as 12 February - the day when the Minsk agreement was signed - critical voices could be heard in Ukraine. They blamed Ukrainian president Petro Poroshenko for having been hoodwinked by Russian head of state Vladimir Putin. Serhy Rahmanin, deputy editor-in-chief of renowned weekly "Dzerkalo Tyzhnia," put it thus: the agreement facilitated the creation of pseudo-republics in eastern Ukraine that were hostile to Kyiv and had their own police forces and judicial systems, but were to be financed by the central government. He added that a comprehensive amnesty for separatists was questionable as well.

His colleague Serhiy Harmash, editor-in-chief of the online newspaper "OstroV," had similar views: "I'm against the Minsk agreement," the Donetsk-based journalist , who had fled from the separatists and escaped to Kyiv, told DW: "It imposes a conflict solution on Ukraine which could destroy the country in the end." The greatest danger was that the Russia-fueled conflict could spread from the level of foreign policy to that of domestic policy, he continued. Trying to re-integrate the separatist areas into Ukraine could "provoke a civil war," Harmash warned, and stated what he sees as the two possible ways out of the situation: Poroshenko either had to "let the people decide" and - in analogy to Greece and the EU's austerity demands - hold a referendum on the Minsk agreement, or he had to step down.

Anatoliy Hrytsenko even recommends canceling the Minsk agreement. "There are plenty of reasons to do this, because it wasn't adhered to for many months, the ceasefire being a prime example," the opposition politician, who formerly served as defense minister under pro-Western president Victor Yushchenko, told DW: "The Minsk agreement is not to be implemented under any circumstances, beause otherwise Ukraine will be in danger of ceasing to exist." Kyiv, he went on, had to restart negotiations on Donbass with Moscow, inviting the European Union as well as the United States to the negotiating table. And this time, he said, Russia-annexed Crimea could not be excluded, as had been the case in Minsk.

Majority does not believe in peace after Minsk 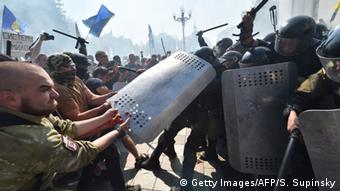 Oksana Syroyid, deputy speaker of Ukraine's parliament and member of the governing party "Samopomich" (Self Reliance), is considered to be the most influential and prominent critic of the Minsk agreement and its implementation under the constitution. "Samopomich" is a new, liberal, pro-Western party, with its stronghold in western Ukraine. In August, her parliamentary group voted against the constitutional reform. In local elections held on 25 October, "Samopomich" gained votes, establishing itself as the third-strongest political power across almost the entire country. In many interviews, Syroyid warns of a "virus of separatism" which could infect Ukraine via the Minsk agreement.

Critics such as the journalist Harmash or the politician Hrytsenko are by no means isolated voices, says Volodymyr Fesenko. Talking to DW, the Kyiv-based political scientist cited an open letter submitted to President Poroshenko in August by around 30 Ukrainian intellectuals, asking him not to enshrine a so-called "decentralization" in the constitution. "This is Putin's plan - legitimizing an Russian enclave on Ukrainian territory," the letter said. The plea, however, had no consequences.

"This reflects public sentiment," Fesenko said. The majority of Ukrainians (60.7 percent) do not believe that the implementation of the Minsk accord will lead to peace, according to a survey conducted by the Kyiv International Institute for Sociology (KMIS) at the end of September. Only one in four of those polled gave a different opinion. Another polling institute, the Kyiv-based Razumkov Centre, determined in its survey that there were more opponents than advocates of a constitutional reform in Ukraine (32 versus 21 percent).

Potential to stop the constitutional reform

The adversaries of the Minsk accord have neither a political leader nor a coordination center, but they have still the potential to stop the reform of the constitution, according to Fesenko. "At this point, the Ukrainian parliament cannot come up with the 300 votes required to adopt the constitutional reform on the second reading," the expert says. "If Minsk was implemented to the letter, this could lead to a serious political crisis," he warns, saying that some political parties were suspected of trying to provoke early parliamentary elections by this very means.