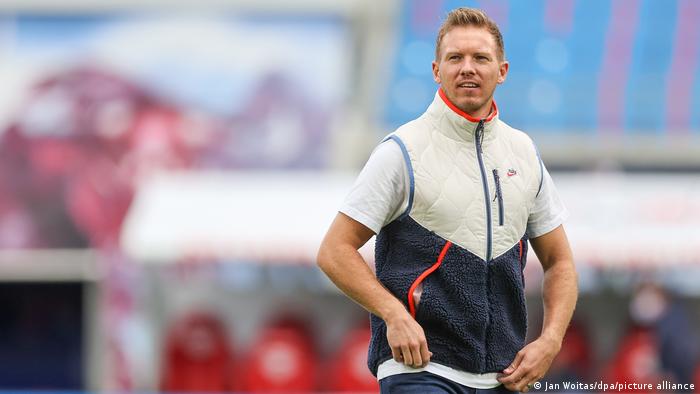 Breaking with tradition is something RB Leipzig know all about, having climbed up the German pyramid by controversial means since their foundation in 2009.

After coming from behind to beat Hertha Berlin 2-1 on Saturday, they sit at the pinnacle of that pyramid. Ahead of a first ever meeting with Manchester United in the Champions League on Wednesday, RB Leipzig are unbeaten in five and a point clear of both Bayern Munich and Borussia Dortmund.

They've done it by breaking with their own young "traditions" under Germany's youngest coach, Julian Nagelsmann.

When RB Leipzig first arrived in the Bundesliga in 2016, they threatened to take the league by storm with then sporting director Ralf Rangnick's high-energy brand of counterattacking football. But the sugar-rush was followed by something of a comedown when the added burden of European football took its toll.

Rangnick, the sporting brains behind RB's rise, is no longer at the club. Under his former Hoffenheim protégé Nagelsmann, RB are a more versatile team, capable of both classy counterattacks and dominant spells of possession.

Against Hertha, they enjoyed 68 percent of the ball, completing 85 percent of their 543 passes. These possession statistics were no outlier either. Similar numbers were to be found in wins over Augsburg, Schalke and Mainz this season, proof that this team has added extra strings to its bow.

In defense, the move to a back three — nominally of German internationals Lukas Klostermann and Marcel Halstenberg plus French international and Manchester United target Dayot Upamecano — affords RB greater numbers and control in midfield. 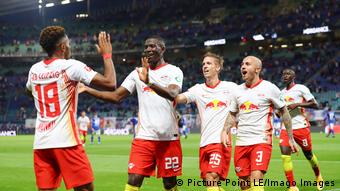 RB Leipzig is a team full of individual talent

Up front, the move away from purely counterattacking football has helped to compensate for the loss of talisman Timo Werner, while Manchester City loanee Angelino offers an offensive threat from full-back with four goals in all competitions so far this season. Dani Olmo, recruited from Dinamo Zagreb for €21 million ($24.9 million) in January, runs the creative department with four Bundesliga assists so far.

This combination of modern Gegenpressing and classic possession football was key in their journey to last season's Champions League semifinal, most notably in impressive wins over Tottenham Hotspur and Atletico Madrid. Rangnick's aggressive pressing football has not been completely abandoned though.

Away at Leverkusen this season, RB's toughest league fixture so far on paper, Nagelsmann reverted to a back four, settling for only 41 percent possession and a 1-1 draw. It would be a surprise if he didn't employ a similar system at Old Trafford, especially with Ole Gunnar Solskjaer's United showing themselves to be notoriously uncreative in possession.

Of course, Nagelsmann's tactical tinkering won't count for much if he doesn't manage to win anything. The closest RB have come to actually winning a trophy was a 3-0 defeat to Bayern Munich in the 2019 German Cup final. In the Bundesliga, they've finished 15, 31, 12 and 16 points behind the Bavarians.

In Germany, RB like to portray themselves as underdogs, the upstarts from downtrodden Saxony who rely on youth but face the same challenges as every other club when trying to compete with the omnipotent Bayern Munich at home, and Europe's top teams abroad. 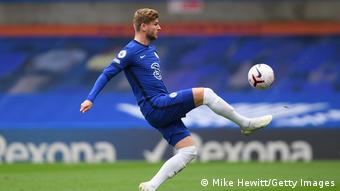 RB Leipzig have moved on quickly from Timo Werner

"In terms of names and budgets, there are two teams in our group who are ahead of us," Hungarian goalkeeper Peter Gulacsi told the club's internal media last week, referring to Manchester United and Paris Saint-Germain, after RB had started their Champions League campaign with a 2-0 win over Istanbul Basaksehir.

This is at odds with the fact the club has outspent the opposition at every level of the pyramid, has recorded a net spend of over €130 million since arriving in the Bundesliga, and continues to benefit from a unique system of farm teams not available to their rivals.

Furthermore, it was revealed earlier this year that Red Bull, which owns 99 percent of the club, had simply converted €100 million of liabilities into club equity back in April 2019 in a process known as a Debt Equity Swap. Without it, the club's debts would currently stand at €224 million.

Put simply, RB Leipzig are anything but underdogs and Julian Nagelsmann could not wish for more favorable conditions in which to prove his own qualities and build a trophy-winning side — both in Germany and in Europe.