A Paris auction house sold an original painting made for the 1936 Tintin comic book "The Blue Lotus." The small Herge artwork fetched more than €3 million. 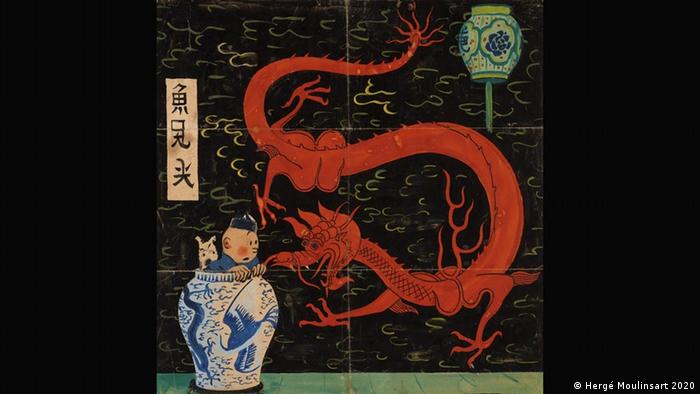 Jean-Paul Casterman was seven years old when he received a piece of paper with a drawing on it. The child folded the small watercolor of a youngster and his dog hiding from a dragon in a gigantic Chinese vase and put it in a drawer, where it languished for decades.

The man who gave little Jean-Paul the gift was none other than Georges Remi, better known as Herge. The boy's father, Louis Casterman, headed the publishing house that published the Belgian illustrator's world-famous comics about the adventures of a young reporter called Tintin and his dog, Snowy.

The drawing was an early version for the cover of the 1936 The Blue Lotus. The editor rejected it, arguing that the multi-colored drawing was too expensive to print.

Tintin and Snowy in China

Herge was a perfectionist and a visionary — and the 1936 volume of the Tintin series has a special place in Herge's artistic cosmos as it marks the illustrator's opening up to foreign cultures: in this case, to Chinese culture.

Herge studied the country's culture and history for The Blue Lotus to create a greater sense of realism, said Eric Leroy, a comics expert at the Artcurial auction house, based in Paris. "With stark colors, the eye contact between Tintin and the dragon captivates us," he told DW, adding that Tintin's faithful dog, Snowy, is also pictured. "Herge wanted us to feel the mysterious side of the story that is told in the framework of Chinese culture."

This work is an iconic comic image, "one of the most famous of the 20th century," says Leroy.

It is the second time Artcurial is auctioning a work from the Tintin universe. Herge's cover for the 1932 Tintin in America went under the hammer in 2012 for €1.2 million ($1.5 million) — a record sum for a francophone comic artist at the time. Just a few years later, in the summer of 2020, a few other Herge comic album covers achieved top prices.

Herge's widow has meanwhile said her husband by no means meant to give away that precious painting — and would like the work returned to her.

However, "the sellers are the rightful owners of the work. They are the heirs of Jean-Paul Casterman," Leroy says, adding that the widow's claims of ownership are mere assertions that have no legal basis.

Original works by comics and fantasy artists have long fetched high prices at auctions; covers for fantasy magazines by artists such as Frank Frazetta have recently sold for several million dollars. In 2019, a Frazetta cover painting depicting an Egyptian queen changed hands for $5.4 million at a Chicago auction. "Buyer interest depends on the quality of the pieces. The market is strong, especially for increasingly rare copies," says comics expert Leroy.

Such elaborate works rarely find their way into museums, however. "The true home of 'The Blue Lotus' is the Musee Herge," the museum's director, Nick Rodwell, told French paper Le Monde.  "But public collections can't keep up with those astronomical sums."

An original drawing from the first published "Tintin" story, signed by the artist, has been sold at auction in Dallas. The beloved Belgian comic series has been translated into more than 70 languages.