An original drawing from the first published "Tintin" story, signed by the artist, has been sold at auction in Dallas. The beloved Belgian comic series has been translated into more than 70 languages. 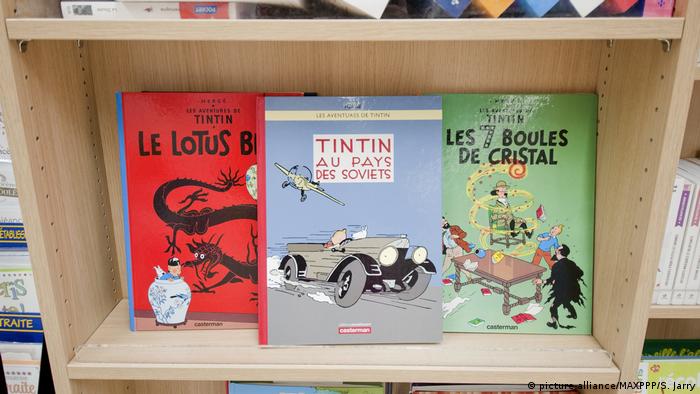 The drawing of the roving reporter and his dog first appeared as a supplementary illustration to Tintin in the Land of the Soviets in February 1930, and was the only one in a series of 24 comic stories by Belgian comic legend Herge to be published solely in black and white.

The drawing shows Tintin carving a tree trunk into a makeshift propeller for his plane, watched by Snowy who is covered in bandages.

The anti-communist tale, first printed in the Belgian Catholic weekly Le Vingtieme Siecle (The 20th Century), was long regarded as apart from the rest of the stories in the series, with some people questioning whether the young Tintin character was yet fully developed.

The other stories that followed, such as Tintin in America and Blue Lotus, were initially also published in black and white, but were reissued in color starting in the 1940s. They depict a smart, teenage Tintin traveling the world with his white dog Snowy, getting to the bottom of all sorts of mysteries.

Tintin's creator, Georges Remi, under the nom de plume Herge, combined well-researched plots in stories which ranged from swashbuckling adventures to political thrillers and science fiction. The stories used slapstick humor, sophisticated satire and political and cultural commentary to hook a young audience and hold them well into their teenage years.

Most of the old Tintin cover illustrations are on display at the Herge museum in Louvain-la-Neuve, near the Belgian capital.

The identities of seller and buyer of the drawing sold in Saturday's auction have not been released. Other Tintin works have also attracted big spenders to auction, with some surpassing $1.5 million.

Belgian cartoonist George Rémi, known as Hergé, was the creator of the famous reporter Tintin. Reflecting on the 20th century, his work is both criticized and cult. A major retrospective shows why he was a pioneer. (27.09.2016)

A drawing from the Tintin adventure 'Explorers on the Moon' has sold for 1.55 million euros, an auction house has reported. The sale is a record for a single cartoon plate. (19.11.2016)