Radio station seeks to give refugees information and a voice | Europe | News and current affairs from around the continent | DW | 13.06.2016

Radio station seeks to give refugees information and a voice

Refugees seeking asylum say one of the things they want most is information. A radio station in a makeshift camp in Greece is hoping to give them that - along with a voice to the world, as Kristina Jovanovski reports. 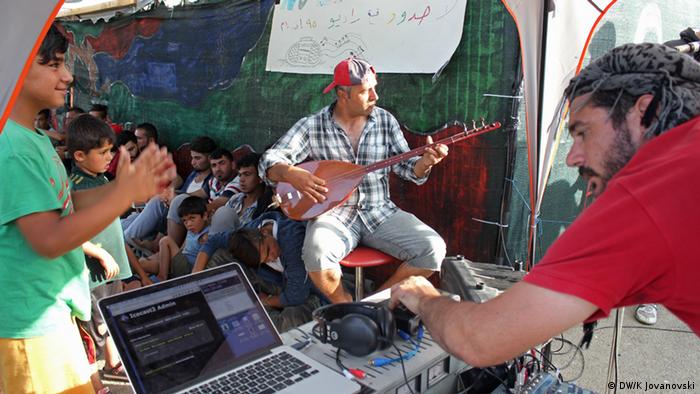 Syrian Seban Rashid plays a guitar-like Kurdish instrument live on the radio while a singer grabs a microphone and joins him as others line up with their selected songs on their phones to request.

These, however, are no partygoers – they are refugees near the Greek-Macedonian border at a makeshift camp at a gas station.

"It's just entertainment," Rashid says. "People are getting sad and feeling bad and for that reason I like to play."

The 35-year-old from Afrin, Syria, worked at a clothing factory when he had to flee with his wife to Turkey. They decided to come to Greece in March after they heard hundreds of people were allowed to pass daily into Macedonia on their way to western Europe.

"There is people [who] came before us, maybe five or six days before us. I heard that they are now somewhere in Europe."

There are many reasons for frustration here – long lines in the summer Greek heat for basic goods, little privacy among the tents just feet apart and sharing portable toilets with hundreds of people for months.

The camp sits next to a highway where children can come feet away from fast-moving trucks.

Many though say the worst part of all this is not knowing what will be next for them.

Italian activist Davide Agnolazza, 29, is hoping he can provide part of the solution by setting up a radio station streaming online and airing on FM radio live from the camp. "No Border Radio" airs interviews and music by refugees in Arabic, Kurdish, English and, as Agnolazza and his friends often host the daily shows, Italian. He also plans to provide information about the procedures refugees here have to go through, as long as the facts are confirmed. 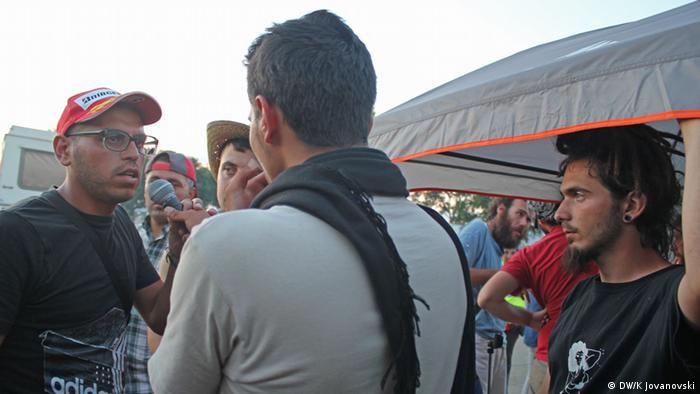 Agnolazza says the idea for the radio station came from the demonstrators who started one in Istanbul's Gezi Park during the 2013 protests. When Agnolazza saw the lack of information in the makeshift Idomeni camp on the Greek-Macedonian border, he thought it was time to start a station there.

But plans are hard to keep in such an unpredictable situation. While Agnolazza was in Italy getting donated equipment, Idomeni was evacuated, so he decided to bring the station to this nearby camp about 20 kilometers from the border with Macedonia.

Over 14,000 refugees and migrants used to live in Idomeni where they hoped to cross the border into Macedonia en route to the west but the country closed the border in March.

Some ran to this makeshift camp instead. There is now a mix of hope that they can still cross the border and resignation that they will have to register for asylum at an official camp.

However, there is mass confusion about how to do so. Greece created a system for people to call using Skype for appointments to start the process, but refugees say it is near impossible to get anyone on the line.

Michele Telaro, a field coordinator with Doctors Without Borders, said the system Greece set up using Skype could have worked earlier, when there was fewer people, but with the current amount, the system could not handle so many people.

"If you do not precisely inform people … that there is a place with these services, with these facilities, in these locations and there you can access this, this and this service, if you cannot inform them - they will never move."

Without proper official information, many rely on each other for news. During the Idomeni evacuations, refugees said they got phone messages from those who got on the buses saying the camps they were taken to were in bad condition.

Doctors Without Borders said authorities did not tell refugees and migrants where they were heading when they got on the buses, leading to frustration and fear. 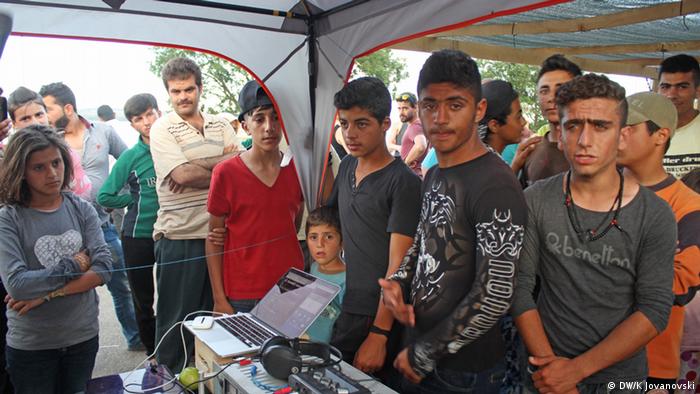 That sense of powerless is something Agnolazza is trying to combat with his radio station. He is handing over the microphone to refugees so they can interview each other and let them choose what music they want.

"What we are trying to do is build stuff that can work without us because they aren't children," Agnolazza says. "It's very humiliating I think for a human being to just wait [for] someone else to give him water, to give him food… they are not under detention."

But the unpredictability of the situation is an obstacle once again for the station. Most refugees are certain this camp is next to be evacuated, considering how close it is to Idomeni, meaning Angolazza will take it back with him to Italy or try to look for a new home for the station in Greece.

As for Rashid, the Syrian living at the camp, he is also confused about where he and his family can find a home.

"We are staying here for three months … we [need] more good information for relocation to find a real solution for us."