After clearing Idomeni, Greek police are now evacuating other unofficial camps. Yet refugees are still trying to illegally cross Macedonia to reach the EU, even setting records in doing so. 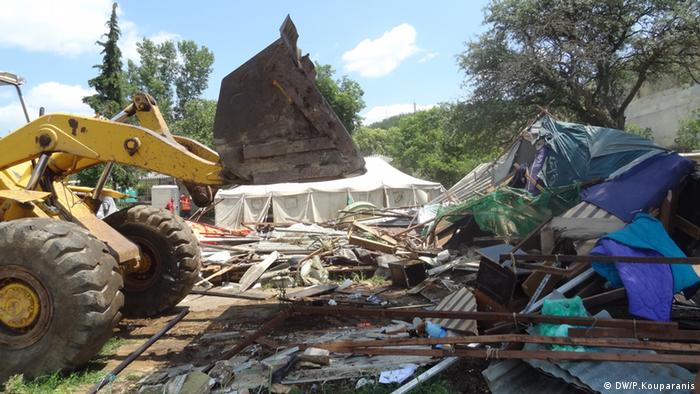 First the people left. Then the excavators came and removed all evidence of the former inhabitants' lives. For months, around 50 Syrian Yazidis lived on the grounds of the BP gas station near the Greek-Macedonian border, not far from Idomeni. They had tried to make it as homey as they could. They had built tents, set up places to sit and sleep and prepared meals together. Aid organizations provided them with the essentials. 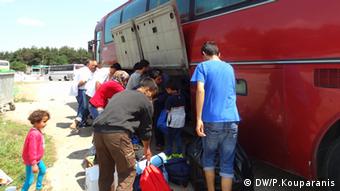 On Thursday morning, they left everything behind. Taking their basic necessities with them, they got on a bus that took them to the official refugee camp, Diavata, near Thessaloniki. The informal camp was not fit for humans, especially not for women and children, said Idris, who acts as the speaker of the group. That is why they accepted the authorities' offer to move to an official camp.

For six days, buses have been coming to the BP gas station and across the street to the Hotel Hara premises. People who have been camping out here for months are taken to official reception centers. Until now, the police press office has estimated that a total of 500 men, women and children have been moved. Authorities were surprised when they were told that 100 refugees of the original group of over 800 people there were still living on the BP grounds, with another 200 still residing nearby on the hotel premises. They reply weakly by stating that the numbers "change dynamically," as people are constantly coming and going. The government's official goal is to shut down all informal camps, including the camp at the EKO gas station, 20 kilometers away.

Many find this hard to believe. Everyday life for the 1,500 people at the camp is well organized with the help of aid organizations and international volunteers. Food, medical care and hygiene are probably not any worse than in the government-run reception centers. Even school lessons are taught at the camp. Spanish volunteers teach the children in English in the morning and the adults in the afternoon. The calm deceives. Ultimately, everyone will leave the camp one day - at the latest when the police show up in large numbers. They do not use force, says a German aid worker at the Hotel Hara. As the premises have been locked up, supply deliveries and care are delayed on some days. That is the reason why families in particular are willing to be moved. When the first ones go, others start following.

But they do not all leave, at least not people from the Maghreb states, Afghanistan or Pakistan. They all barely have a chance of obtaining asylum in the EU. "So where should we go?" asks Mohamed, who comes from Lahore. In the official reception centers, they face the threat of deportation. With nearly 30 other people, Mohamed lives near the border in an empty two-story building that was once a pension. No one seems to have a plan for the future.

The flight to Europe continues

For Esat, it is quite different. He wants to go to Western Europe, come what may. Only two and half weeks ago, he crossed the Aegean to reach the Greek island of Chios. After that, he traveled to Piraeus and from there he drove to the Greek-Macedonian border and ended up at the BP gas station. This is where he met four young men from Algeria who share the same goal. Monday night they crossed the border. Just before they made it to the other side, the Macedonian policed apprehended them. They were taken to the border fence and forced to return to Greek territory.

"That is not permitted," he was told. "It is illegal." However, this experience has not discouraged him. He and the others plan to cross the border again on one of the coming nights. This time, however, a taxi will be waiting. For 400 euros per person, it will take them to the Macedonian-Serbian border. Apparently, it is easier to reach the EU – especially Hungary - from Serbia.

Caught at least 16 times and sent back

Those with enough money can be taken to the EU directly. Smugglers charge between 900 and 1,200 euros for the trip starting at the Greek border. Halid, a trained roofer, did not want to spend that much money until now. In recent weeks, he made five attempts to cross the Greek-Macedonian border and was caught every time. But he didn't break any records. Another Syrian holds the record for attempted crossings: he made it into Macedonia at least sixteen times but was caught every time and sent back to Greece. These are not isolated cases. Greek police have confirmed that at least one person every day is kept from crossing the border to Macedonia.

Yet the illegal attempts at escape continue. Halid will also keep trying. He wants to go to Spain, where many of his relatives live, as does a young woman he would like to marry. That is why he will pay the smugglers this time. Does he really believe he will make it to Spain? "Of course," he answers without the least bit of hesitation.