Radiation limits on Japanese food under fire | Europe| News and current affairs from around the continent | DW | 31.03.2011

The European Union has introduced more frequent checks on food from certain regions in Japan, but some experts say the radiation limits don't protect human health. 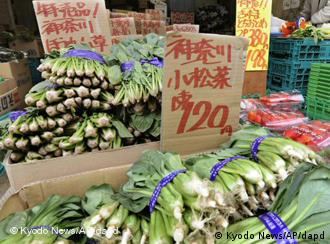 Leafy vegetables are prone to high levels of radiation

The European Union has introduced more rigorous checks on food coming from areas of Japan where production could be affected by the Fukushima disaster. But some experts have criticized the EU for not going far enough in limiting radiation levels in food.

"It annoys me that the limits don't correspond to what's healthy. It shouldn't be allowed," Sebastian Pflugbeil, President of the German Society for Radiation Protection, told Deutsche Welle.

The EU has set limits for radioactive elements contained in Japanese food, such as iodine-131, cesium-134 and cesium-137. For dairy products, 500 becquerels per kilogram (bq/kg) of iodine is allowed and 1000 bq/kg of cesium. For all other foodstuffs, the levels rise to 2000 bq/kg of iodine and 1250 bq/kg of cesium.

All food and animal feed coming from 12 prefectures around Fukushima will have to be tested for radiation before it leaves Japan, and 10 percent of this food will be tested again once it arrives in the EU.

Pflugbeil maintains that the levels set by the EU are not safe enough. 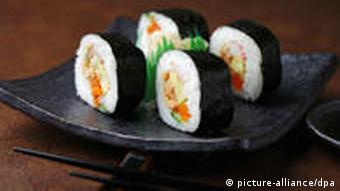 Most sushi fish is not imported from Japan

"If you eat this food over a long period of time, you exceed the limits and you would get problems from the radiation doses that are released. It's a very sorry situation," Pflugbeil said.

According to Pflugbeil, humans can safely consume one millisievert of radiation per year. This amounts to eating an average of just four to six becquerels per kilogram in all food, he said – much lower than safety limits set by the EU.

"So you can see that just a few becquerels is enough to mean the population is not protected from radiation," Pflugbeil said.

"The regulation doesn't refer to human health, otherwise you wouldn't be able to do it."

"If you look at the regulation which entered into force on the weekend, we are asking a lot from the Japanese," Vincent told Deutsche Welle. He added that many companies were not able to resume exports because of earthquake and tsunami damage to the local infrastructure.

Vincent is concerned that checks on Japanese food don't precipitate a food scare.

"We are talking about levels which would mean you would have to consume for a full year food which could be contaminated, and then you may be facing a problem," Vincent said. 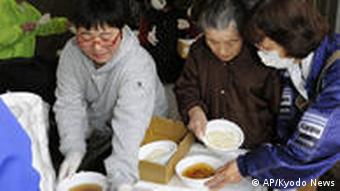 The Japanese government has introduced radiation limits on food too

Although the levels of radioactivity permitted in food were laid down in 1987, shortly after the Chernobyl disaster, Vincent says that the standards have been revised since then and are still safe.

"The levels are OK, from a safety point of view," Vincent said.

"The EU imports very little food from Japan", he added.

Imports of Japanese agricultural and fishery products to the EU were worth 205 million euro in 2010. Food makes up just one percent of Japanese exports, according to the World Bank.

Vincent said that, as yet, no food from Japan had been discovered which exceeded EU radiation limits.

German scientists say vegetables that grow aboveground near the Fukushima nuclear reactor are most suceptible to radiation. However, root vegetables and seafood are less likely to be affected. (26.03.2011)

Growing concerns over radiation cause several countries to ban or impose restrictions on the import of Japanese products, with Hong Kong, one of Japan's key food export markets, becoming the first. (24.03.2011)

People in Tokyo are rushing to buy up bottled water, after being briefly warned that tap water might be unsafe for children. This could hamper earthquake relief efforts in areas where water pipelines have been damaged. (24.03.2011)