KFC Germany and Berlin police denied accusations of racism after an online video showed police removing a group of black tourists from a Berlin store. Employees claimed the group was "disruptive," but the guests deny it. 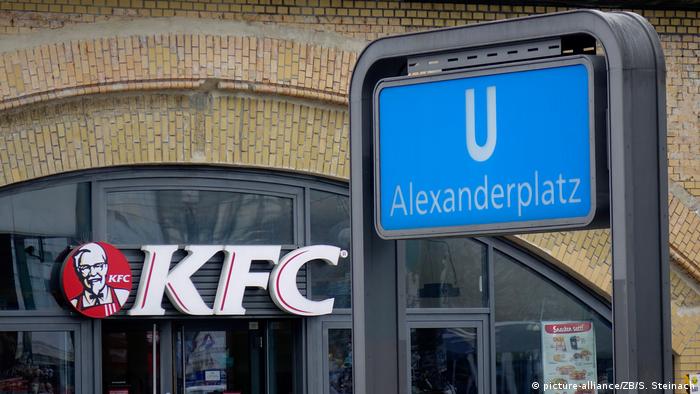 A police intervention sparked a debate on racism in Germany, after several black British nationals were escorted out a KFC restaurant in Berlin in an incident captured in an online video.

According to German media reports, the three women and four men have Granadian and Trinidadian background, but hold UK citizenship.

The video, posted by one of the tourists, shows police officers arguing with the group in English over their KFC table. "You have to go right now," says one of the officers, adding they were called by the store's manager.

Soon after that, the group starts heading towards the exit. A policeman then tells the woman filming to delete her video, but she refuses. "No, you can't tell me to delete it from my phone, it's my phone," she says.

Once outside, the police tell them they were escorted out for being "too loud" and for throwing food around. They deny it and accuse the police of being "one-sided" and racist.

The video, first published on Monday, has been viewed over 260,000 times by Thursday.

On Thursday, Berlin police confirmed they received a call about a group of "disruptive" diners in a KFC-venue in downtown Berlin. The officers arrived at the scene and talked with a KFC employee, who complained that group of guests was throwing food around and badgering the staff, as well as refusing to leave.

"The officers determinedly reject the accusations of racism," she said.

Also, the guests continued to film the officers and published the recording despite being warned that this act was illegal in Germany. Therefore, police filed "complaints" over the incident.

Manager tried to 'resolve the situation'

KFC Germany also stood by its actions, saying that the group was behaving "inappropriately."

The fast-food company said the local manager tried to discuss the issue several times before calling the police.

"After futile attempts to resolve the situation, he believed he was forced to contact the police in order to ensure protection of the staff and guests," the group said in a statement cited by the Die Welt newspaper.

However, group member Kelon Pierre gave Die Welt a different account. He once again denied he and his friends were throwing food, but confirmed there was an altercation with the manager who asked them to be quiet.

"Other guests around us also talked and laughed," he told the German paper. "That is why I wanted to know: Why are you only talking to us?"

"We were the only black people in the restaurant and the only ones who were asked to be quieter," he said, according to a German-language quote.

He described the police response as an "overreaction."

Many observers linked the incident with the recent Starbucks case in the US, when the police were called to escort two black men from a store in Philadelphia. The incident, also caught on video, sparked accusations of racism that forces Starbucks managers to apologize and briefly close around 8,000 of its stores for racial-sensitivity training.