The Rabaa camp dispersal was deemed a crime against humanity equal to the Tiananmen Square riots. Hundreds of Islamist protesters were killed by Egyptian forces on August 14, 2013. Kristen McTighe reports from Cairo. 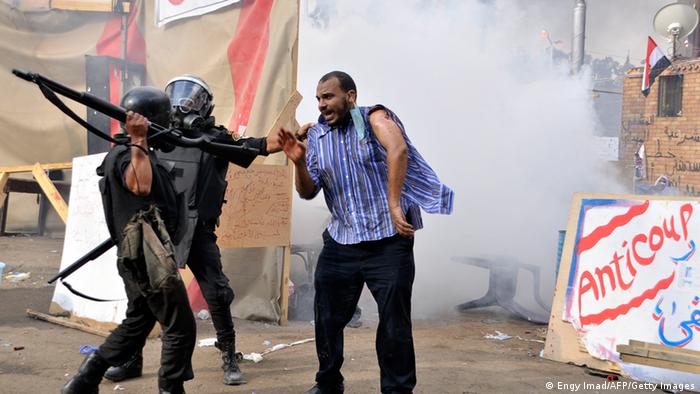 In the summer of 2013, tens of thousands of supporters and members of the Muslim Brotherhood held open-ended sit-ins to demand the reinstatement of the country's first democratically elected president Mohamed Morsi, an Islamist who was ousted in a military coup led by now President Abdel-Fattah el-Sissi, after mass protests against his rule.

After failed talks to end the protest camp, security forces raided the Rabaa al-Adaweya camp in the early morning of August 14, 2013. Survivors and witnesses say there was no warning. Two years on, human rights activists say government officials and security forces have still not been held to account.

"It was the darkest day in Egyptian modern history, a very dark day for the whole world," said Sara Behairy, a US-based activist who participated in the sit-in in Nahda Square, though was not there the day of the dispersal. "Thousands of people who were peaceful were shot, they were killed, bodies were burned, thousands were arrested," she told DW.

Behairy and others who witnessed or survived the dispersal founded the Rabaa Story Foundation, a group documenting the events and campaigning for justice internationally.

One video recently uploaded to their Facebook page, which has garnered more than 200,000 likes, shows what purports to be security forces firing on a makeshift hospital. Intense gunfire, shouts and screams are heard as doctors and injured inside a makeshift hospital scramble to take cover and others drag bloodied corpses out of the line of fire.

Another video shows an adolescent girl crying over her teenage brother's body, which wrapped in a shroud inside a makeshift hospital. "My brother is here, my brother is here, Hozaifa, my love," she cries as she points to the body lying on the ground. 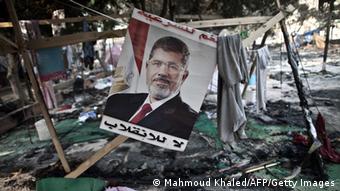 The coup against Morsi still reverberates

According to the Egyptian Health Ministry, 595 civilians and 43 police officers were killed on August 14, and at least 3,994 injured. After a year-long investigation into the events, which concluded that the government had likely committed crimes against humanity, Human Rights Watch documented 817 deaths in Rabaa Square, but said the actual death toll was likely higher than 1,000, noting many protesters were still missing.

Government officials, however, called the camp a hotbed for terrorism, and said violent and sectarian rhetoric was used by Islamist protesters, rhetoric that was documented in protester videos that went viral. Opponents of Islamists also said sectarian rhetoric incited a wave of attacks on churches that rocked the country following the dispersal.

The government also claimed that the use of force came in response to violent protesters and that security forces came under fire. But with only eight police officers killed according to Egypt's official Forensic Medical Authority and the country's Interior Minister Mohamed Ibrahim announcing that his forces found 15 guns in the square, rights groups said the lopsided death count suggests the majority of protesters were unarmed.

"There has been no accountability for the Rabaa massacre or any of the killings in the months after Sissi took power, no accountability whatsoever for any of the police or high officials that ordered or planned the clearing," said Joe Stork, deputy director of Human Rights Watch's Middle East and North Africa division. "On the contrary, there's been a sort of celebration of the police," he told DW.

The Square has recently officially been renamed Hisham Barakat Square, after the slain public prosecutor assassinated at the end of June. Barakat had referred thousands of Islamists and government critics to court and was seen as a leader of the crackdown on the Muslim Brotherhood. 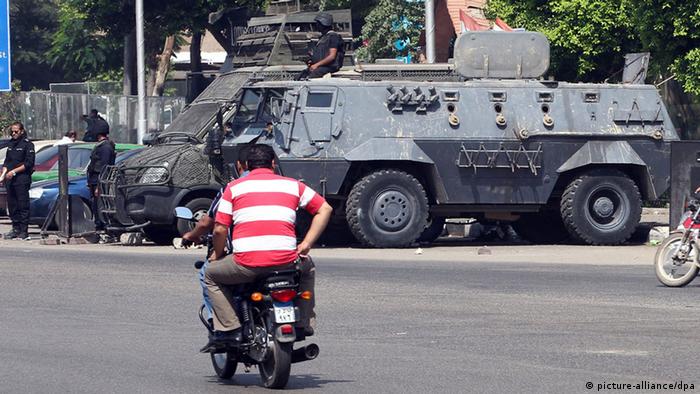 Jerome Drevon, a researcher at the university of Manchester and specialist in Islamist movements and militant groups, said the dispersal of the pro-Morsi sit-in was the "Tiananmen moment of the opposition to the Egyptian military," and pushed Islamists toward violence. "By taking their gloves off, the security forces and Sissi's regime sent a signal that they were coming back with a vengeance," said Drevon.

With the top brass of the Brotherhood swiftly rounded up and jailed, Drevon said that the coup and the dispersal of the camp affected the Islamist opposition's internal structure by eroding its organizational control over members and sympathizers.

"Being forced in to the underground or put in jail, Islamist mainstream leaders lost their ability to convince their supporters to maintain their non-violent opposition to the military authorities," said Drevon.

Since the dispersal of Rabaa, the crackdown on the Brotherhood has seen the group branded a terrorist organization following a series of militant attacks claimed by Sinai-based militants. Thousands of Islamists have also been arrested, hundreds sentenced to death in mass trials widely condemned as unfair, and allegations of forced disappearances and extrajudicial killings of Islamists have spiked.

The intensified repression, Drevon said, has pushed Islamists away from "the choice to engage in non-violent resistance, considering its cost and the absence of clear prospects of non-violent demonstrations."

"Even those Islamist leaders who firmly believe that violence only helps the regime have found it difficult to be heard on the ground," he said.

More than 600 police and troops have been killed in militant violence since Morsi's ouster. At the same time, experts say that militant groups have specifically used the Rabaa dispersal to lure disaffected youth.

"The Rabaa massacre is central to every recruitment effort by jihadist groups. Many videos by Ansar Bayt al-Maqdis and others include footage from there or very obvious references to the events," said Mokhtar Awad, an analyst at the Center for American Progress, referring to the Sinai-based militant group that pledged allegiance to the Islamic State and this week claimed responsibility for the beheading of a Croatian oil worker. "It is central to the narrative."

Awad gave the recent example of Jund al-Islam, a smaller militant group in Egypt aligned with al Qaeda, which posted its first videos this summer after two years of inactivity.

"To prove relevance they included footage of Rabaa and other events," said Awad, adding that the footage included no commentary. "It is understood they are communicating that they care about this and wish to position themselves as champions of the Islamists' cause and to young Islamists as an option to link up with to exact their retribution."

"For Brotherhood youth and previously non-militant youth, Rabaa was the true trigger for their radicalization, it was not just the coup," he said.

US vows to support Afghan forces against Taliban

India: 9 killed as boulders fall from hilltop in landslide