Underground with the Muslim Brotherhood | Middle East | News and analysis of events in the Arab world | DW | 02.07.2015

Two years ago, the Muslim Brotherhood was driven underground, after President Mohammed Morsi was deposed. Tensions between the Brotherhood and the regime now seem to be escalating. Naomi Conrad reports from Cairo. 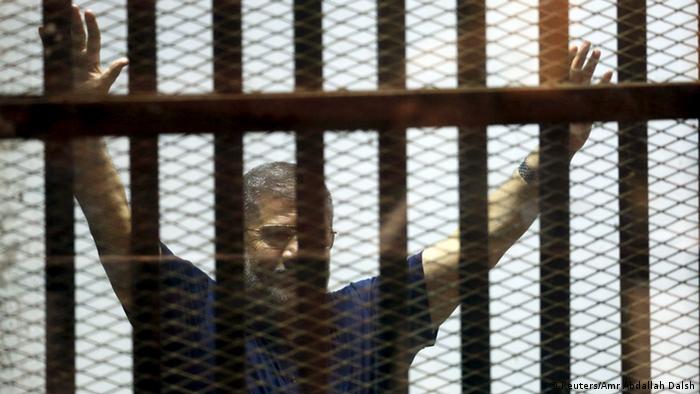 As the taxi driver meanders through the late-afternoon traffic in Cairo, he gestures to a mosque beside the road. The entrance is cordoned off with barbed wire, guarded by several soldiers, lounging next to a big army tank. The cabbie shrugs. The mosque, he says, has been closed ever since "that day."

It was here, on the busy road leading to one of Cairo's more affluent neighborhoods that protesters gathered in early July of 2013 to demonstrate against the toppling of former president and member of the Muslim Brotherhood, Mohammed Morsi [pictured above in custody]. This followed weeks of mass protests against his rule, which many saw as increasingly undemocratic and authoritarian. Six weeks later, security forces moved into the camp at Rabaa, killing hundreds of protesters.

Sitting in an apartment full of brocade furniture and dusty chandeliers not far from Rabaa, Aisha grimaces as she recalls that day. The eloquent 32-year old mother of three, modestly dressed in a loose white hijab and grey tunic, says it was "the hardest day of my life." "Suddenly, it started to rain bullets." She said she saw hundreds die, including many of her friends.

The Muslim Brotherhood was founded some eight decades ago as a means to increase the role of Islam within society. Banned, but tolerated under Hosni Mubarak, it ran a network of charitable institutions and came to political prominence and brief legality after the revolution that ousted the former army officer in 2011. 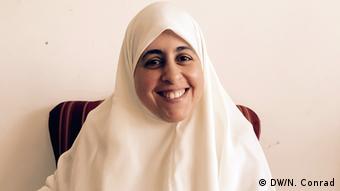 Aisha: Most of the Muslim Brotherhood leaders are in prison or have fled the country

Aisha says she is not a member of the Muslim Brotherhood, but her father definitely is: Khairat el-Shater was one of the leading figures within the Muslim Brotherhood and its chief financier. He ran for president in 2012 until he was banned from seeking political office by the electoral commission.

Today, the family assets are frozen and her father languishes in jail, sentenced to death along with Morsi and hundreds of other members of the Muslim Brotherhood, which the government has designated a terrorist organization.

But Aisha is worried that things might even get worse, following the assassination of Hisham Barakat, Egypt's chief prosecutor and the architect of the country's crackdown on the Muslim Brotherhood and the opposition, who was assassinated on June 29.

It's become the rule in Egypt that anything bad that happens "is blindly blamed on the Muslim Brotherhood," Aisha says, "and if you really think about it, all the leaders are in prison." Those who aren't, have fled: Many of the Brotherhood's leadership escaped to Istanbul.

And so it's up to young women and men like Shams, to continue the work of the brotherhood in Egypt. The young 22 year old, with a ready smile and fashionable jeans, agreed to meet DW in a flat somewhere in Cairo on condition of absolute anonymity. Anything else he says might prove too dangerous. If anyone found out that he was a member, he'd be arrested, like so many of his friends, he warned. 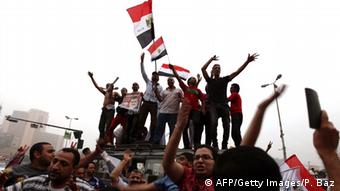 He joined the Muslim Brotherhood in 2011 he says, because he was attracted to its religious ideals. At first, his neighborhood cell, some seven or eight men, would gather in the local mosque to discuss religion, culture, or Syrian politics. But today, following what he calls the military coup, they meet in secret, sneaking into a member's flat one by one – and conversation evolves around Egyptian politics. Once, sometimes twice a week, Shams receives a call, summoning him to a "special dinner" – his cell's code for a protest to challenge the regime.

Eventually, the reasoning goes, the security and political situation will deteriorate to such an extent, that the regime might collapse. He grins: The Muslim Brotherhood, he says, needs new leaders, people, who take on a more active leadership and lead the fight against the regime, which, he says - almost as an afterthought - has to remain peaceful.

Osama Morsi: 'I can't guarantee anything'

That's not a given though: On the veranda of the café of one of Cairo's most expensive neighborhoods I meet Osama, the son of ousted president Morsi. Osama, a lawyer who works as an international legal consultant, chose this location for our meeting. Seeing him at his house would have been too dangerous, he says. A group of bored-looking upper class Egyptian youths sitting close by sip their coffee and stare at their smartphones. Osama shakes his head: Osama, smartly dressed in a shirt and flashy silver watch, believes in the rule of law and non-violence and keeps on emphasizing the need for "democratic and constitutional law." His father, he says, remains the rightful president, removed from power by "elements of the Mubarak regime," who staged a "coup." He denies accusations that his father's regime was seen by many as increasingly "undemocratic."

His father, like so many other leaders, is being held in solitary confinement at an unknown location. As the group of bored-looking Egyptians gets up to leave, Osama leans forward: People, he says, referring not only to the Muslim Brotherhood, but to people more generally: "We broke the barrier of fear on the January 25 Revolution. If you break it once, you can always break it again."

In Egypt today, it seems, the scene is set for further confrontation: Just days after Barakat's death, special forces killed several Muslim Brotherhood members in a raid in Cairo. Egypt, one journalist told DW, "is in for a hot summer."

Heba Farouk Mahfouz in Cairo contributed to this report

The attacks in Sinai were claimed by Sinai Province, an Egyptian militant group that has pledged allegiance to the "Islamic State" group. Kristen McTighe reports from Cairo on its growing influence in the region. (02.07.2015)

'No time to say good-bye'

A reporter for a Spanish newspaper has fled Egypt before his "imminent arrest." In an interview with DW's Naomi Conrad, he tells his story, stressing that this may be the start of a crackdown on foreign journalists. (30.06.2015)

Egypt's top prosecutor has died after a bomb attack. Hisham Barakat and his bodyguards had been taken to hospital after their car was hit outside a military academy in the Heliopolis neighborhood of the Egyptian capital. (29.06.2015)

Can India and Israel help drive cooperation in the Middle East?