Plenty of people in Berlin have an opinion about the Israeli-Palestinian conflict - and these differing views could come to a head on Quds Day protests. Supporters of each side face off in street demonstrations. 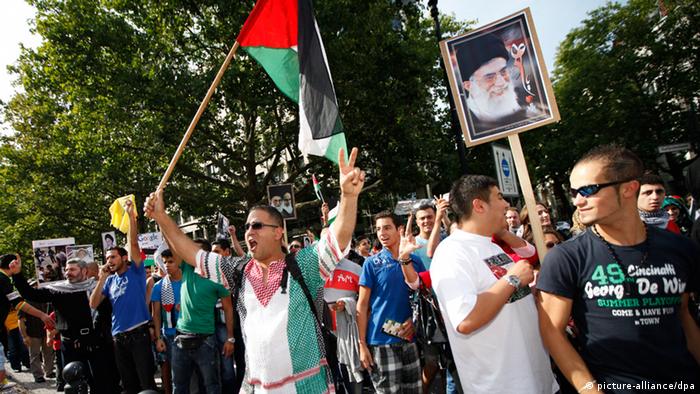 Two groups of protesters - one rallying against what they call the Israeli occupation of Jerusalem and the other looking to put an end to what they regard as an anti-Israeli march - will stand opposite each other and yell slogans across the police barrier in Berlin on Friday (25.07.2014). That is a likely scenario for the start of Quds Day, an annual event calling for protest of Israel's occupation of Jerusalem.

Michael Spaney, a spokesperson for the "Stop the Bomb" campaign, which along with Jewish and other organizations has called for people to take to the streets in demonstrations to counter the Quds Day protests, said a violent confrontation could not be ruled out, adding, "The atmosphere is certainly tense."

Quds Day is an Iranian export: Ayatollah Khomeini first called for it in 1979 to mobilize Muslims worldwide in support of Palestinians and against Israel. Al-Quds is the Arabic name for Jerusalem, and the event always falls on the final Friday during Ramadan.

In Iran, it's an official holiday marked by mass rallies. In Germany, participation in the event had seen declining numbers over the years. But the ongoing Israeli-Palestinian conflict is expected to provide new momentum. Police say that 1,500 demonstrators are expected, with at least 400 counterdemonstrators - a significant increase from years past.

The police also intend to "significantly increase" their presence, according to Berlin police spokesperson Stephan Redlich.

Berlin police announced their intention to strictly enforce restrictions among the protesters, including forbidding slogans that incite violence or the burning of flags or effigies.

In past years, Qud Day was a peaceful rally. But since 2000, every year's protest has seen clashes and aggression. Recently, however, demonstrations against Israel's offensive in Gaza have included anti-Semitic slurs, and even attacks against Jews.

Jürgen Grassmann of "Al Quds AG" - the protest's umbrella organization - played down the mention of anti-Semitic slurs and attacks. "We are absolutely peaceful," he said. The "we" he refers to encompasses the loosely structured Al Quds working group, which registers the protest and maintains a website for the event. 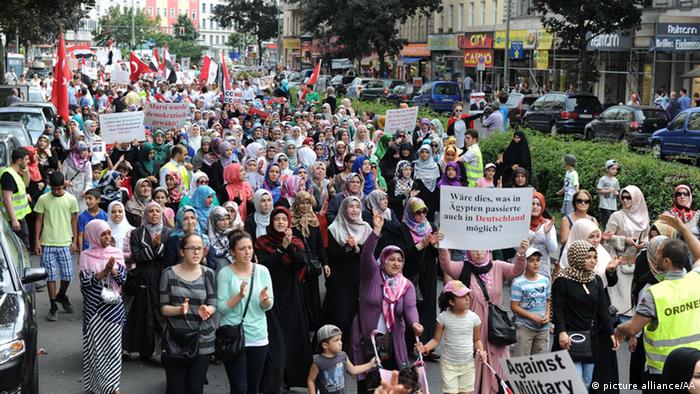 Any potential violence can be traced back to Islamist groups, Grassmann said. Although he's not happy about their participation, he can't forbid it either, he added. Grassmann said those shouting anti-Semitic slogans should be taken into police custody.

In a DW interview, Grassmann repeatedly emphasized that he is not anti-Semitic - he considers himself "anti-Zionist." He sees Germany's politics and media largely as "slaves of Israel."

German security circles define Grassmann as a German convert to Islam with a fundamental pro-Iran stance. His alleged former involvement with anti-Israeli and at times anti-Semitic elements initially caught the attention of German security services.

No direct links could be found between protest organizers and the Iranian regime. Grassmann said allegations that the group receives instructions from the Iranian regime were "pulled out of thin air." He said he has head up the Al-Quds group for several years.

Grassmann, however, described the group before his leadership as "very Iranian." German security circles confirmed that until 2005 Berlin's Quds Day demonstrations were registered by Bahman Berenjian, who was considered to have close ties to the Islamic Republic of Iran. 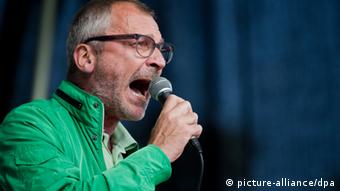 Critics of the Quds Day protests include Greens parliamentarian Volker Beck, who called it a "hate event." He described the day as a "campaign for the destruction of Israel" created by Iranian revolutionary leader Khomeini. "You can dress it up differently, but at its core it remains the same," Beck said.

Quds Day events will occur all over Germany - and the world. The German capital will see a number of potential shouting matches among for pro-Israeli and pro-Palestinian forces: three protests took place Thursday, and two more have been registered for Saturday.

UN humanitarian undersecretary Valerie Amos has demanded a halt to the violence in Gaza, saying "so many children" are among the more than 700 Palestinians killed. Israel says the toll among its troops has risen to 32. (24.07.2014)

US Secretary of State John Kerry says some progress has been made on a potential cease-fire between Israel and Hamas. The UN has meanwhile approved a probe into Israel's Gaza offensive. (23.07.2014)

Opinion: Images in Gaza are misleading

Israel is being heavily criticized for its offensive in Gaza. But the images of dead Palestinian civilians are deceptive. They are not victims of Israel, but of Hamas and its ruthless strategy, says Michael Wolffsohn. (23.07.2014)

Israel-Gaza: Hour of the extremists?