Gerhard Schröder, who works for oil giants Gazprom and Rosneft, has been pressed to disavow the war in Ukraine. His silence has caused some of his staff to quit in protest and business partners are distancing themselves. 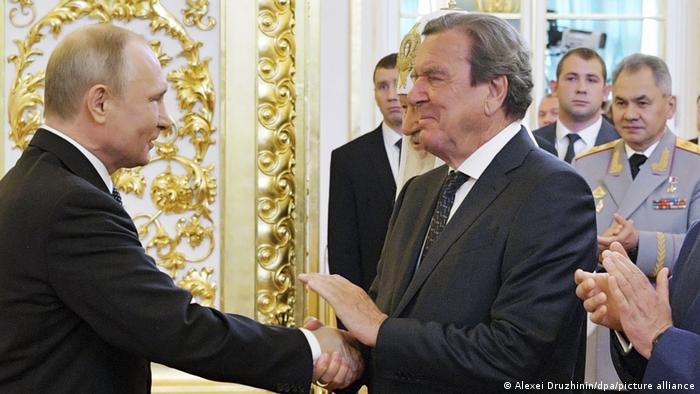 Former German Chancellor Gerhard Schröder found himself on Tuesday increasingly pressed to distance himself from his close relationships to Russian businesses and leaders following Thursday's invasion of Ukraine.

A member of the center-left Social Democrats (SPD), Schröder was the head of Germany's government from 1998 to 2005. Since leaving office, he has parlayed friendships with Moscow's elite, including President Vladimir Putin, into high-profile jobs at Russian oil giants like Gazprom and Rosneft.

He was also on the board of Nord Stream 2 AG, a pipeline project that would have brought Russian gas into Germany but was blocked last week by Chancellor Olaf Scholz, a Social Democrat.

In the past week, calls have been mounting for Schröder to disavow Putin and the war in Ukraine. On Tuesday, all four of his staff members in Germany's parliament, the Bundestag, quit, reportedly over his refusal to do so.

The news of his staff's quitting was followed by several other companies and partners dropping their projects with Schröder.

His former spokesman, Bela Anda, said the pair were stopping their regular podcast.

Soccer team Borussia Dortmund, of which Schröder is a lifelong fan and honorary member, told German daily Bild that, were the chancellor to hold on to his posts, Dortmund could "not accept this and would make a decision accordingly."

Germany's football association, the DFB, has echoed Dortmund's statements, as Schröder is an honorary board member.

Caretaker DFB presidents Rainer Koch and Joachim Watzke, who is also Borussia Dortmund's CEO, issued a joint statement calling on Schröder to publicly distance himself from Russia in time for the organization's general assembly on March 11.

"The clear stance of the DFB must also be represented by its leading representatives and its honorary members. We also expect such a stance from Gerhard Schröder," the DFB statement said. "We very much hope that our honorary member Gerhard Schröder shares this stance and gives up his positions in state-owned Russian companies, or, in the event that he is not prepared to do this, that he gives up his honorary DFB membership."

Though his dealings are well documented, the SPD has in the past been hesitant to criticize its former leader or call for his removal from the party. However, this week Chancellor Olaf Scholz distanced himself from Schröder, saying he "does not speak for the government."

Schröder's roles were "damaging Germany's reputation," the co-leader of the SPD, Saskia Esken, said over the weekend.