Putin calls for unity with the West under Trump administration | Europe| News and current affairs from around the continent | DW | 01.12.2016

The Russian president warned of "world catastrophe" if the two sides do not work together. His annual address blamed Russia's economic woes on domestic issues rather than international sanctions. 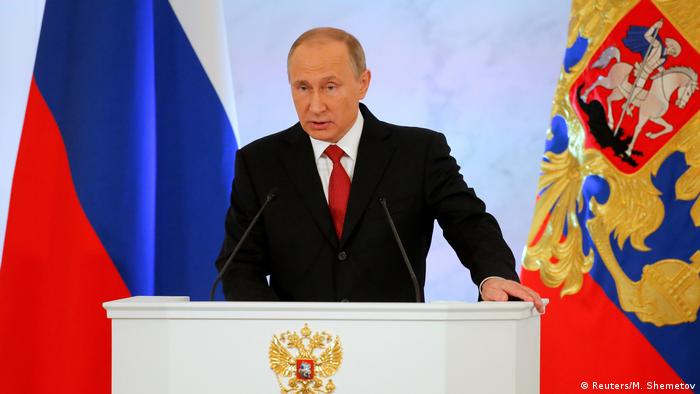 Russian President Vladimir Putin said he wants to cooperate with the incoming US administration and combine efforts against terrorism at his unusually diplomatic annual state-of-the-nation address in the Kremlin on Thursday.

He has often used the live broadcast speech to attack the west and the United States, but he kept a conciliatory tone in this year's talk, saying Russia would work with other countries to tackle global challenges if its interests are respected.

"Attempts to break the strategic parity are extremely dangerous and can lead to a world catastrophe," Putin told the gathering of Russia's political elite.

"We don't want confrontation with anyone. We don't need it. We are not seeking and have never sought enemies. We need friends.

"We are ready to cooperate with the new U.S. administration. We have a shared responsibility to ensure international security."

Relations with the US have recently sunk to a post-Cold War low over Russia's annexation of Ukraine and its military support of President Bashar al-Assad in Syria. Washington also accused Russia of interfering in the US elections by spreading misinformation and hacking American political sites and email accounts. 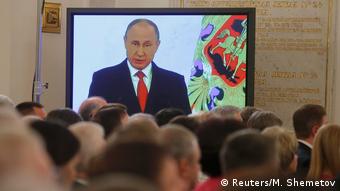 Putin denied those claims, but he echoed his previous statements that US President-elect Donald Trump may help restore relations.

"In the last few years we have faced attempts of foreign pressure with all tools involved - from the myths about Russian aggression, (allegations) of meddling in elections to the hounding of our athletes," Putin said, referring to recent doping scandals.

"It's important to normalize and develop our bilateral ties on an equal and mutually beneficial basis. We share responsibility for ensuring global security and stability and strengthening the non-proliferation regime."

He said he hoped to work with the new administration in confronting international terrorism. "Our servicemen in Syria are fulfilling that task," he said.

Sanctions not to blame for crisis

His talk was mainly focused on domestic affairs and its continuing financial crisis following the collapse of the ruble in 2014.

He said economic problems stemmed from domestic issues instead of western sanctions related to its activities in Ukraine.

"The main reasons for the economic slowdown lie primarily in our internal problems."

But he said the worst was behind them, noting that inflation should slow to 6 percent this year, down from 13 percent. He said agricultural exports will top US $16 billion (15 billion euros) this year, exceeding weapons exports.

Putin referenced Russia's upcoming anniversary of the 1917 revolution to call for national unity.

"It's inadmissible to bring divisions, malice, resentment and bitterness of the past into our life today," he said.

Trump and Putin: A match made in heaven?

"If Trump and Putin grow closer it could lead to things being possible in Ukraine or Syria that were hitherto impossible," Matthias Platzeck, chairman of the German-Russian Forum, tells DW. (20.11.2016)