Pussy Riot is back in high heels to tackle corruption

Punk activist Nadezhda Tolokonnikova is back in a new Pussy Riot video - her style may have changed, but the resistance continues. The song "Chaika" targets Russia's prosecutor general. 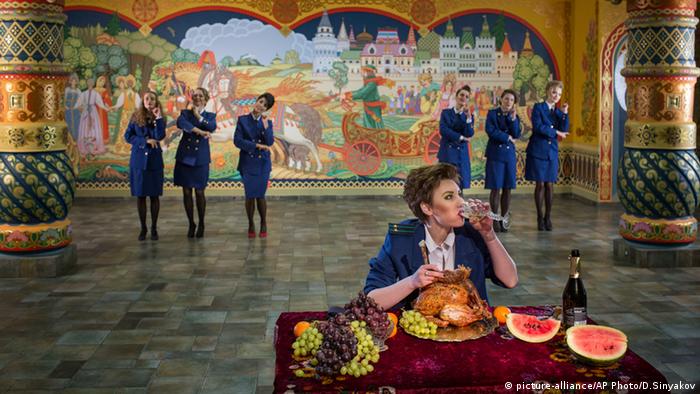 We all remember Pussy Riot as colorful, feminist punks - wild slam-dancing women wearing ski masks, tights and simple dresses in clashing hues. It might, then, come as a surprise that the leader of the famous band of activists, Nadezhda Tolokonnikova, now appears in a video released on Wednesday (03.02.3016) wearing a sexy police uniform and red high heels, lasciviously acting like a Russian Lady Gaga.

Despite the sexy moves, the lyrics of her rap song actually address a current political issue of the protest movement in Russia: the corruption scandal surrounding the clan of the Russian Prosecutor General Yuri Chaika.

Last December, the Russian blogger Alexei Navalny released a video detailing allegations of unlawful schemes undertaken by Chaika's sons, Oleg and Igor. It claims that they used their father's position of power and dubious connections to build a huge business empire, which includes salt mines in Russia and luxury hotels in Greece.

The film created a sensation in Russia. There's now a gesture used by protestors which refers to Chaika: Hands crossed over the breast, imitating a bird, refer to the fact that "Chaika" means "seagull." The term is now synonymous with corruption, too. Political activist Nadezhda Tolokonnikova uses this symbolic move in her latest video clip as well.

"Russia is not 'Gay-Ropa' - we can clarify our problems on our own," raps Tolokonnikova while lazing on the table of the state prosecutor in front of portrait of Putin, targeting Russia's anti-European media propaganda.

The video was deliberately shot in the aesthetics of the Russian pop style currently enjoyed by the masses throughout the country. According to the Pussy Riot leader, only "a silent minority" will really understand her YouTube campaign. Within the first 24 hours after being posted online, the clip was already viewed over half a million times. Although most YouTube commentators agree that the punk activist is addressing an important issue, many are disappointed by the music and aesthetics she chose for her comeback.

Promoting peace at the Berlinale 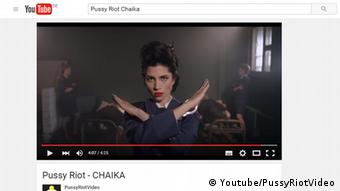 This is not just a regular rap move

Two members of band Pussy Riot will soon be coming to Germany: as human rights activists and critics of the Russian authorities, Nadezhda Tolokonnikova and Maria Alyokhina were selected to be members of the jury for the event Cinema for Peace, which takes place in Berlin during the Berlinale film festival.

Along with the Chinese artist and filmmaker Ai Weiwei, who'll head the jury, they'll decide on the most valuable humanitarian film of the year, which will be honored in their presence at a charity gala in Berlin.

The two Russian dissidents were already invited to the Berlinale in 2014. In March 2016, Nadezhda Tolokonnikova offered a special performance at the European literature festival Lit.Cologne in Cologne, where she read excerpts from her new book "Anleitung für eine Revolution" (Instructions for a Revolution).

Prison sentence after protests against Putin

In early 2012, the then 26-year-old Tolokonnikova was arrested, along with two other members of Pussy Riot. They had held a "Punk Prayer" in a church and directly criticized Russian President Putin. They were convicted of "hooliganism motivated by religious hatred" and sentenced to two years of imprisonment, but were released after Putin's amnesty in 2013.

Nadya Tolokonnikova, a member of Russian punk protest band Pussy Riot, has been arrested in a sit-down demo over prison conditions. Her detention came as President Vladimir Putin praised Russia's democracy and openness. (12.06.2015)

The Kremlin announced a prison amnesty on the 70th anniversary of the World War II Allied victory. But weeks later most remain locked up. Human rights activists call the amnesty a farce. Mareike Aden reports from Moscow. (12.06.2015)

The destruction of historic statues and works of art by offended religious believers in Russia has sparked outrage. But as Fiona Clark argues, the release of the offenders is most offensive. (06.09.2015)

Russian intelligence services have made the headlines recently: The FSB embarrassed itself in the Navalny poisoning case and the SVR is suspected to be behind cyberattacks in the US. Will heads roll now?

The jailed Russian opposition leader has appeared in public for the first time since ending a three-week hunger strike. His team has meanwhile said it is shutting regional offices amid a clampdown.