French lawyers, notaries and bailiffs have demonstrated in Paris against new reforms to reduce barriers to enter their highly regulated professions. Proposals to extend Sunday opening hours have also been rebuked. 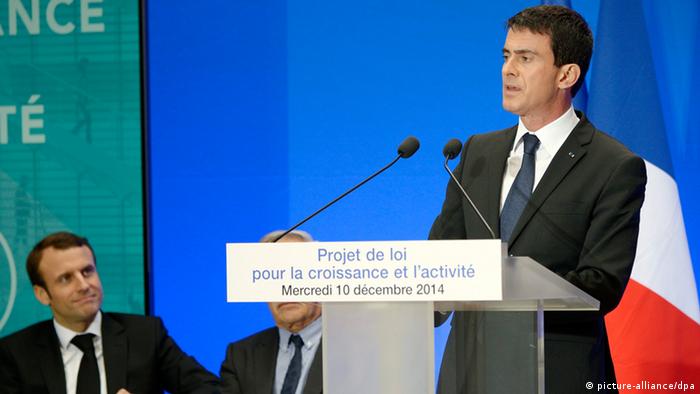 Plans unveiled by French Prime Minister Manuel Valls to increase the number of businesses open on Sundays and opening up regulated sectors to competition were met with demonstrations in Paris on Wednesday.

The measures were just a number of reforms announced by Valls earlier in the day which aim to boost France's ailing economy and reduce the record high unemployment of 10.4 percent.

As part of the Macron bill, presented as "Law on Growth and Activity" plan, barriers to enter highly regulated professions from notaries to bailiffs will also be slackened. The bill aims to stimulate competition, leading to cheaper services in areas where these groups currently have virtual monopolies.

In protest, French lawyers, notaries and bailiffs demonstrated in Paris, where they also tucked copies of the French Civil Code into a frieze depicting the 1792 "The Battle of Valmy" (September 20, 1792) on the Republic statue.

Currently French retail outlets can apply to local authorities to open on five Sundays per year. The Macron bill intends to extend that to 12.

Shops located in "international tourist zones" would also be allowed to open until midnight and on Sundays year-round.

In a recent interview, Valls said: "Do we want millions and millions of tourists - notably Chinese - who come to the capital to leave us and go and do their shopping in London on a Sunday?"

Speaking on Wednesday, Valls acknowledged the resistance to the plans outlined by the ruling Socialist Party, adding that the planned reforms were "more popular with the French voters than with some in public life".

"Everyone has to accept that we have to change things that aren't working, things that drag down the economy and therefore jobs, even if that shakes up habits, vested interests or corporatism," Valls told reporters.

France's downward-spiraling economy has become a matter of concern in Europe, due to its public deficit, which is expected to be above the three percent ceiling until 2017, as well as its sluggish growth of 0.3 percent in the third quarter, after two consecutive periods of zero growth.

In a live broadcast last month, Hollande also vowed to not stand for re-election in 2017 if he fails to live up to his pledge to bring down unemployment.

High debt, zero growth and weak support at home - France's leaders have their work cut out for them trying to implement much-needed reforms. DW takes a look at the state of the eurozone's second-largest economy. (13.10.2014)

If the atmosphere between Paris and Berlin is as bad as the tone of their dialogue, the EU has a problem, comments Barbara Wesel. (08.12.2014)