In a live broadcast, French President Francois Hollande has addressed his mistakes in a bid to hold on to voters over the remaining two-and-a-half years of his term. He also said he wants Paris to hold the 2024 Olympics. 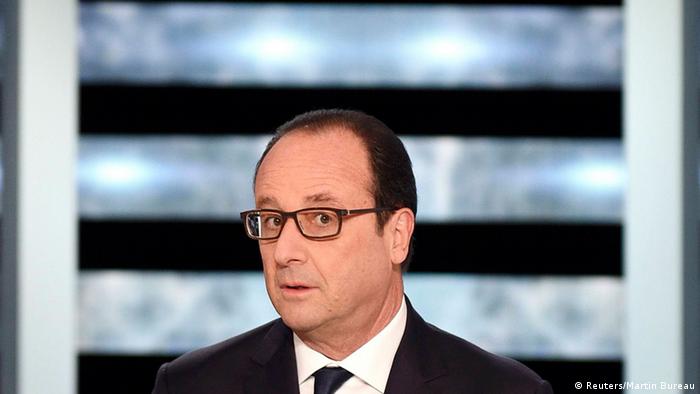 French President Francois Hollande appeared to be on the defensive on Thursday as he addressed the country on television channel TF1 and radio station RTL. The program, "En direct avec les Francais" (roughly "Face-to-face with the French people") was organized to take place precisely half-way through his five-year term.

Hollande used the prime-time interview to announce not only that France is a candidate for the 2025 world Expo, but that he was also in favor of the capital, Paris, bidding for the 2024 Olympic Games.

With his approval rating at a historic low of 13 percent, Hollande also acknowledged his mistakes, particularly regarding unemployment, but said that he had developed a "thick skin."

In a bold move, Hollande said that he would not stand again for the French presidency in 2017 if he failed to live up to his pledge to bring down unemployment. So far during Hollande's tenure, joblessness figures have risen in 27 of his 30 months in office.

"I talked about reversing the trend in unemployment. It did not come. I got criticized because it was a hope for many, especially those who were seeking employment," Hollande said.

"Do you think I can say to the French people, 'I didn't manage it for five years, but I promise I'll do it in the next five?' It doesn't work like that," said Hollande."The French people would be merciless and they would be right."

Hollande vowed, however, to go "to the end to reform France ... to make it stronger in the two-and-a-half years I have left." He also sought to assure voters that these changes would not require the levying of any new taxes in 2015; Hollande's recent "Responsibility Pact" aims to provide tax breaks for struggling French businesses, but to fund them by cutting some 50 billion euros in public spending.

In his 90-minute broadcast, the unpopular president went on to promise results from the investigation into the death of 21-year-old Remi Fraisse - a young environmentalist who was killed in student clashes with police in October - "within eight days."

"I have promised the family the truth, his father and his mother," said Hollande. "I'm the head of state and I am responsible for the appeasement," he added.

As well as economic stagnation, Hollande has also faced personal pressures during his presidency, not least his break-up with his partner Valerie Trierweiler after a magazine uncovered that he was having an affair. This August, Hollande's government resigned amid internal disputes on economic policies.

This, coupled with the ongoing infighting for the leadership of France's main center-right party, has helped the far-right Front National (FN) gain major traction at May's European elections.

A recent poll suggested that as it stands, Hollande would finish a distant third in the first round of a French presidential election, behind FM leader Marine Le Pen. Her father, former party leader Jean-Marie Le Pen, was able to win a spot in the presidential runoff vote back in 2002. Hollande warned on Thursday: "What has happened before can happen again."

As more than eight in 10 French people currently say they do not want Hollande to run for a second term, the center-right French newspaper "Le Figaro" said Thursday's broadcast was the "program that will save the president. Or not," adding that the 90-minute show was "all or nothing" for the embattled head of state.

France has launched an investigation into unidentified drones spotted over several of its nuclear plants. The incident has reignited the debate about nuclear safety. (30.10.2014)