Demonstrators in France have clashed violently with police in the wake of the killing of a 21-year-old environmental activist last week. Remi Fraisse's death was the first during a protest in mainland France since 1986. 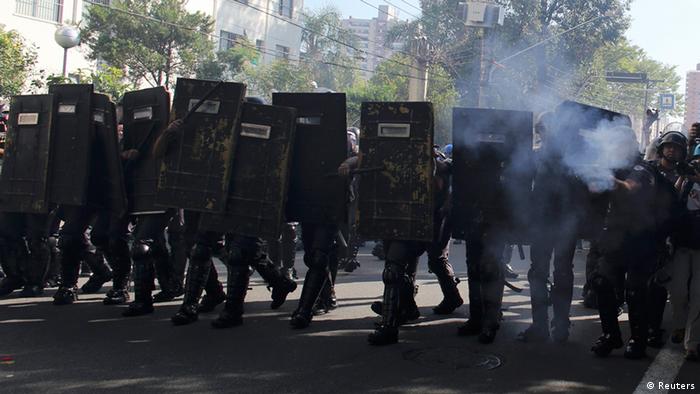 Police use rubber bullets and tear gas to disperse crowds that had gathered to protest the killing of 21-year-old environmental activist Remi Fraisse, who was killed last Sunday during a clash with police at the site of a controversial dam project in southwestern France.

Early investigations have suggested that Fraisse may have been killed by a police stun grenade.

"This is a young man who was killed by the police, by the state, and we can not let this go," said Annaik, a 23-year-old demonstrator. Other protesters shouted insults at police, calling them "pigs" and "murderers."

Additional protests were held in the French cities of Lille, Bordeaux and Avignon.

French President Francois Hollande has called for an investigation into Fraisse's death. Prime Minister Manuel Valls condemned Saturday's violence, calling it an "insult to the memory" of Fraisse.

Officials have decided to suspend work on the controversial dam project in the southern French town of Lisle-sur-Tarn in the wake of Fraisse's death. The dam was intended to help create an artificial lake in order to irrigate lands for local farmers.

Opponents of the dam contend its construction would destroy biodiversity and only benefit a few farmers.

Thierry Carcenac, a town executive, said it would be "impossible" in light of the tragedy to "continue work on the site."