Protesters tear down US flag at Cairo embassy

Washington has confirmed that a group of protesters scaled the wall of the US embassy in Cairo and tore down the American flag. The incursion came in response to a film deemed by some to be offensive to Islam. 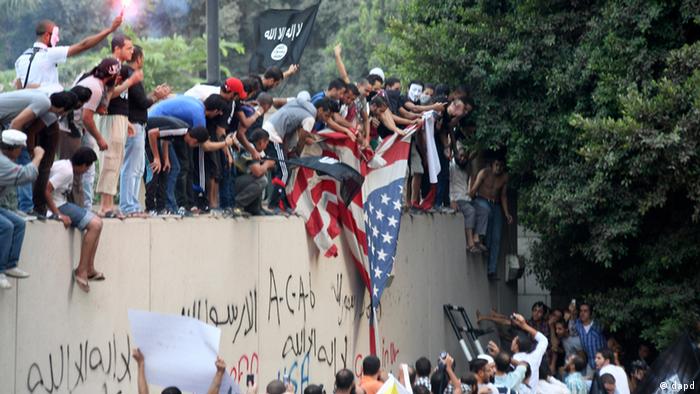 Several protesters climbed up onto the walls of the embassy and ripped down the US flag, raising another flag in its place.

Security reinforcements were rushed to the area and removed the trespassers.

"We had some people breach the wall, take the flag down and replace it," State Department spokeswoman Victoria Nuland said. "What I heard was that it was replaced with a plain black flag. But I maybe not be correct in that," she said, amid speculation that the flag that had been raised carried the emblem of a jihadist organization.

Reports also suggested the flag was inscribed with the Muslim profession of faith: "There is no God but God and Mohammed is the prophet of God."

Several hundred demonstrators had already gathered outside the embassy to protest at a film produced by Egyptian Coptic Christians living in the US, which the protesters claim defames Islam's Prophet Muhammad.

It was reported that the protesters tried unsuccessfully to set the flag alight before pulling it down.

Members of the crowd were reported to include members of Islamist groups and "ultra" football fans.

"We are obviously working with Egyptian security to try to restore order at the embassy, and to work with them to try to get the situation under control," Nuland told journalists.

Referring to the incursion into the embassy grounds, Nuland said: "It sounds like, and I don't have full details, that this came up pretty quickly."

The US had earlier issued a statement regarding the film. It condemned "the continuing efforts by misguided individuals to hurt the religious feelings of Muslims, as we condemn efforts to offend believers of all religions."

Egypt's Coptic Orthodox church also condemned the actions of some Copts living abroad who it said financed "the production of a film insulting Prophet Muhammad," an Egyptian state website reported.