Protest Against Plan to Repatriate Kosovars | Europe | News and current affairs from around the continent | DW | 19.05.2005

Protest Against Plan to Repatriate Kosovars

Germany has begun repatriating Kosovo refugees who fled their country during unrest in 1999. Human rights organizations and Green party politicians are protesting the move, saying it's coming too early. 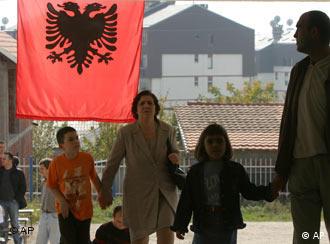 Some say it's still too early to send Kosovar minorities back

Beginning Thursday, planes will take off from Düsseldorf airport destined for Pristina, Kosovo. On board will be around 200 refugees Germany is repatriating to the war-torn country they left in 1999.

The refugees, who are members of the Roma (Gypsy) minority, are the first of several waves of Kosovars Germany will send back, after granting them temproary political asylum in the last six years. In the coming months, German wants to repatriate up to 51,500 Kosovars, including 34,500 Roma.

The United Nations, which administers the Kosovo province, has agreed to let Germany send home around 10,500 and has promised to guarantee their safety.

But that hasn't soothed the nerves of opponents of the move, like the Green party's leader, Claudia Roth. In an interview with the Berliner Zeitung, she said it was still too early to repatriate the refugees.

"The situation in Kosovo is still tense. In such a fragile situation the forced return of members of minorities is inexcusable," Roth said. 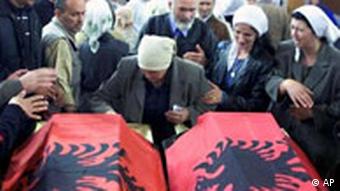 The government initially planned on shipping out the refugees last March, but scuttled the plans after violence between Kosovo Albanians and other minority groups left more than 30 dead. The UN Refugee Agency (UNHCR) warned in March that ethnic minorities still faced danger in Kosovo. There are 17,000 NATO soldiers currently keeping the peace in Kosovo, which remains unstable since former Prime Minister Ramush Haradinaj was forced to turn himself into the War Crimes Tribunal in The Hague on March 4, 2005.

Around 38,000 members of Kosovo's ethnic minorities and 16,000 Kosovo Albanians live in Germany. But the fact that many of the refugees being forced to return are Roma has stirred strong emotions in Germany, where a great number of Roma were killed by the Nazis.

Returning Roma will face discrimination and poverty like many ethnic minorities in the Kosovo province, say human rights organizations. Though they have only rarely been granted German residency, many have lived in the country for up to a decade and speak the language.

The country's human rights commissioner has promised that each case will be evaluated separately.

"When there is doubt we need to select the most secure way for the affected because we don't want any new victims," Tom Koenigs told reporters.

Roth and others don't think that's enough. The Green party politician said Roma needed to be granted work permits and a right to live in Germany.

"They need a future here, not a life in tent cities," Roth said in the interview.

Five years ago, United Nations troops marched into Kosovo, ending the last of the Balkan wars in the 1990s. Though democratic progress has been made, recent violence has shown the peace is tenuous. (June 10, 2004)

Ambitious plans are afoot in central and eastern Europe to integrate Gypsies, or Sinti and Roma -- one of the continent's largest ethnic minorities -- into mainstream society within a decade. (Feb. 2, 2005)

German Defense Minister Peter Struck is on a two-day visit to meet German troops stationed in the Balkans. Germany increased troop numbers there recently as part of a European Union effort to maintain a fragile peace. (March 21, 2005)