A tiny fishing village in Mexico used to be the center of the country's sea turtle slaughter industry. Now, it's become an ecotourism haven - thanks to a different kind of turtle power. 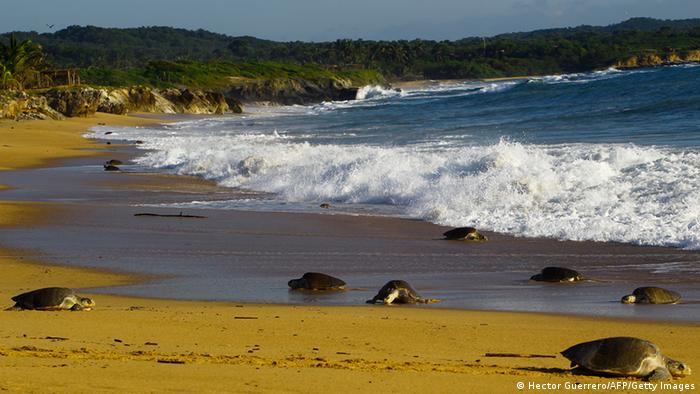 A bicycle-wheel sized sea turtle trudges out of the turbulent ocean and slowly makes her way up the beach. She finds the perfect spot and begins digging. Using her back flippers as little shovels, she scoops up the sand and flicks it away, the moonlight reflecting off her shiny shell.

"Now she is putting about 100 eggs in the ground," says our tour guide Juan Ochoa, who brings tourists to this beach a few times a week. "Sometimes they don't dig far enough or too close to the surface, and they lose their babies to birds or dogs." 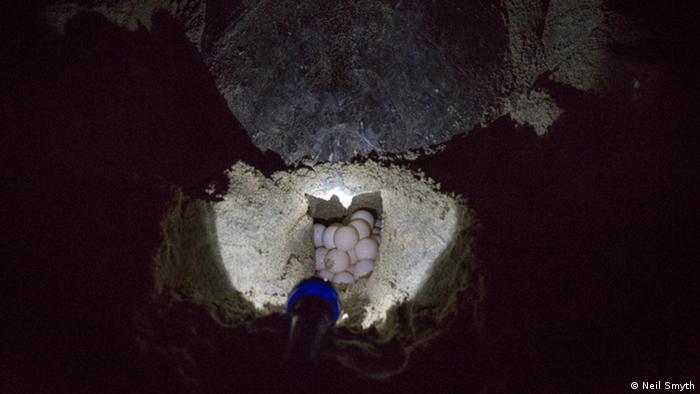 The turtles dig a nest in the ground using their back flippers, lay around 100 eggs, cover them up and then head back to the ocean

Slick white eggs resembling ping pong balls drop down into the nest - a sight that's both amazing and alien. When she's done, the sea turtle covers up her eggs and disappears back into the surf. In about 45 days, the baby sea turtles will emerge out of the sand and make their way into the ocean, too.

Each breeding season, thousands of turtles appear on Playa Escobilla - a protected beach far south along Mexico's Pacific coast, about 700 kilometers from the Guatemalan border - to take part in the same nesting ritual.

But just 20 years ago, this scene would have been very different. Then, the area was the center of the country's turtle-hunting industry, and the #link:http://wwf.panda.org/what_we_do/endangered_species/marine_turtles/olive_ridley_turtle/ :olive ridley sea turtles# that land on the beach were slaughtered in the thousands each year. The turtles were hunted for their meat, leather and eggs - believed in Mexico to be an aphrodisiac.

By 1990, turtle nest numbers plummeted to lows of 60,000 per year - from an average of around 900,000 per year - after decades of exploitation. Alarmed, the Mexican government introduced a strict ban on the trade.

This marked an ecological victory - but it also devastated the nearby town of Mazunte, which was almost entirely dependent on the sea turtle industry for income. But in recent years, Mazunte has become a haven for ecotourism - thanks largely to various community initiatives and work by the Mexico City-based nongovernmental organization Ecosolar.

As a tourist on that beach - nearly deserted save for a few conservationists and some Mexican soldiers patrolling for poachers - it's difficult to imagine it was ever anything but an ecological paradise. The same goes for the town of Mazunte. 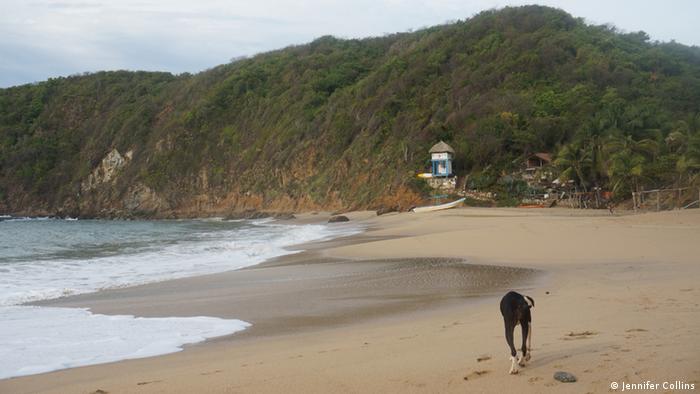 At the height of the turtle trade, the town had its own slaughterhouse. It's now pristine beach was unusable due to the smell, blood-tainted water and threat posed by sharks. But now, practically everyone in Mazunte makes money from ecotourism in some form.

Hostels and guesthouses are built in an ecologically friendly way using natural materials found in the region. Many women in the town work making and selling natural cosmetics in a cooperative, established in 1993 by the Bodyshop's Anita Roddick and Ecosolar. Ecosolar also helped coordinate nearly all of Mazunte's ecotourist activities, provided training and environmental education.

Backpackers and holidaymakers lounge on the sand and tackle the giant Pacific waves. A little further down the beach, fishermen bring in their hauls in the late morning, and prepare their boats for afternoon tours to see dolphins, turtles, tropical fish, and - in a nearby freshwater lagoon - mangroves, crocodiles and iguanas.

The #link:http://tomzap.com/turtle.html:National Mexican Turtle Center#, established on Playa Escobilla in 1991 to protect the animals, also hired fishermen to help find sea turtle nests and move them to incubation areas. All of these schemes provided fishermen with an alternative income, turning them into important conservation allies.

David Mendoza Rodriguez is one of many fishermen who brings visitors to the turtle center to see the animals lay their eggs. 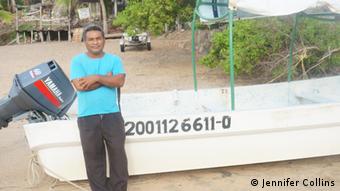 David Mendoza Rodriguez is a fishermen, and also works drumming up business for the town's many eco-tours

"It's a better life in tourism and looking after the turtles," says the 39-year-old, who was born in Mazunte and has been working with the center for 10 years. "If there are no fish, we don't eat. But with tourism, there is more security for my family, and it is better for the environment."

Indeed, the implementation of ecotourism projects has helped reduce poverty in Mazunte, according to the United Nations Development Programme (UNDP). Between 1999 and 2008, average family income increased by 17 percent while homes gained access to running water and electricity.

Diet for the locals improved, too, beyond the staples of sea turtles, corn, rice and beans to include beef, poultry, and more fruit and vegetables.

"Ecotourism has helped Mazunte's people - especially in creating jobs," says María José Fernández Aldecua, a professor at Oaxaca state's University of the Sea. "To some extent, ecotourism - or the idea that Mazunte is an ecotourism destination - has helped to preserve the natural environment."

Not as green as it seems

Despite the advances, not everything is as green as it seems in Mazunte. Rodriguez says poaching still happens, and there are markets that sell turtle eggs in the state of Oaxaca (where the town is located). The government has deployed drones to monitor Playa Escobilla, but they only operate during the day. And poachers have other tactics.

"Some go out fishing for prawns, and when they catch a turtle in the net along with the prawns, they cut the turtle open, take out the eggs, and throw the dead animal back in the water," says Rodriguez.

And according to Eduardo Cruz Esquivel, a graduate student at University of the Sea who is writing a doctoral thesis on Mazunte, ecotourism has had negative impacts on the community, too - for instance, in the form of increasing urban sprawl. 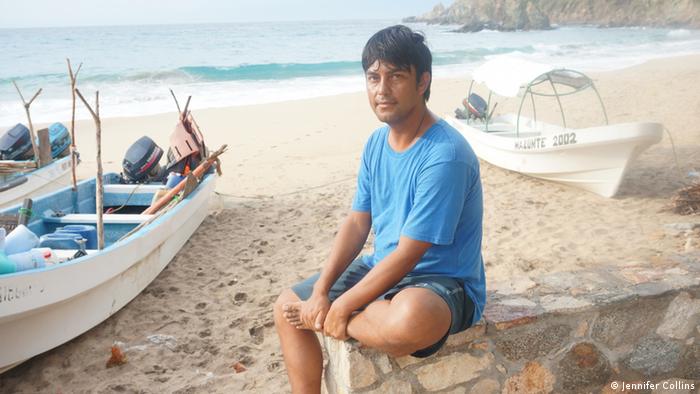 Juan Ochoa is a lawyer from the city of Puebla, who moved to Mazunte 20 years ago to be closer to nature and work in ecotourism

Tourist numbers have also shot up over the past five years, making the sector less sustainable. This situation was exacerbated when the community expelled Ecosolar from Mazunte for reasons that are still unclear, adds Esquivel.

"Mazunte was an example of ecotourism in the first two decades, but they lost their direction when they decided to remove Ecosolar from the community," says Esquivel. "Now they work by themselves [but they still don't have] enough knowledge of tourism."

“They need advice on tourism, to strengthen their assembly, improve community participation and empowerment, because they have sold their main attractions to government or private enterprises," Esquivel thinks.

Still, the sea turtles appear to be safe enough for now. Ochoa, who is a lawyer by profession and moved from the city of Puebla to Mazunte to make a living from tourism, says the people now feel the sea turtle is their lifeline. As such, they are dedicated to making sure they keep them safe.

"We know the turtles provide more options when they are alive, it's better when we have ecotourists than when we kill turtles and they eventually die out - then we have nothing."