Progress in Afghanistan gets too little recognition, says Westerwelle | Germany| News and in-depth reporting from Berlin and beyond | DW | 07.08.2010

Progress in Afghanistan gets too little recognition, says Westerwelle

In an interview with DW-TV, German Foreign Minister Guido Westerwelle stresses that the international alliance has not failed in its mission in Afghanistan. 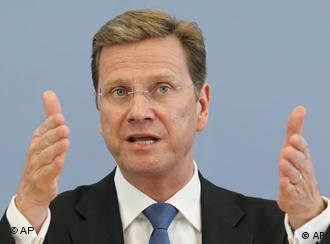 Westerwelle says it's in Germany's best interests to succeed in Afghanistan

In an interview with Deutsche Welle, German Foreign Minister Guido Westerwelle discusses the situation in Afghanistan, warning of setbacks but also stressing the achievements.

DW: Is the war in Afghanistan a political nightmare for you?

Guido Westerwelle: I don't think it's something anyone would wish upon themselves. Nobody relishes having political responsibility in times like these. The decision was taken many years ago by the government of the time and we now have to face up to our responsibility.

We have to contribute to our own security, to protect ourselves and our citizens from terrorism as far as possible. And it's also in our interest that Afghanistan develops positively and becomes a stable country again in the future.

There have been two Afghanistan conferences this year, one in London and one in Kabul. You took part in both and you played a major role in one. A basic framework of action was agreed, involving more security force training, attempts to integrate former Taliban and more civil reconstruction. Six months on, has there been any progress? Or is it too early to judge?

Well, the situation is varied. I fear we're going to go through some security setbacks first. The harvest season is coming to an end. Experience has shown that that often aggravates the security situation. On the other hand, there are 134 districts in the north and only eight of those are regarded as being particularly dangerous. So you have to see that as well as building roads and schools, including girls' schools, we've helped stabilize the region politically. That was our main goal.

Our other goal is to be able to transfer responsibility for security to the Afghan government in 2014. That's also President Hamid Karzai's goal and it was agreed by the international community at the recent Afghanistan conference in Kabul.

Still, many people have the impression that things are not really improving in Afghanistan. Why is civil reconstruction progressing so slowly? 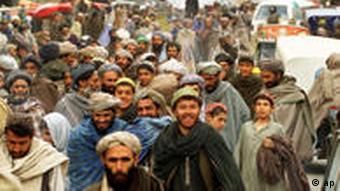 I believe you've got to look at the various aspects differently. It's true that some areas of development are not progressing much. But others have seen positive changes and that should be appreciated. You mustn't forget that we're there because the great majority of ordinary Afghans want us there.

At the same time, we've now got to implement the change of strategy that we agreed first in London and then in Kabul - and that involves achieving political reconciliation.

Are you finding you're increasingly able to 'win the hearts of Afghans ' - as one former defense minister put it? Are Afghans open to that?

Yes. As far as we know, most of the population is grateful for what the international community is doing. The debate in Germany and other European countries just shows you the setbacks, the attacks and all the negative issues, things that are not working. You rarely see examples of progress.

One such example is the Peace Jirga gathering. About 1,600 delegates attended and managed to reach an agreement, and about 20 percent of the delegates were women. In my opinion, developments like that receive too little recognition.

You can't understand Afghanistan without looking at its neighbors. Let's start with Pakistan. The country is actually an ally, but, as we've come to see, there are sections in that society that oppose us - some would even call them enemies. Is the government in Islamabad not playing fair?

I think, even there, you have to see the successes. For example, in the run-up to the Afghanistan conference, a trade deal was agreed between Afghanistan and Pakistan. That doesn't sound all that spectacular, but if you know the history of the two countries, it's a pretty amazing event.

Then there's a further issue to consider. We need the neighbors, we need regional cooperation to be successful. In London at the beginning of the year we were missing one country from the region. But in Kabul the entire region was represented and agreed to the declaration. That helps strengthen the bonds between neighbors. We want to encourage that. 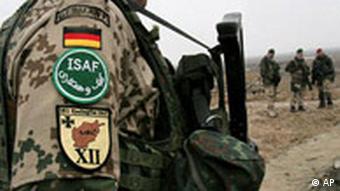 German troops have been in Afghanistan since 2001

That of course is difficult to imagine, for example with Iran. And that's who we're talking about in this case. Sanctions have been imposed on the country, people are scared of nuclear arms; they're scared of the Iranian president. But you also have to engage the Iranians somehow, in order to stabilize Afghanistan. Is such a balancing act realistic?

Well, it's necessary, or at least it's essential we try. The EU and the UN didn't decide on sanctions in order to oppose a country, or to prevent Iran from using nuclear power for civilian purposes. Instead, we want to see the Iranian government return to the negotiating table, to cooperate, to provide transparency - things that Iran has actually already committed itself to.

All countries are permitted to use nuclear power for peaceful and civilian purposes. But they must also cooperate with the International Atomic Energy Agency in Vienna, and provide complete transparency to demonstrate they are using it for exclusively civilian purposes - and not secretly developing a bomb. That is what we need to prevent, and we remain willing to negotiate with Iran.

I could also imagine that talks could take place in September between our European colleague Catherine Ashton and the Iranian side. That's our goal. But it requires cooperation and transparency from Iran - and Iran must not lay down any preconditions for comprehensive talks.

The war in Afghanistan is viewed skeptically in many countries - in most countries, by the majority of the population. After eight years of involvement in Afghanistan, how long will patience last for the hope of reaching the goal we want to reach - a relatively peaceful Afghanistan?

That's a very hard question to answer. And I can only advise that we don't lose sight of our own interests. It is in our interest that we do not allow those who export terrorism into the world…to turn Afghanistan back into a safe haven where they can re-arm. People forget that many attacks were planned there, and some of those attacks also targeted Europe.

Yes, we should be skeptical, and view any foreign deployment of the Bundeswehr initially with a healthy dose of skepticism. But I would also suggest that we understand that this also concerns our own security, and that is why we want to be and must be successful. But we also need a clear perspective on withdrawal - something we can work towards by doing even more, as, for example, in supporting civil redevelopment.

Officials say eight foreign medical personnel, including six Americans, one Briton and one German, are among 10 people found shot dead in northern Afghanistan. The Taliban have claimed responsibility for the killings. (07.08.2010)