Dutch withdraw from Afghanistan | Europe | News and current affairs from around the continent | DW | 01.08.2010

The Netherlands pulled its troops out of Afghanistan on Sunday, after serving there with distinction for four years. The withdrawal is seen as a blow for the NATO-led coalition, who had wanted the Dutch to stay on. 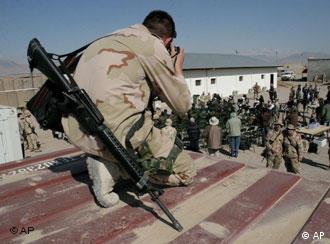 The Dutch were seen by others as exemplary soldiers

Dutch troops have left Afghanistan after four years, handing over control to an American-led group of soldiers. Just under 2,000 Dutch soldiers had been deployed in central Uruzgan province since 2006. But now, after a political row in the Netherlands, the army has been forced to pull out of the country.

A statement from the International Security Force said, "Dutch forces have served with distinction on Uruzgan, and we honour their sacrifice and that of their Afghan counterparts during the Netherlands' tenure in the province."

NATO had asked the Netherlands to extend their work in Uruzgan province, where opium production is rife, and the Taliban remain active.

The row over the Dutch presence in Afghanistan led to the collapse of the coalition government in February. The mission has cost the Dutch state some 1.4 billion euros (1.8 billion dollars). 24 Dutch soldiers have died during the Afghan mission.

Praise for the withdrawing force

The Dutch were widely admired for their comprehensive approach to defence, development and diplomacy. NATO Secretary General Anders Fogh Rasmussen praised them as "the benchmark for others." US President Barack Obama said they were "one of the most outstanding" forces in Afghanistan.

The withdrawal comes at a sensitive time for the NATO alliance. Canada is also pulling its soldiers out of Afghanistan next year, whilst Britain and the US have pledged to reduce their troop numbers by 2011.

A withdrawal of Dutch troops from Afghanistan would certainly increase the pressure on its allies to take their place. But it is unlikely to trigger a domino effect among other countries who have troops there. (23.02.2010)

The economic crisis raises the risk that European allies will pull back from Afghanistan at a time when president-elect Barack Obama is expected to reach out to them for help, NATO's supreme commander warned Friday. (10.01.2009)