Pro-secessionist Catalans took to the streets on the region's Diada national day. The political temperature is rising as Madrid and Barcelona head for a showdown ahead of an October vote on independence. 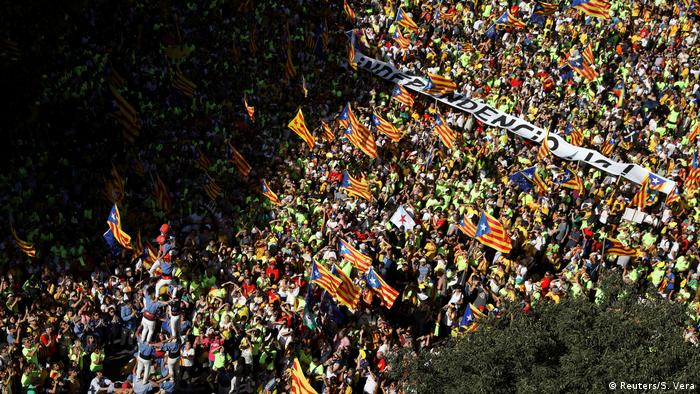 The streets of Barcelona were filled with Catalonia's colors of yellow and red on Monday as hundreds of thousands of people celebrated the region's national day, known as "Diada." The event was dominated by pro-independence supporters, hoping that an October 1 referendum will allow the semi-autonomous region to split with Spain and become a separate country.

The fact that Spain's central government has declared the upcoming vote illegal did not tamper the excitement of pro-secessionists, many of whom enthusiastically waved the "estelada" — the red-and-yellow striped flag adorned with a blue triangle and star that is the emblem of an independent Catalonia. T-shirts, banners reading "Si" (yes) and signs called for independence. Many shouted "Independence" and also sang the Catalan national anthem. 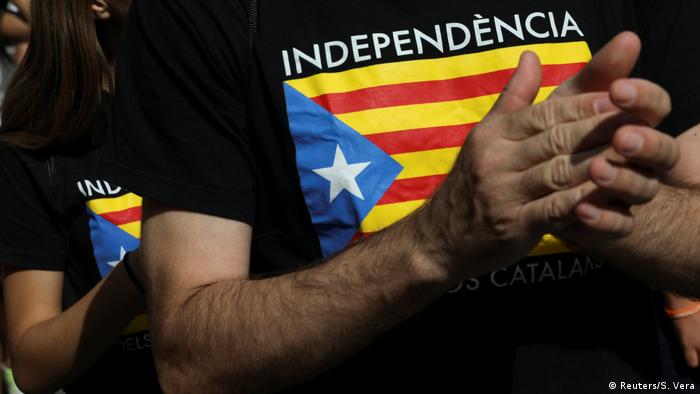 A t-shirt with the flag of an independent Catalonia

However, the issue remains divisive among the Catalonian's 7.5 million inhabitants. Many Catalans want a referendum to settle the independence issue but want it to take place through constitutionally-approved proceedings.

Barcelona's police, the Guardia Urbana, tweeted that around a million people were on the streets of Barcelona to celebrate the holiday that marks the 1714 defeat of the then-highly autonomous region by the Spanish crown.

However, the central government's delegation in Catalonia disputed the number, instead placing it around 350,000. Spanish daily El Pais claimed around 500,000 took part based on its own rough calculations using surface area.

The Catalan police, known as Mossos, thanked all participants for their collaboration and civility.

Demonstrators concentrated at the intersection of the Paseo de Gracia and Aragon, filling the downtown avenues to form a giant "X" symbolizing a yes on the October 1 ballot that will ask whether voters whether they want Catalonia to become an independent state.

Catalan President Carles Puidgement tweeted a video showing the crowded streets and thanking all those who turned out to push for the referendum.

"What more do we have to do to make it understood that the people of Catalonia want to vote?" Puigdemont asked.

Read more: Spain vows to cut off funds to Catalonia over independence vote

Madrid and Barcelona face off

Rajoy tweeted a simple message Monday morning: "For a Diada of liberty, coexistence and respect for all Catalans."

Rajoy's government considers the planned vote to be illegal, and last week Spain's highest court suspended the referendum law that had been passed one day earlier by Catalonia's regional parliament in a fast-tracked measure. But Puigdemont's pro-independence regional government has vowed to push on with the vote.

Catalan nationalists want independence for a variety of reasons. Some resent that the wealthy region sends more money to the central government than it receives from it. Others feel that the distinctive Catalan language and cultural traditions make them a nation entitled to their own state based on right of self-determination.

According to July 2017 polls conducted by the regional government, there is 41 percent support for Catalonia as an independent state, a slight drop from 44 percent in March. On the other hand, 49 percent oppose a split from Spain.

Since the 2012 Diada — the first year it was celebrated within the shadow of a secession movement  — Barcelona police have pegged the total number of the day's pro-independence participants above a million, save for last year when they estimated a turn out of 800,000. The central government delegation has estimated the turnout during those years to be much lower.