Hardliners on both sides of the diplomatic rift between Saudi Arabia and Iran are dashing any hopes of peace for Syria and Yemen. 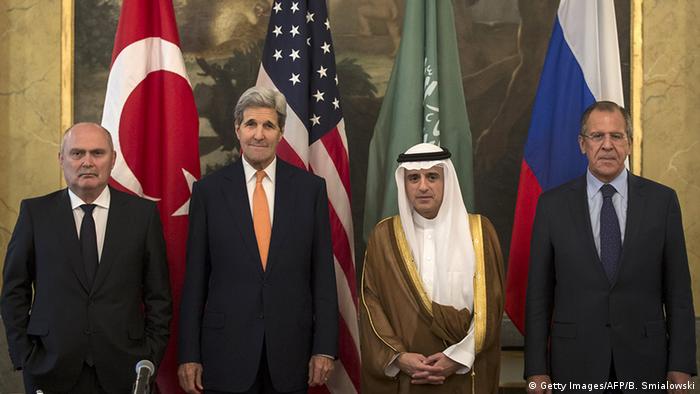 This is not the first time that Saudi Arabia has cut diplomatic ties with Iran. It happened once before, in 1988. Then, too, the Saudi embassy in Tehran was stormed. Ties were only re-established in 1990, after common enemy Saddam Hussein invaded Kuwait.

But unlike then, the escalating hegemonic conflict between Saudi Arabia and Iran now has consequences that extend far beyond both states and into the whole region.

Both countries are deeply involved in the wars in Syria and Yemen and are also at odds with each other in Iraq. Any hope of a breakthrough in Syria depends on rapprochement between the Saudis and Iranians, Julian Barnes-Dacey of the European Council on Foreign Relations told DW. It would have been a tremendous diplomatic feat to bring Tehran and Riyadh to the negotiating table in Vienna to discuss Syria's future. According to Barnes-Dacey, the latest incidents have made the prospects of any progress on the issue much more difficult.

Trust has been erased

Although Saudi-Arabia has indicated that it will not give up on negotiations, Sebastian Sons of the German Council on Foreign Relations (DGAP) says he's skeptical. In an interview with DW, he said that whatever trust the two sides had in each other has now been lost.

"Given this, I can't imagine that there will be any concrete results to come out of such a heated situation, whether it's next week during the negotiations about Yemen, or at the Syria talks in Vienna," said Sons.

Barnes-Dacey of the ECFR spoke of an "almost existential struggle for regional power" between Saudi Arabia and Iran. "There is a clear desire by hardliners on both sides to entrench polarization as a means to avoiding the necessary compromises that could underpin any peace process," he said.

With regard to the storming of the Saudi embassy in Tehran, Barnes-Dacey spoke of opponents of Iranian President Hassan Rouhani who would sabotage his efforts to reach out to the West or other regional actors "and who are happy to play along with any Saudi gambit towards polarization of the situation."

The balance of power between the two rivals has shifted as of late to favor Tehran. In particular, the Saudis are still smarting from Iran's nuclear deal, which brought Tehran back onto the international stage.

At the same time, the Saudi monarchy has to deal with the sinking price of oil, growing frustration among its own population, and the gradual yet undeniable distancing on the part of the United States and other western allies.

The Saudi foreign minister has said escalating tensions between Riyadh and Tehran would not affect Syrian peace talks. The statement comes as Kuwait recalled its ambassador from Iran in support of Saudi Arabia. (05.01.2016)

Germany's foreign minister told "Bild" newspaper that both countries must focus on solving military conflicts in the region. Tensions are worsening between Tehran and Riyadh over the execution of a prominent cleric. (05.01.2016)

"Whether or not it's true, Saudi Arabia feels as though it is surrounded by enemies dominated by Iran, whether in Bahrain, Syria, Yemen, or Iraq," said Sons.

At the same time, he added that Riyadh has a tendency to overestimate Iran's influence on the Shiites in Bahrain, on Saudi Shiites, and on the Houthi rebels in Yemen. In his view, Riyadh suffers from a level of paranoia with regard to Iran, which makes real political and pragmatic exchanges impossible, and prevents the government from finding even the smallest common denominator with Tehran. As the religious and political power over the Sunnis, Riyadh has been able to convince some of its allies to also break off or limit diplomatic ties with Tehran: Bahrain, Kuwait, the United Arab Emirates and Sudan, for example.

It will be accordingly difficult to mediate between the two opponents. Russia has offered its services as a potential mediator. But both Barnes-Dacey and Sons think it's too big a job for one partner. The United States is essential to the process, even if there's been turbulence between Riyadh and Washington lately.

And the Europeans? They likely can't do much more at the moment than create a forum to make diplomatic activity between the two sides possible. That won't, of course, create the kind of headlines generated by storming an embassy or executing a high-profile cleric. It's more in line with what Iranian nuclear negotiator Said Jalili compared to the weaving of a rug: Progress comes in millimeters.

US and Mexico vow to cooperate on border crisis