Tehran has warned Saudi Arabia to stop working against it. Riyadh cut diplomatic ties with Tehran after Iranis stormed its embassy and consulate there, a backlash to Saudi Arabia executing a prominent Shiite cleric. 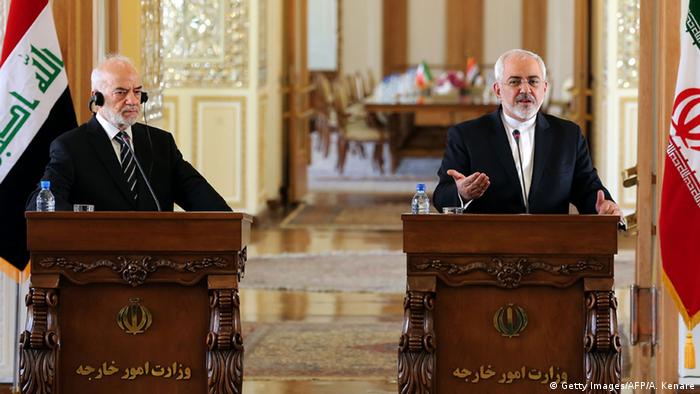 "We have treated these actions with magnanimity and nobleness but unfortunately our neighbor, Saudi Arabia did not respond to it," Zarif said, speaking alongside his Iraqi counterpart Ibrahim al-Jafaari in the Iranian capital on Wednesday. "The process of provoking tension must be stopped."

The diplomatic standoff between Saudi Arabia and Iran began on Saturday, when the Sunni kingdom executed 47 people, including a popular Shiite cleric Nimr al-Nimr. Al-Nimr was a key figure in anti-regime protests in 2011 and was arrested in 2012 after he called for two governorates to be separated from the kingdom. 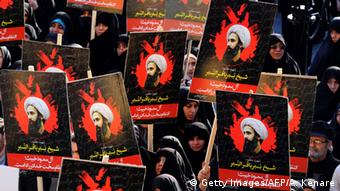 Protesters in Iran responded to al-Nimr's hanging by attacking and setting fire to Riyadh's embassy in Tehran and its consulate in Mashhad. Zarif said that the rioting had had no official sanction. "All Iranian officials condemn it," he said.

However, Riyadh severed connections with Tehran on Sunday. Some Sunni allies, including Bahrain, the United Arab Emirates, Kuwait and Djibouti followed suit. Bahrain also reported dismantling a "terror" cell linked to the Iran-backed Hezbollah that was planning attacks in the kingdom. Saudi Arabia returned Iran's diplomats in Riyadh and Jeddah to their home country on Wednesday.

Zarif reacted by saying Saudi Arabia had been opposing his country's diplomacy for over two years. Saudi Arabia was "moving against Iran's efforts" by opposing Tehran's nuclear deal signed with western countries and "taking measures against the Iranian people" by keeping oil prices low, he said. 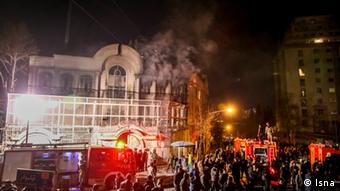 Protesters set fire to the Saudi Arabian embassy in Tehran

The nuclear deal, once implemented, would gradually eliminate some sanctions against the Islamic republic, potentially posing a challenge to Saudi Arabia, which has been pumping out more oil to reduce prices, partly in anticipation of Iran rejoining the market.

Meanwhile, Iraq offered to mediate to find a solution for the crisis between the two countries. Speaking in Tehran with Zarif, Iraqi foreign minister al-Jafaari said he had spoken to foreign ministers of some Arab countries to "reduce the consequences of this issue and prevent enemies from dragging the region into a war that can have no winners." Russia also offered to act as a broker.

The United Nations and the US called for an end to the diplomatic ructions, with US Secretary of State John Kerry's office issuing a statement, "stressing the need for dialogue and engagement."

Sunni-dominated Saudi Arabia and Shiite-majority Iran have been standing on opposing sides in the Middle East's worst conflicts. Iran supports Syria's President Bashar al-Assad and reportedly backs the anti-government Hezbollah militia in Lebanon. Tehran is also reportedly backing the Houthis rebels in Yemen, while Saudi Arabia is leading a Sunni coalition in airstrikes seeking to restore control of the country for President Abed Rabbo Mansour Hadi.

Iran's deputy foreign minister has hit back at Riyadh's decision to order Iranian embassy officials out of the country. It follows an attack on the Saudi embassy in Tehran after the execution of a top Shiite cleric. (04.01.2016)

UN warns of coronavirus surge in humanitarian needs 38m ago