Porsche to pay fine over involvement in pollution scam | Business | Economy and finance news from a German perspective | DW | 24.10.2018

Porsche to pay fine over involvement in pollution scam

Volkswagen brand Porsche has been ordered by a regional German court to pay €47 million in damages for its role in the VW Group's emission-cheating scandal. Executives look likely to appeal the verdict. 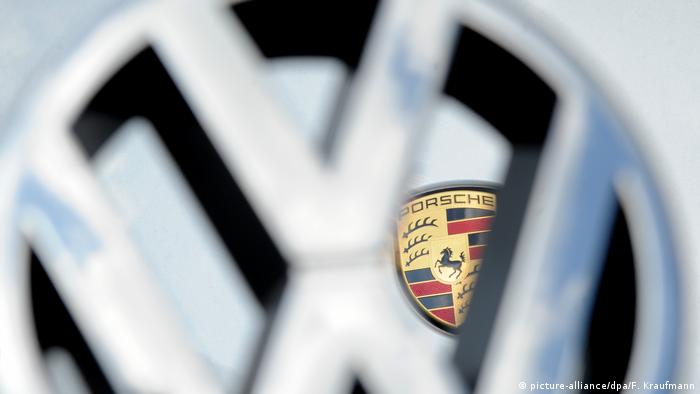 A regional court in Stuttgart on Wednesday told German carmaker Porsche it would need to pay a total of some €47 million ($54 million) in damages for what judges felt was its faulty information policy surrounding the Volkswagen Group's large-scale emissions-cheating scandal that broke in 2015.

The court, whose verdict is not yet final, found that Porsche as Volkswagen's largest shareholder was in breach of its obligation to publicly disclose information with a potential to influence the carmaker's share price.

The judges reasoned that Porsche revealed news related to VW's emissions-cheating scam too late for investors to react in time.

The pollution scandal involving the use of defeat devices in about 11 million vehicles globally to manipulate emissions levels in laboratory tests was first revealed in 2015 and has since led to billions of dollars in compensation payments and multiple lawsuits in the US and other nations. It also contributed to a push for more stringent car pollution standards in the European Union.

The Stuttgart court found that Porsche shareholders should have been informed about irregularities at the carmaker as early as 2014, assuming that executives must already have known about the cheating scheme.

Investors lost millions when VW shares plummeted after the scandal broke in September 2015, with no profit warning alarming them prior to the hefty market reaction.

Both Porsche and VW have denied any criticism of their information policy, with Porsche likely to appeal Wednesday's verdict.