Porsche to investigate forced labor under Hitler | Germany | News and in-depth reporting from Berlin and beyond | DW | 12.10.2009

After already admitting to using minimal forced labor during the Nazi regime, new investigations of Porsche's role under Hitler have produced accusations of widespread slave labor. 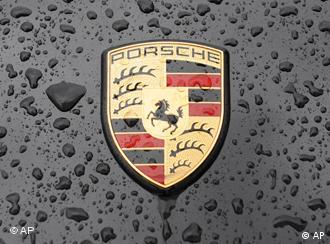 Porsche was founded two years after Hitler took over Germany

Porsche says it is taking the allegations seriously after a report published by a German economics journalist suggested that hundreds of people were forced to work at Porsche for little or no pay.

"We need to process the subject; we are just at the start of the procedure," a Porsche spokesman said.

The issue came to light after Ulrich Viehoefer, an economics journalist based in the city of Stuttgart, conducted research on Ferdinand Porsche's role in Germany during the Nazi era.

"In contrast to other German industrial families, the Porsche-Piechs have not completely come clean on their dealings in the Nazi period," Viehoefer told Deutsche Welle.

Viehoefer claims that over 300 people were forced to work for Porsche, over half of the luxury car maker's workforce at the time. He published his findings in the book, "Nazi Culprits in Stuttgart."

Porsche has already admitted to implementing forced labor at its factories under Hitler's rule. So far, Porsche has admitted to using only minimal slave labor. It has acknowledged that 50 people had been subjected to forced labor. They were said to be Poles, Russians, Dutch, Flemish, Belgian, Czech, and Italians.

Porsche added, meanwhile, that it has paid reparations for those offenses. It said the company had given 2.5 million euros to a German fund aimed at compensating victims of slave labor.

"Money isn't all that counts," Viehoefer said, adding "I asked a former forced laborer at Porsche from Poland whether the company had ever apologized to him for his suffering, but he said that nothing of the kind had ever happened."

A new film set to open in Germany this week tells the true but little-known story of how the Nazis barred a female Jewish high-jumper from the 1936 Olympics and replaced her with a male athlete dressed as a woman. (09.09.2009)

Though not widely known, it was never really a secret that the Nazis ran brothels in many concentration camps. But never has there been as comprehensive an account of the fact as in a new book by a German researcher. (19.08.2009)

Verdict due for ex-Nazi war criminal

A German court is expected to hand out a verdict against a Nazi war criminal 65 years after the end of World War Two as two more trials are set to start in the coming months. Will these be the final cases of this kind? (10.08.2009)