Poroshenko calls Maidan a 'victorious battle' in war for independence

To commemorate the "heavenly hundred" who died last year after snipers opened fire on Maidan, Poroshenko has called theirs a "victorious battle in the war for our independence." He also blamed Russia for the bloodshed. 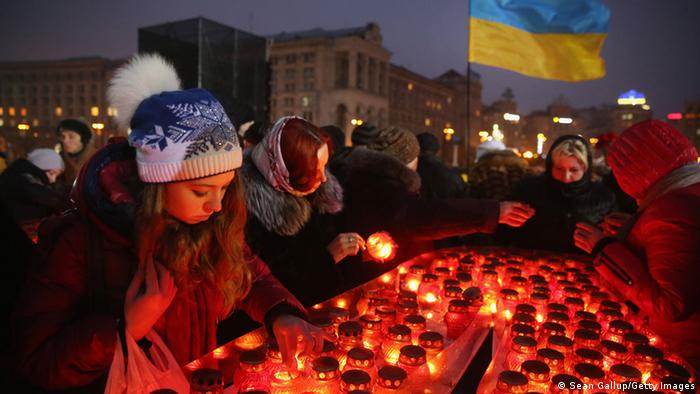 Ukrainian President Petro Poroshenko addressed thousands of Ukrainians gathered to commemorate one year since the killings of over 100 anti-government protesters on Independence Square, or Maidan, on Friday.

"They stood here shoulder to shoulder, people of different ethnicities and faiths," he said. "The revolution was a first, and most importantly, victorious battle in the war for our independence."

He added that there was strong evidence that the killings had been organized by Russian intelligence. He said Vladislav Surkov, a senior aide to Russian President Vladimir Putin, "led the organization of foreign sniper groups on the Maidan."

At the ceremony, beams of light were projected onto the dark sky during a minute of silence for the dead, who are referred to as the "heavenly hundred." The Ukrainian national orchestra played Mozart's Requiem from the stage as a picture of the national flag fluttered on a digital screen behind.

Poroshenko said the former president, Viktor Yanukovych, who fled to Russia shortly after the Maidan incident, was a "brutal and willing puppet" who would "burn eternally in hell," commenting on Moscow's refusal to extradite Yanukovych.

The Russian Foreign Ministry responded to the Ukrainian president's accusations against Surkov on Friday evening, calling them "complete nonsense."

"The international community expects [an investigation by] the Ukrainian leadership," he said.

'We will stop the war'

Addressing the lethal conflict, the pro-EU Poroshenko also commented on the shaky ceasefire which went into effect last Sunday.

"We will stop the war and after a few years everyone will see how Ukraine has changed; we feel with every cell how the people demand that change be accelerated."

The Ukrainian president also vowed to fight the "fear, panic and mistrust" that he said "a neighboring state" was creating in Ukraine.

Since the Maidan massacre, Russia has annexed the Crimean Peninsula, and there has been an ongoing armed conflict in the east of Ukraine that has killed at least 5,600 people to date. Leaders in Kyiv, the EU and the US have accused Moscow of providing military support to the separatist fighters.

Another ceasefire went into effect less than a week ago after an agreement between Ukraine and pro-Russian separatists signed in Minsk, but was broken soon thereafter in a battle over the city of Debaltseve, where rebels forced Ukrainian troops to pull out of the city.

Merkel, Hollande call on both sides to uphold agreement

Meeting in Paris on Friday, German Chancellor Angela Merkel and French President Francois Hollande in a joint press conference pressed the importance of upholding the "Minsk II" deal and called for it to be "fully respected."

Merkel mentioned the possibility of new sanctions, should the agreement be broken:

"We didn't go to Minsk to impose sanctions. We went to achieve peace, which is a long and difficult process."

German Foreign Minister Frank-Walter Steinmeier also announced on Friday that the foreign ministers of Ukraine, Russia, Germany and France would meet in Paris next Tuesday to discuss the agreement's further implementation.

Kyiv's lost war for "the hearts and minds" of eastern Ukrainians

One year ago, Ukraine saw a transition of power in the wake of rioting in the streets. At the time, Russian media instilled fear and contributed to laying the groundwork for the current war in eastern Ukraine. (20.02.2015)

France, Germany, Russia and Ukraine have pledged their support to the Ukraine ceasefire deal. Kyiv is observing one year of the "Maidan Revolution" in which 100 people were killed amid fighting in its east. (20.02.2015)

Fatal clashes have re-erupted in Kyiv, shattering a brief truce between opposition leaders and Ukraine's government. At least 25 people were killed, some allegedly by snipers, as demonstrators clashed with riot police. (20.02.2014)