Pope urges Europe to welcome migrants from North Africa | Europe | News and current affairs from around the continent | DW | 24.04.2011

In his Easter sermon, Pope Bendict VI lamented the violence and conflicts in North Africa and the Middle East and called on Europe to accept more migrants from war-torn countries. 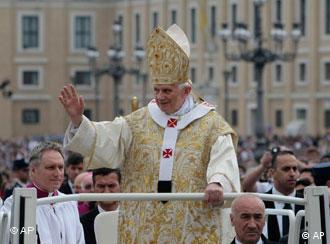 In his traditional Easter message to the world Pope Bendict XVI contrasted the joy of the Easter season with the violence and strife in North Africa and the Middle East and called on Europe to welcome more migrants from war-torn areas like Libya.

"Here, in this world of ours, the Easter hallelujah still contrasts with the cries and laments that arise from so many painful situations: deprivation, hunger, disease, war, violence," he said in his "urbi et orbi" (to the city and the world) address.

He urged diplomacy in Libya, where NATO is involved in a mission to contain a deadly conflict between forces loyal to Moammar Gadhafi and rebel factions demanding his resignation. 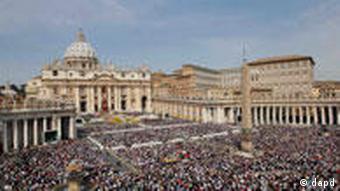 The 84-year-old pope presided at mass for more than 100,000 people who had flocked to a flower-strewn St. Peter's Square in Rome.

The pope, who delivered his Easter greetings in 65 languages, appealed to European governments to welcome those trying to escape war in their countries.

"May help come from all sides to those fleeing conflict and to refugees from various African countries who have been obliged to leave all that is dear to them," he said.

Over the last month, a row over how to handle thousands of refugees from North Africa, has caused ructions in the EU, with Italy complaining that it has been left to its own devices dealing with migrants flocking to the tiny Italian island of Lampedusa.

Pope Benedict also urged peaceful co-existence in Ivory Coast, which has been embroiled in a violent and deadly conflict, triggered by a standoff between ousted President Laurent Gbagbo and newly-elected President Alassane Ouattara.

On Good Friday, in a pre-recorded program broadcast on Italian state television, the pope responded to seven questions put forward by selected lay people around the world. It marked a new attempt by the head of the Roman Catholic Church to freshen up his image.

The program took the format of an Italian TV chat show, with a moderator and a panel of experts before a studio audience. He answered questions about ongoing conflicts in Africa and the Middle East as well as controversial issues such as euthanasia.

The Easter weekend has kicked off in Germany with bright sunshine and soaring temperatures. But while many were indulging in Easter eggs, thousands marked another Easter tradition; peace marches. (23.04.2011)

The Catholic Church in Germany has recommended a sum of 5,000 euros to compensate sexual abuse victims. The church will also contribute extra money to a so-called "prevention fund" and pay for therapy for the victims. (02.03.2011)