Pope remains philosophical in historic speech to German parliament | Germany| News and in-depth reporting from Berlin and beyond | DW | 23.09.2011

The pope has made a landmark speech to the lower house of parliament in Berlin, his first such address to a national legislature. But in the end it turned out to be more philosophical than political. 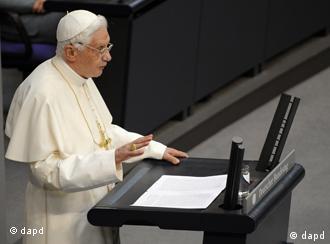 Benedict is the first ever pope to address the Bundestag

Was the hype all for nothing? Before the long-awaited speech to the German lower house of parliament by Pope Benedict XVI, a number of opposition parliamentarians had protested against the appearance of a religious leader in the Bundestag, on the grounds that it violated the separation of church and state. But in fact Pope Benedict's address was more like a philosophical lecture than a political tool. The former theological professor, Joseph Ratzinger, reflected mostly on the relationship between reason and faith.

The pope spoke of how difficult it is for politicians in the modern world to recognize true justice in lawmaking. He advised the parliamentarians to remember the Christian roots of the European conception of justice. He said that nature and reason were the true sources of justice.

In his 20-minute speech the pope issued a clear rejection of the purely scientific, functional views of nature and man.

"Wherever positivistic reason holds sway - and that is largely the case in our public consciousness - the classic sources of recognition for ethics and justice are suspended. This is a dramatic situation, which affects all of us and it's necessary to hold a public debate on this issue - and urgently bringing about such a debate is one of the key aims of my speech," the pope said. 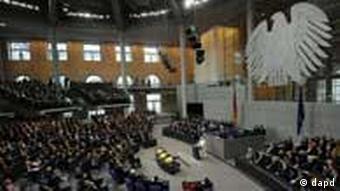 Benedict spoke for around 20 minutes

As an example of a political movement, which has managed to move away from the purely scientific, positivistic world view, the pope cited none other than the ecological or "green" movement. He said they had recognized that there is something wrong with our approach to nature.

Nature, he continued, wasn't just matter or material, but had an innate dignity. He added that he did not want to make propaganda for a particular party, but on this issue the ecological movement was a "cry for fresh air." Ironically, the Greens had heavily criticized the fact that a religious leader was being allowed to speak in parliament. The praise for the green movement earned a round of applause in the chamber.

The culture of Europe

The pope developed the idea that man also has an ecology, a nature. That was not only comprised of "self-created freedom," but also of spirit and will. He said only then could true human freedom be achieved, which, in the form of human rights, would give people dignity. In the end, he said, we had to ask the question, whether objective reason, evident in nature, presupposed a creative reason, and a creative God.

Pope Benedict said that the European understanding of culture and human rights had developed from "a creative God." He said it was important to retain this culture. If Europe were made up of purely functioning mechanisms, it would give itself up to cultural philistines.

The pope wanted this to stand as a call to parliamentarians and advised them to have a "listening heart" to be able to understand good and evil and truly implement justice. In the bible, he said, the young King Solomon asked for a "listening heart" when God granted him a wish.

The pope was speaking in front of an almost packed chamber - only a few dozen left-wing opposition seats remained empty. Those who were present gave him a standing ovation at the end. 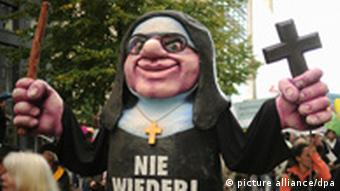 Demonstrations were smaller than expected

At the same time, beyond the parliament building, six anti-pope demonstrations were underway in the center of Berlin. For security reasons, the demonstrators were kept away from the immediate vicinity of the parliament and instead gathered a kilometer away on Potsdamer Platz.

Originally some 20,000 people had been expected, but estimates suggest around 10,000 actually turned up. Some 6,000 police officers were on duty to protect the pope and to regulate the traffic near the sealed-off buildings and streets.

On Thursday evening, some 70,000 people attended an open-air Mass in Berlin's Olympic Stadium. The pope entered the arena in a bullet-proof glass-sided white van. A giant altar had been set up for the event. Thousands of pilgrims from the west of the country traveled to the capital attend the Mass. Berlin itself - like the rest of the former east Germany - is not a traditional Catholic stronghold.

Catholics in Germany are expecting the Pope to talk about the current crisis gripping the church in the course of his visit. It lost a large number of members following the revelations about sexual abuse in church institutions. Victims of the abuse are demanding clear and healing words from the pope. Archbishop of Freiburg Robert Zolitsch said he expected that the pope would support a dialogue between lay people and church officials and give people encouragement.

"Welcome home!" That's how the German president greeted Pope Benedict XVI on his arrival in Berlin. The pontiff was given a ceremonious welcome, but said his aim was to give Catholics courage to stay true to their faith. (22.09.2011)

Pope Benedict XVI has arrived in Germany for his first official state visit. Tens of thousands of Germans, including politicians, have vowed to protest the visit and his speech to the Bundestag. (22.09.2011)

In his visit to Germany, Pope Benedict XVI can expect to meet an alienated laity. While there are some areas where dissatisfied Catholics can hope for reassurance, others have a snowball's chance in hell. (21.09.2011)

Pope emphasizes the importance of Catholic values in Bundestag speech