Archbishop of Washington Wilton Gregory broke new ground by becoming the first US cardinal of African descent in a Vatican ceremony. Pope Francis also gave the title to 12 others and warned the group against corruption. 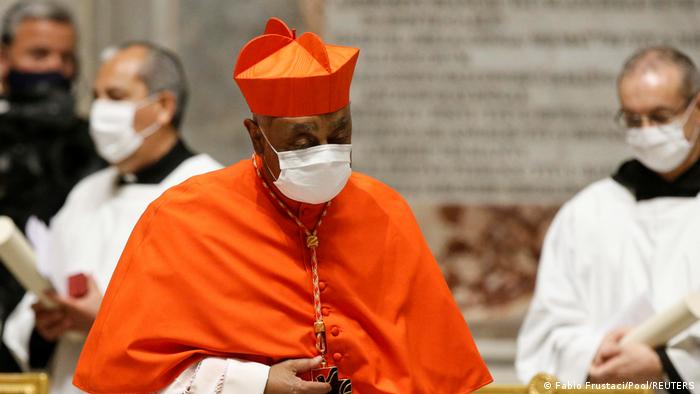 The Catholic Church gained its first African American cardinal on Saturday, with Pope Francis elevating Washington Archbishop Wilton Gregory to the prestigious rank. Although other Black clerics previously served as cardinals, Gregory is the first Black US national to gain the title.

Ahead of the Vatican ceremony, Gregory told The Associated Press news agency that he saw the move as "an affirmation of Black Catholics in the United States, the heritage of faith and fidelity that we represent.''

Gregory's appointment comes after protests triggered by the killing of George Floyd in May against police brutality and racism spread across the Western world.

"There is awareness now of the need for racial reconciliation, an awareness that I have not seen at this level and at this intensity before," Gregory said. 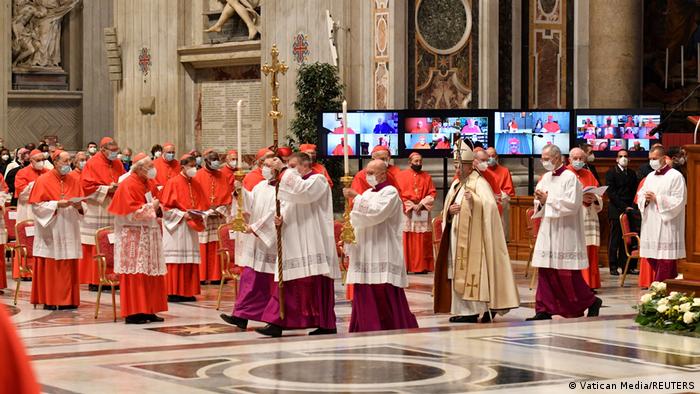 Cardinals wore face masks for the most of the ceremony

The US cleric came into the public eye by decrying a visit made by US President Donald Trump to a Catholic shrine in Washington DC amid anti-racism protests. Gregory said he found it "baffling and reprehensible that any Catholic facility would allow itself to be so egregiously misused and manipulated."

No 'kiss of peace' due to coronavirus

On Saturday, Pope Francis also awarded the cardinal title to 12 other candidates in the Vatican ceremony, which is officially known as a consistory. Traditionally, the event would see the pope give the symbols of the rank — a ring and a red hat — to the men and exchange a "kiss of peace" with the newly appointed cardinals.

However, two of the appointees could not make it to the St Peter's Basilica due to the coronavirus restrictions and had to receive their rings from a papal delegate while attending the ceremony online. The "kiss of peace" tradition was also scrapped to minimize the risk of infection.

During the ceremony, the 83-year-old pope urged the new cardinals to stay close to the people and not to be seduced by trapping of their new rank.

"Let's think of so many types of corruption in the life of the priesthood," he said, warning them not to use the cardinal title for personal advancement.

What's next after Pope Francis?

Out of 13 cardinals promoted on Saturday, nine are under the age of 80, allowing them to vote and run for the next pope after Francis' death or resignation.

The current pope has so far named 73 of the 128 voting-age cardinals, with the remaining 55 named by his predecessor Pope Benedict XVI and John Paul II. The split makes it more likely that the next pope would follow Francis' relatively liberal, reformist path. 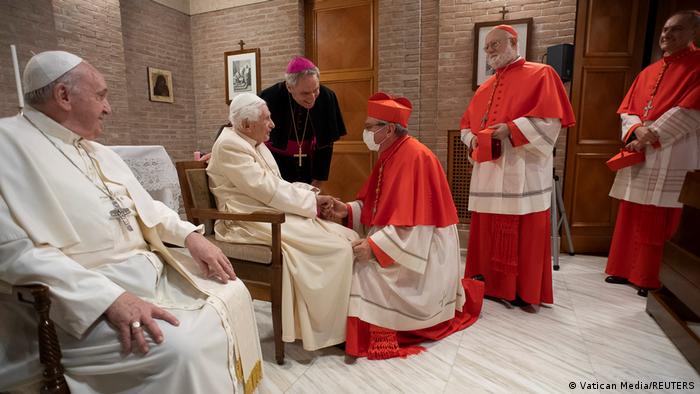 After the Vatican ceremony, the pope and the new cardinals also paid a visit to the retired pope Benedict, who lives on Vatican grounds.