"I should not have been there," said Mark Milley, the most senior US military officer, after accompanying Donald Trump to a photo op following a protest in Washington, DC. He noted the army should stay "apolitical." 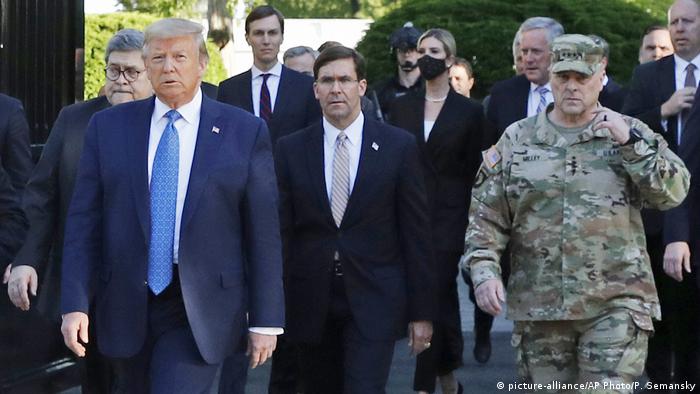 After a photo op involving US President Donald Trump and the nation's top military commander prompted outrage in the US, General Mark Milley said his appearance was a "mistake."

"I should not have been there," Milley, the head of the Joint Chiefs of Staff and the most senior military officer in the country, said on Thursday.

His comments come 10 days after Milley met with Trump and Defense Secretary Mark Esper in Washington, DC. At the meeting, Milley reportedly rejected Trump's request to deploy active duty US troops to quell the unrest sparked by the killing of George Floyd. After that, however, Milley accompanied Trump to a vandalized church at the city's Lafayette Park, where Trump posed with a Bible. The general's presence amid the unrest, and his attire — battle fatigues instead of the dress uniform usually worn for the White House visits — were slammed as a signal that the military was, in fact, supporting Trump and his threats of deploying it domestically.

Reporters, including DW's Alexandra von Nahmen, also noted that security forces used smoke bombs to clear out peaceful protesters and secure the area just ahead of the visit.

According to reports published by US media after the fact, Milley was summoned to the White House on short notice and had no time to change his uniform. Milley and Defense Secretary Esper were reportedly under the impression they were going out to meet the National Guard members stationed outside, and were unaware they would be attending a photo op.

In a pre-recorded video message to new graduates of the National Defense University in Washington, Milley said the "vast majority" of the current anti-racism protests have been peaceful.

"I am outraged by the senseless and brutal killing of George Floyd," Milley said, while also decrying "centuries of injustice" against African Americans.

Commenting on the June 1 event, the military leader stressed the importance of keeping the military "apolitical."

"My presence in that moment and in that environment created a perception of military involvement in domestic politics," Milley said.

While describing his appearance in Washington as a mistake, Milley stopped short of apologizing for it. Even so, the move is likely to further strain an already troubled relationship between the president and military.

Trump has placed distinguished military commanders, most notably generals Jim Mattis and John Kelly, to top positions in his cabinet. Both Mattis and Kelly eventually left Trump's team, and the president has since berated them on Twitter.

Many retired military commanders also slammed Trump's approach to Milley's role in the current wave of protests across the US.

Last week, former Defense Secretary Mattis called the Washington photo op "bizzarre" and said he was "angry and appalled" by the situation.

"Donald Trump is the first president in my lifetime who does not try to unite the American people — does not even pretend to try. Instead, he tries to divide us," Mattis wrote. "We know that we are better than the abuse of executive authority that we witnessed in Lafayette Park." Kelly, formerly Trump's chief of staff, publicly backed Mattis.