Pope Francis has said that gays deserve an apology from Christians for the way they have been treated. He also said apologies were owed to other groups marginalized by the church, such as women and the poor. 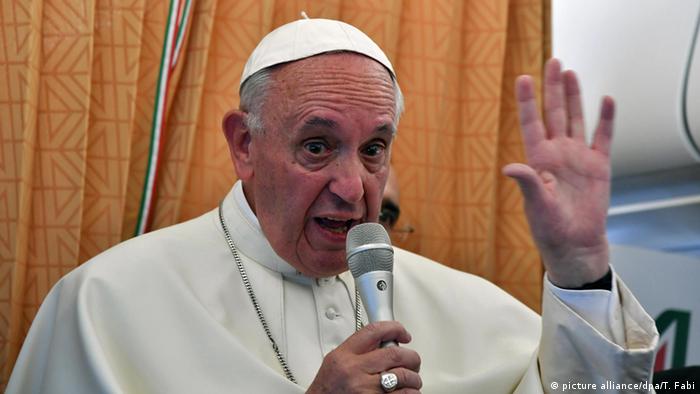 Pope Francis told reporters on Sunday that Catholics and other Christians should apologize to gay people and seek their forgiveness "for not having behaved as it should many times."

Francis' remarks came during a papal plane press conference as he was en route home from a visit to Armenia. He was asked whether or not he agreed with German Cardinal Reinhard Marx's comments on the deadly Orlando gay club shootings. At the time, Marx said the church owed an apology to gay people for marginalizing them.

According to the Catholic News Service, the Pope closed his eyes and shook his head following the question before saying, Christians "must ask for forgiveness. Not just apologize - forgiveness."

"The question is: if a person who has that condition, who has good will, and who looks for God, who are we to judge?" the pope added, repeating his famous "Who am I to judge?" remark about homosexuality made in 2013.

He did, however, say that some politicized behaviors of the gay community can be condemned for being "a bit offensive to others."

Francis then expanded his apologetic stance to include other groups marginalized by the church.

"I think the church must not only apologize ... to a gay person it offended, but we must apologize to the poor, to women who have been exploited, to children forced into labor, apologize for having blessed so many weapons," he said.

After Pope Francis' press conference, Vatican spokesman Rev. Federico Lombardini told reporters that the pope was not referring to a medical "condition" when speaking about gay people, but rather a lifestyle.

Francis first made his "Who am I to judge?" comment during an airborne press conference in 2013, signaling a new era of acceptance for gays in the church.

Many gay Catholics, however, are waiting for concrete progress after a two-year consultation of the church on family issues failed to chart out new avenues for them.

A Roman Catholic priest, who announced he was in a gay relationship the eve a key synod on family, has lashed out at the Catholic Church. Krzystof Charasma was defrocked for "failing to abide by his vow of celibacy." (28.10.2015)

Pope Francis has said he is willing to establish a commission to study whether women can become deacons in the Catholic Church. The move signals openness to letting women take part in a currently male-reserved ministry. (12.05.2016)

“Gay people should not be marginalized.” That recent remark from Pope Francis has drawn huge attention. But was he signaling a new position toward homosexuals, or was he just misunderstood? (31.07.2013)