The pontiff has met a search team - and one of their dogs - from a region of central Italy, where a recent earthquake killed almost 300 people. Labrador Leo helped dig out a four-year-old from underneath the rubble. 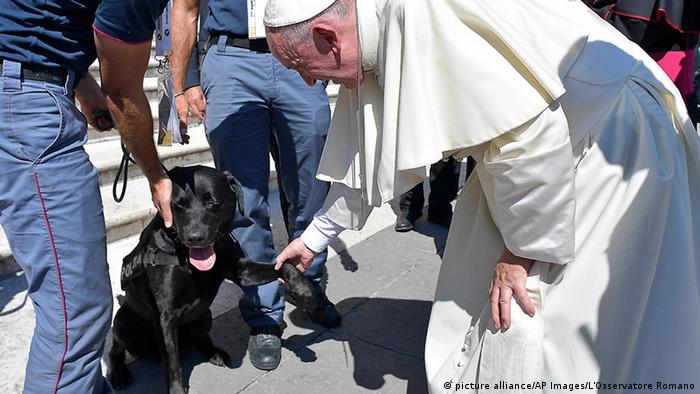 For people in Kolkata, Mother Teresa is already a 'saint'In a speech to volunteers at the St. Peter's square on Saturday, Pope Francis lauded helpers who assisted in the aftermath of the tremors. The Pope criticized those who "turn the other way not to see the many forms of poverty that begs out for mercy."

He hailed the volunteers as "artisans of mercy." He also petted Leo the labrador, who helped rescue a four-year-old who spent over 16 hours under piles of quake rubble. Leo raised a paw in greeting, which the pontiff grasped. Leo also met German Chancellor Angela Merkel last week, when she paid a visit to the disaster-struck region.

At least 294 people died after a massive earthquake on August 24 in central Italy devastated several hamlets, including the town of Amatrice, which lost nearly 233 residents.

"The credibility of the church lies in convincing," the Catholic leader said, adding that the world needed "concrete signs of solidarity, above all when faced with the temptation toward indifference."

Amatrice – the site of a catastrophe