In a Vatican audience, the pope reiterated his desire to visit Baghdad, despite security concerns. He also called out Western hypocrisy for claiming to promote peace while selling weapons abroad. 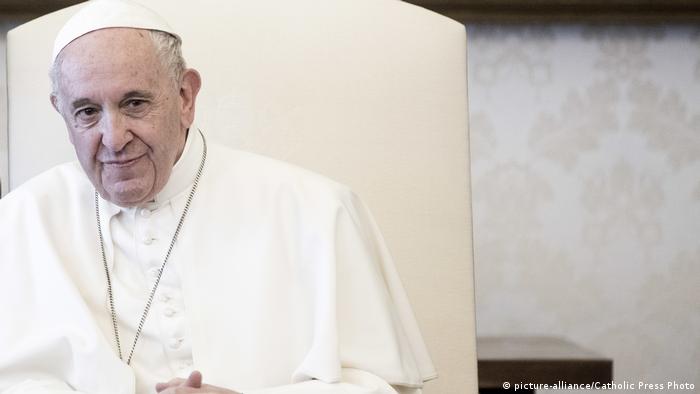 Pope Francis spoke about the Middle East during a Pentecost Monday audience at the Vatican, part of the pontiff's push to strengthen interfaith dialogue.

Francis said he would like to visit Iraq next year, having recently returned from the United Arab Emirates and Morocco, during a talk with representatives from charity organizations that serve Eastern Europe and the Middle East.

"An insistent thought accompanies me when I think about Iraq, where I want to go next year, so that it can look to the future through peaceful and shared participation in the construction of the common good," he said.

He added his hope that Iraq "does not return to the tensions which come from the never-ending conflicts between regional powers."

The pope has spoken of his desire to visit Iraq before, prompting Cardinal Secretary of State Pietro Parolin to go for a preliminary visit last Christmas. Parolin has said that he does not believe Baghdad is yet safe enough for a papal trip.

Western countries 'speak about peace and then sell weapons'

On the subject of safety and conflict, Francis also used his talk on Monday to highlight the evils brought up by international weapons exports. This a topic hotly debated in Western countries like the US and Germany, where opposition politicians have been accusing their governments of supporting repressive regimes like Saudi Arabia, which is using the weapons in conflict zones like Yemen, where thousands of civilians have been killed.

The pontiff chastised Western countries that "speak about peace and then sell weapons for these wars."

He went on to specifically criticize European nations that close their ports to refugees, but open them to boats carrying deadly weapons.

Shortly after being elected in 2013, Francis made friendship between Christians and Muslims a top priority. On one of his first major trips abroad, he brought two friends from his native Buenos Aires, a rabbi and a Muslim professor, on a trip to the Middle East, where he condemned religious hatred.

Although Pope Francis wants the Balkan nation to open its hearts and homes to migrants, there is considerable opposition to refugees in Bulgaria. Ties with the Catholic Church are also not warm. (05.05.2019)