The pope held an impromptu meeting with abuse victims as part of his official visit to Germany. According to Vatican officials, the pontiff was left "deeply shaken" by the experience. 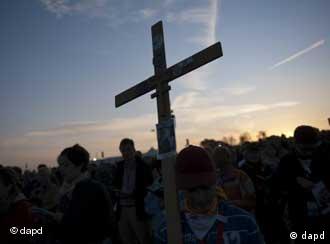 The pope also held sunset prayers in the Eichsfeld region

During his 30-minute meeting with victims, Vatican sources reported that the pope was "moved and deeply shaken" by the suffering they had experienced.

"The Holy Father expressed his deep compassion and regret over all that was done to them and their families," said the Vatican statement, describing the meeting as "very, very emotional."

According to the news agency AFP, coordinator of the visit Hans Langendörfer said that the pope met five victims of abuse; three men and two women.

The meeting was held in a seminary in the central German city of Erfurt, and was similar to those held on official visits to other countries. 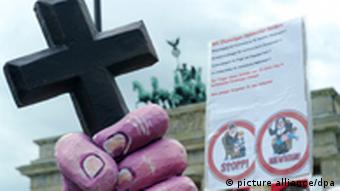 Berlin saw protests against the Church's response to abuse scandals

During his flight to Germany on Thursday, Benedict told reporters that he sympathized with the thousands of Catholics who had abandoned Catholicism in the wake of the recent pedophile scandals.

"I can understand that in the face of such reports, people, especially those close to victims, would say 'this isn't my Church anymore'," the pope was reported as saying.

Victims' associations have complained that not enough has been done to bring perpetrators to justice since a series of scandals over the abuse of children by clergy broke last year.

That view was echoed by German victims who joined 8,000 protesters on a march through Berlin on Thursday.

Show of unity between churches

Chancellor Angela Merkel, daughter of a Lutheran pastor, attended the service in the traditionally Protestant city, where atheism is also widespread after four decades of communist rule as part of the former East Germany.

The largest crowd so far of Benedict's four-day visit, 90,000 people, attended a tiny Catholic chapel in the Catholic region of Eichsfeld, for an open-air prayer session at sunset.

On Saturday the Pope was due to move on to his next destination, Freiburg, in the southwest of Germany.

"Welcome home!" That's how the German president greeted Pope Benedict XVI on his arrival in Berlin. The pontiff was given a ceremonious welcome, but said his aim was to give Catholics courage to stay true to their faith. (22.09.2011)