Pope Benedict XVI used a service at Jerusalem's Yad Vashem memorial to express "deep compassion" for the victims of the Holocaust. But Jewish leaders in Germany and Israel criticized the pope for not going far enough. 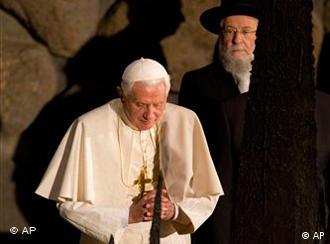 The 82-year-old pontiff moves on to Jewish and Muslim holy sites at the heart of the Middle East conflict on Tuesday as his Middle East visit continues, but debate and criticism over his speech at his first port of call remains loud.

On Monday, the pontiff prayed at the Yad Vashem Holocaust memorial in Jerusalem, where he said the suffering of Holocaust victims should never be forgotten, denied or belittled, adding that the Nazi murder of six million Jews was a "horrific tragedy."

But his speech at the memorial left many unimpressed.

Charlotte Knobloch, the president of the Central Council of Jews in Germany, told Germany's Bild newspaper that, while the pope’s call to fight anti-Semitism gave “a positive signal,” his overall speech was “half-hearted.”

Knobloch said that the pope could have used the visit and the speech to state the Vatican’s clear dissociation with the anti-Semitic Pius Brotherhood, a radical sect of ultra-conservative Catholic priests.

She added that the Council had hoped for “clear words from the pope” on the stance of the Holy See against Holocaust deniers and anti-Semites associated with the Catholic Church. While disappointed that the pope did not make a stand, Knobloch said the Council was still hopeful that the Vatican’s position would be made clear “as soon as possible.”

Benedict came in for fierce criticism, not just from Jews, for his decision in January this year to rescind the excommunication of Holocaust-denying Bishop Richard Williamson, a member of the Pius Brotherhood.

Meanwhile, in Jerusalem, the chairman of the Yad Vashem Council, Rabbi Meir Lau, said that while the speech was "moving," it lacked "an expression of empathy with the sorrow." 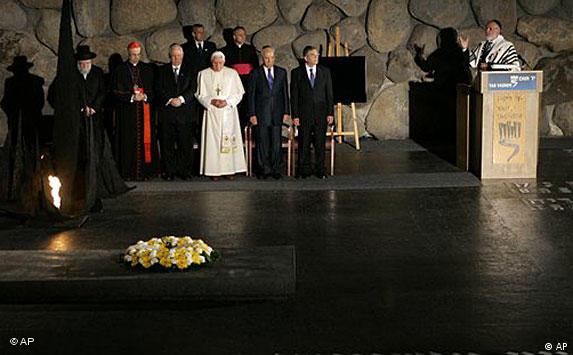 "Something was missing. There was no mention of the Germans or the Nazis who participated in the butchery, nor a word of regret," Ha'aretz newspaper quoted Lau, a Holocaust survivor, as saying. "There certainly was no apology expressed here."

Avner Schalev, a Memorial Center official, told journalists that the papal visit was "important and positive," describing the speech as a step forward. But he added he had expected more condemnation of the Holocaust. Schalev said that the pope could have been more "personal" in his Yad Vashem speech and referred to the perpetrators by name.

The pope told those gathered at the Yad Vashem Holocaust Memorial Center that the names of the victims and the suffering they endured, should always be remembered.

"May their suffering never be denied, belittled or forgotten," the German-born pontiff said, as he stood, somber-faced, in the center's granite Hall of Remembrance, where the names of the Nazi extermination centers are inscribed on the floor and a memorial flame burns continually.

"May the names of these victims never perish. ... And may all people of goodwill remain vigilant in rooting out from the heart of man anything that could lead to tragedies such as this," he remarked.

He honored the "millions of Jews killed in this horrific tragedy" saying, they may have "lost their lives, but they will never lose their names."

"One can rob a neighbor of possessions, opportunity or freedom. One can weave an insidious web of lies to convince others that certain groups are undeserving of respect. Yet, try as one might, one can never take away the name of a fellow human being," the pope said.

"As we stand here in silence, their cry still echoes in our hearts. It is a cry raised against every act of injustice and violence. It is a perpetual reproach against the spilling of innocent blood," he said.

Prior to his remarks, the pope laid a wreath at the memorial flame, and stood motionless for several seconds, head bowed in silent contemplation.

Pontiff continues with tour, despite criticism

The pope will try and leave controversy behind as he continues with his tour of the Middle East by celebrating mass in Jerusalem's Valley of Kidron and holding talks with Jewish and Muslim religious leaders as well as representatives of the various Catholic rites in the Holy City on the second day of his five-day visit to Israel and the occupied West Bank.

Benedict will become the first pope to enter the Dome of the Rock on Al-Haram Al-Sharif (the Noble Sanctuary), also known as the Al-Aqsa Mosque compound, which is Islam's third holiest spot.

The site, which the Jews call Temple Mount, is also the holiest in Judaism and has been a major flashpoint in the Israeli-Palestinian conflict, where the latest Palestinian uprising erupted in 2000.

Pope John Paul II had visited the compound during his landmark 2000 pilgrimage to the Holy Land, but did not enter the Dome of the Rock, whose huge golden cupola is seen as Jerusalem's main landmark.

Benedict will meet the mufti of Jerusalem at the mosque compound, before heading to the Western Wall which it overlooks.

Also known as the Wailing Wall, the sacred site is the top pilgrimage destination for the world's Jews.

He will then hold talks with the two chief rabbis of Israel.

In the afternoon, the pope will celebrate mass in Jerusalem's Valley of Kidron, between the Mount of Olives and the walls of the Old City. Many Christians believe this is the Biblical Valley of Jehoshaphat where God will sit in divine judgement at the end of time.

Benedict will also meet representatives of the various Catholic rites, which include Melkites, Maronites, Chaldeans, Armenians and Syrians.

Pope Benedict XVI enters the most sensitive leg of his Middle East tour as he visits Israel and the Palestinian territories. (11.05.2009)

Thousands turn out for papal mass in Jordanian soccer stadium

Pope Benedict XVI has held a public outdoor mass for thousands of believers, in a stadium in Jordan's capital, Amman. Catholics from across the Middle East attended the service. (10.05.2009)