Politicians call for re-examination of 1967 Ohnesorg murder | Germany | News and in-depth reporting from Berlin and beyond | DW | 24.05.2009

The news that the perpetrator of a 1967 shooting was a spy for East Germany's Stasi secret police has sent shockwaves through Germany, shedding new light on the country's postwar history, amid calls for a fresh inquiry.

Benno Ohnesorg died in the ambulance on the way to the hospital.

Schily, who, before becoming a Social Democrat and interior minister, was a Green party activist and defense lawyer for leftist German terrorists, said the new Stasi revelations meant the case had to be "politically and juristically re-evaluated."

"The files require a very precise re-examination," he said.

Niebel of the FDP urged all parties in parliament "without delay to make way for a no-holds-barred inquiry into Stasi involvement in the old West Germany."

Berlin's former SPD mayor, Klaus Schuetz, said the pension claims of the policeman, who shot and killed Ohnesorg, also needed to be reassessed.

"There is no statute of limitations on murder"

The policeman, Karl-Heinz Kurras, is still alive. He's 81 years old and could face a new trial. Charges have already been brought against him by Carl-Wolfgang Holzapfel, head of an organization for the victims of Stalinism.

The death of Ohnesorg triggered a wave of violent protests across Germany.

"There is no statute of limitations on murder," Holzapfel said in a statement released after historians sifting through old files of East Germany's Stasi discovered the link to Kurras.

But, since the files apparently do not contain information suggesting that the Stasi explicitly ordered the liquidation of Ohnesorg, it is unlikely that Kurras would be convicted.

26-year old Benno Ohnesorg was shot dead on June 2, 1967, after demonstrations protesting the visit of the Shah of Iran to Berlin had turned violent.

The bullet came from Kurras who was a West German policeman. After the shooting, he was tried for reckless manslaughter but acquitted due to a lack of evidence.

After the shooting, the Stasi broke off communications with their spy in West Berlin in a final message which read: "Destroy all material. Cease work for now. Event is viewed as very regrettable accident."

The incident was a watershed in German politics

The case threw Germany into chaos. Student protests, which so far had been peaceful, took a sharp turn, becoming more radical and violent. The death of Benno Ohnesorg triggered a wave of terror and became the justification for some to take up arms against the state. 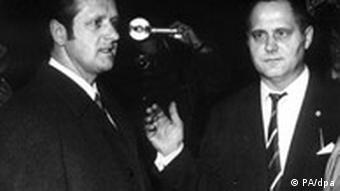 Karl-Heinz Kurras (left) was on trial twice but both times aquitted.

The so-called Red Army Faction (RAF) under its leaders, Andreas Baader and Ulrike Meinhof, began a campaign of violence against Germany's political and business elite, culminating in 1977 in what became known as the "Deutsche Herbst", or German Autumn. The RAF is believed to be responsible for more than 30 murders and only ended its reign of terror in the early 1990s.

Jochen Staadt, a historian and head of research on the former East German communist party at Berlin's Free University, says that the mere possibility that the killing had been planned by the Stasi means that history will have to be re-written.

New information indicates that the killer in the controversial shooting of student protester Benno Ohnesorg in Berlin in 1967 was a West German policeman who was also working for the East German Stasi secret police. (21.05.2009)

Forty years after the assassination attempt on the leader of the 1968 student movement, Rudi Dutschke, Germany is looking back on a time when young people demanded societal change -- and went on the streets to get it. (11.04.2008)